The possibility that a llama antibody holds promise for a treatment for Covid-19 burst into the news recently. And this is just the latest of the many ways that llamas, originating in the Andes Mountains of South America, have been of great value to human societies over thousands of years. From food and fiber to sacrificial offerings in ancient Andean rituals, to recent western US trends of “livestock guardians” and wedding party participants, read on to learn things you may not have heard about llamas.

1) Llama antibodies inhibit the virus that causes Covid-19. Humans produce one type of antibody; llamas produce two types. One of the llama types is only about one quarter of the size of the human antibody and can be successfully linked or fused with the human antibody. Research on llama antibodies that began in 2016 led to the discovery that the coronaviruses MERS CoV and the SARS CoV-1 could be neutralized.  In January 2020, the researchers successfully used a llama antibody to inhibit SARS CoV-2, responsible for Covid-19 illnesses. The study is described in the May 5, 2020 research journal Cell.

2) Llama breeding from the 1980s into the early 2000s was a BIG business in the US. Somehow, it became fashionable to own llamas. Around this time, I crossed professional paths occasionally with a seismologist from New York who bred llamas as a side gig. He would regale my colleagues and me with llama tales; we were mystified by this burgeoning business. In 1986, a record price was reportedly paid for a llama in Salem, Oregon: $220,000.  Amazing! The llama breeding bubble eventually burst following the real estate crash in 2007, and the llama population in the US has been dwindling ever since. There isn’t a huge market for llama meat, fiber or backcountry pack animals; batting long eyelashes and looking soft and cuddly can only get you so far – although it does work quite well for some party (and therapy) animals.

3) Llamas are the only native American beast of burden. They belong to the camelid family, which evolved in and was restricted to North America for more than 40 million years. Then about 3 million years ago, the Isthmus of Panama connected the North and South American continents, prompting animal migrations between the continents. Some camelids moved south into the Andes Mountains and adapted to the cold with warm coats. Over time these camelids evolved into guanacos and vicuñas, which became the wild ancestors of domesticated llamas and alpacas — icons of the Andes. 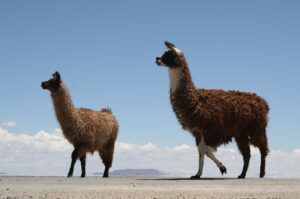 4) Llamas were domesticated in the Andes Mountains by about 4,000 to 5,000 years ago. Selectively bred from guanacos, llamas are larger than their wild relatives, standing as tall as 6 feet and weighing up to about 400 pounds. They were reared to serve as sturdy pack animals capable of carrying loads of up to around 80 pounds. For the ancient Andeans, llamas provided beneficial products including meat, fiber, tallow, and bones that were used for tools. Their dung was valuable as fertilizer in fields and as an efficient fuel where wood was scarce. (Alpacas, descended from vicuñas, were domesticated specifically for their soft and lustrous pelts.)

5) Llamas are intelligent and inquisitive animals that are admirably adapted to rugged conditions in high mountains. Their camel heritage gives them a complex plumbing system that allows them to survive on much less water than other animals. Instead of hooves, they have two-toed feet with toenails and soft foot pads that move, allowing a solid grip on steep and rocky terrain. Llamas prefer to live in social groups and are independent-minded. When overloaded or simply tired of carrying loads, they lie down and refuse to move. When annoyed they can kick and spit.

6) Llamas formed the basis for wealth for the Incas and other Andean cultures and were pastured in herds numbering in the tens of thousands.  Llamas filled an essential role in carrying trade items in large caravans. (The indigenous Andeans didn’t use wheels.) During Inca times, armies on the move in far-flung military expeditions used large pack trains of llamas to carry supplies. The animals could be given as gifts or items of tribute and when they were no longer needed as beasts of burden, they provided a convenient source of food. 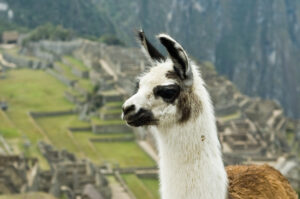 7) Llamas held an important place in the ceremonial lives of the ancient Andeans. They appeared in origin stories, were mummified and placed in the tombs of dignitaries, and were an important sacrificial animal for offerings to the deities. A particularly poignant religious ritual was carried out by the coastal Chimú people under the duress of what was likely severe El Niño-induced flooding early in the fifteenth century. Near the modern city of Trujillo, Peru, a mass sacrifice was conducted in an area of sand dunes close to the crashing waves of the Pacific Ocean. Large pits were excavated through a layer of mud into the clean sand of the dunes, and in the pits were arranged more than 140 boys and girls, along with more than 200 young camelids (probably llamas, possibly some alpacas). As horrific as this ritual sacrifice appears, it also provides an indication of the absolute desperation authorities faced in appeals to their deities to stop the devastating rains and flooding.

8) Llama fiber is at the base of a long and rich textile tradition in the Andes. Llama fleeces have coarse outer guard hairs and a fine undercoat with hollow fiber shafts that provide great warmth and thermal insulation even when wet. The outer guard hairs were utilized for ropes and rugs, and the soft undercoat for garments.  Llama and alpaca fleeces do not contain lanolin, a type of wax that is part of sheep wool. The absence of lanolin makes the llama and alpaca fiber hypoallergenic.

9) Llamas by the tens of thousands were used to support mining operations during the Spanish Colonial period in Peru and Bolivia. The largest mines operated by the Spanish were at Potosí, opened in 1545 to recover huge deposits of silver-rich ore, and at Huancavelica, where cinnabar was mined to supply the mercury used in silver processing. Llama mortality was high, so the native animals were eventually replaced by mules brought from Spain. The mules, as well as other Eurasian animals including sheep, hogs, and cattle, were imported by the thousands to supply the mining communities. Severe overgrazing and erosion followed the introduction of these animals, in part because of the damage caused by the sharp hooves of the Eurasian stock, which replaced the broader and softer feet of the llamas.

10) Llamas can be fierce protectors of sheep, goats, and hens from predators such as coyotes, foxes, and dogs. Llamas have been used as “livestock guardians” on ranches in the western US since the 1980s, defending flocks against coyotes and dogs in effective predator management. A llama protecting a group of animals will make an alarm call and run towards an intruder; they are known to have injured or even killed predators. A single llama works best, as multiple llamas will bond with each other and then ignore the other animals.

You probably learned some of the information above if you read the two posts I wrote about llamas in November 2019: Mug Shots: Llamas and Alpacas and More Alpaca and Llama Lore. So as a bonus, more information that you might not know is below. 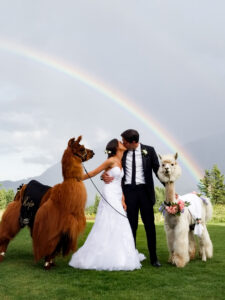 11) Llamas are currently trendy!  Instagram is packed with llamas  – “Wedding Llamas” based in Portland, OR has gorgeous photos with beautifully coifed and flower-bedecked llamas, alpacas and wedding parties (photo above; also see information on the therapy work by this organization, below). Then there are ongoing stories about a jet-setting toy llama in “Llama With No Drama”, an Instagram account with more than 140,000 followers. For the past few Decembers there have been lots of Christmas-themed “Fa La La La Llama” products, as well as others decorated with “Happy Llamakkah”. Amazing (again)!

12) While researching this post, I came across a company named Wilderness Ridge Trail Llamas. They conduct llama-supported day hikes and multi-night camping trips in Capitol Reef National Park in Utah. Since this park is one of my all-time favorites, the combination of hiking in Red Rock country with a llama is irresistible! This is definitely on my To Do Soon list!

Mtn Peaks Therapy Llamas & Alpacas provided the photo from @weddingllamas. The founders of this 501(c)(3) non-profit organization are the sponsors of educational programs and a vounteer therapy program. The therapy program brings llamas and alpacas to children’s hospitals, rehabilitation facilities, senior communities, and many other special-needs organizations, recognizing that specially selected and trained animals can bring healing and happiness to people. The weddings and other special events the animals participate in help to support the therapy program.