Machu Picchu, the mountain citadel high in the Andes Mountains of Peru, is a familiar icon of the Inca Empire. Perched high on a steep and narrow ridge between two mountain peaks, the site is ringed on three sides by the Urubamba River, a dizzying 1,600 feet below. Located in a region subject to high rainfall, landslides, earthquakes and other natural hazards, the Inca builders faced many daunting challenges. Clearly, they had a comprehensive knowledge of engineering techniques, as without this, Machu Picchu would surely have crumbled away long before now.

The Inca ruler Pachacuti is believed to have ordered the construction of Machu Picchu. It was probably a religious center and place of retreat for the royal Inca family and high priests, although no one knows for certain. Construction began around 1450 CE and archaeologists estimate that at least 50 years were required to complete the estate. The site was probably abandoned sometime after the Spanish conquistadors marched into Peru in 1532; fortuitously, Machu Picchu was never found by these plunderers. Jungle vegetation rapidly enveloped the site, and it remained hidden from view, known only by a few local inhabitants for centuries. In my visits, and in digging into the literature about this impressive construction project, I have found some interesting surprises. 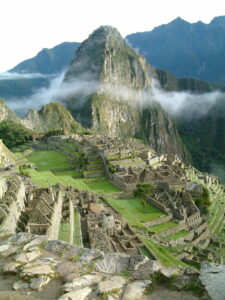 1) The primary reason that Incan builders selected this ridgetop. The builders of Machu Picchu likely examined many mountain sites before finding a location suitable for a royal retreat. The key to the location they chose: a reliable water supply. Two faults, the Huayna Picchu fault and the Machu Picchu fault, form a down-dropped structural block, or graben, upon which the estate was built (elevation about 7,900 feet). A natural spring high on the north slope of Machu Picchu Mountain provides a year-around water supply to the city. It is unusual to find a spring at such a high elevation in the mountains, but this perennial spring is fortuitously related to the presence of the Machu Picchu fault.

The fractured and permeable rock along the fault zone allows rainfall to infiltrate the rock and then emanate at the spring site. The reliable yield of the perennial spring was enhanced by a well-engineered stone block water collection system that is still operational today. A series of long canals, and an impressive sequence of 16 stone-lined fountains, provided the domestic water that cascaded through the urban sector of the estate.

The water yield of the spring varies from season to season, depending on the amount of rainfall.  During times of seasonal low water flow, ceramic water jugs may have been used to carry water uphill from the Urubamba River; a labor-intensive, but reliable backup domestic water supply. This river provided another important advantage for the Machu Picchu site: excellent natural defenses.

2) Stone blocks are provided by a “natural quarry.” The suitability of the rock available for construction at Machu Picchu was surely an important consideration in site selection. The bedrock at the site is a white to grayish granitic rock – stable and durable for construction. Millions of years of mountain building throughout the Andes have folded this rock, in the process, opening joints or cracks in regular patterns across large areas. In some areas of exposed rock, these joints break the material into roughly rectangular blocks that are suitable for collection and use in construction.

Many thousands of tons of stone needed to be moved and fit into place to build Machu Picchu. Fortunately, a convenient “natural quarry” was located on the ridgetop. On the western edge of Machu Picchu, ancient rockfalls and landslides created an accumulation of fractured granitic blocks that could be used by the ancient builders.

Deep foundations and an efficient drainage system beneath the flights of terraces and beautiful stone buildings were essential. The drainage system allowed heavy rains to percolate thru the terraces and drain down the mountainside with minimal soil erosion. Without this extensive site preparation, deterioration would have occurred rapidly as terrace fills settled and the buildings crumbled.

Each of the terraces contains a lower layer of boulders, a middle layer of gravelly dirt; and a top layer of soil, suitable for cultivating crops as well as for foundation stability. All these layers were placed by hand, including the 1 to 2 feet or more of topsoil, most of it likely carried in baskets from the Urubamba River floodplain far below. 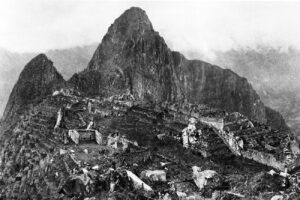 4) The mystery of the missing gold and silver. Hiram Bingham was the American historian who stumbled across the walls of the spectacular site of Machu Picchu in 1911. Subsequently, funded by Yale University and the National Geographic Society, Bingham organized several archaeological expeditions to Machu Picchu. Thousands of artifacts, including mummies, stone and metal tools, and ceramics, were collected from the site. Curiously, among all the items that Bingham and his team retrieved, they didn’t find any of the legendary gold or silver objects of the Incas. Many decades later, only a single gold bracelet was found buried within an ancient foundation wall.

Shortly after my first trip to Peru in 2005, I came across some interesting information about Machu Picchu that most likely explains the mystery of the missing gold and silver. In the late 19th century, several decades before Bingham arrived in Peru, Incan artifacts began to appear in many European palaces and museums. Researchers believe a German businessman named Augusto Berns was responsible. Herr Berns operated a lumber mill in the town of Agua Calientes directly below Machu Picchu in the 1860s. A mining concession for extracting wood and gold was held by his company, allowing goods to be transferred out of the country. Machu Picchu was most likely the “gold mine” harvested, pointing to Berns as the source of the Inca treasures sold in Europe. By the time Bingham reached the city, all of these riches had vanished.

5) A Cache of Obsidian Pebbles. During Hiram Bingham’s 1912 investigations of Machu Picchu, a handful of small obsidian nodules were found buried in a cache near the entrance to the city. The obsidian is in the form of naturally rounded and unworked pebbles, carried for many miles and apparently left as some sort of offering. Distinctive geochemical “fingerprints” based on trace element composition allow obsidian from archaeological sites to be matched with the volcanic source. The pebbles found at Machu Picchu are from the Chivay source, approximately 200 miles away to the south. Perhaps the obsidian was intended as a link between Machu Picchu and the volcanic powers of the Chivay region. We will never know. Machu Picchu holds many mysteries. 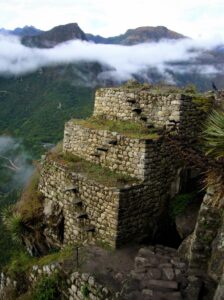 Photograph of Machu Picchu taken by Hiram Bingham III in 1912 after major clearing and before reconstruction work began — https://en.wikipedia.org/wiki/Machu_Picchu#/media/File:Machupicchu_hb10.jpg

If you like my posts, please scroll down to the bottom of this page and leave your email address on my website. You’ll receive messages only when I publish a new post (about once a week) and my occasional newsletter. Join now to stay up-to-date about culture, geology, geography, and history.