Volcano-watchers have had lots of excitement lately with the ongoing eruptions on the Reykjavik Peninsula in Iceland (aka Geldingadalir, Fagradallsfjall, and/or Krýsuvík-Trölladyngja [glad that I can copy and paste]) and Soufriere, on the West Indies island of Saint Vincent in the Caribbean. Although the latter, especially, is causing major disruptions for nearby populations, so far both eruptions are fairly small. Colorful graphic representations of the relative sizes of volcanic eruptions are intriguing to me, although they also convey only part of the story. The variability in natural events confounds human attempts to assign neat boxes or bubbles to these phenomena.

The figure above shows several of the large eruptions I’ve written about in recent blog posts about Western US volcanic activity (specifically, Yellowstone, Long Valley Caldera, Mount St Helens, Mount Rainier and Crater Lake/Mount Mazama). I’m familiar with most of the eruptions shown that are in other parts of the world–but the huge eruption named Wah Wah Springs stumped me. Where on earth is THAT ONE? I had no idea! Turns out that this eruption exploded around 30 million years ago during a major period of volcanism in the Great Basin; it is the largest of the Indian Peak-Caliente Caldera Complex eruptions. Today, the volcanic rock left behind from the Wah Wah Springs eruption reaches thicknesses of 13,000 feet deep and can be found on either side of the state border between southern Nevada and Utah.

Comparing the sizes of natural phenomena such as earthquakes and volcanoes is challenging, as these events have a wide range of characteristics. Attempts to estimate sizes of events in the past is even more problematic, yet provides valuable knowledge for evaluating probabilities of future occurrences. Most of us probably understand earthquake magnitude scales better than comparisons of the relative sizes of volcanoes. (The damaging earthquakes we hear about in the news are usually magnitude 6.5 or larger; if you live where earthquakes occur regularly, you know a nearby magnitude 2 or 3 can give a good shake.) Earthquake magnitudes are typically ranked from 1 to 8 or larger, using a logarithmic scale so each interval increase of one represents an order of magnitude, or tenfold increase in energy release. A similar index is used to estimate the explosive power of volcanoes. 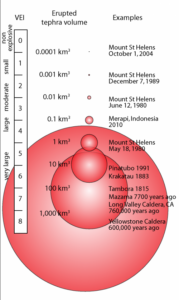 Developed in 1982, the Volcanic Explosivity Index (VEI) is a useful tool that combines quantitative and qualitative measurements. This approach uses volume of fragmental material erupted, eruption cloud height, how long the eruption lasts, and other quantitative and qualitative assessments. The volume of material ejected from a volcano is commonly expressed in cubic kilometers; one km3 is roughly equivalent to 0.24 cubic mile.

Fragmental material ejected from a volcano, called tephra, includes fragments of any type and size, from fine ash to large bombs. Non-explosive eruptions with small volumes of fragmental material have a value of 0. For VEI-3 and above, the scale is logarithmic.

Small volcanic eruptions are typically effusive, characterized by lava flowing from a vent instead of explosions of material. This is the current situation in Iceland and characteristic of recent Hawaiian eruptions. For some spectacular explosive eruptions–for example, that of Eyjafjallajökull in Iceland in 2010–massive volumes of fragmental material aren’t produced and for ancient volcanoes, only the distribution of lava and tephra across the landscape is available. Other estimation measures need to be used. These involve calculations of “dense-rock equivalents”, or DRE, to correct for void spaces such as bubbles in the lava, and to arrive at an estimate of the original volume of material erupted. These assessments are an alternative way to rank volcanoes, as in the figure below.

Engineers and scientists have grappled with similar variations in earthquake energy release, so there are many index scales in use. Most information for general audiences simply omits the magnitude scale or uses “Richter” magnitude, but the latter was developed in 1935 and has largely been replaced by other scales. Nonetheless, the name continues to be used. Explaining different magnitude scale considerations and nuances is complicated. 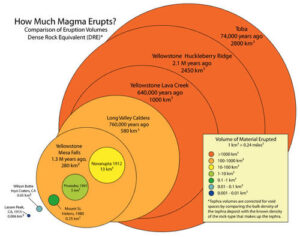 The Pinatubo eruption on the island of Luzon in the Philippines is shown on each of the three figures above. Assigned a VEI 5 or 6 (depending on where you look), scientists predicted this eruption and thousands were evacuated, saving many lives. The effects were felt worldwide, including ash clouds and a sulfuric acid haze that extended around the globe.

Volcanic eruptions with a VEI-8 are dubbed supervolcanoes. When an enormous quantity of molten material erupts from a magma chamber, the overlying rock can collapse into the void below, forming a circular caldera that is a typical feature of a major eruption. Eruptions in Yellowstone and the Wah Wah Springs events are assigned VEI-8. No eruptions with VEI-8 occurred in the Holocene, or the past 11,700 years, but there have been at least 10 VEI-7 eruptions during that time.

Large and dramatic volcanic events are infrequent, but there are active volcanoes throughout much of the Western US and this highlights the need for people to be informed about these hazards. Science education in schools, and outreach programs by USGS and other organizations, support community preparedness. 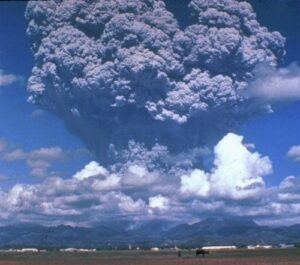 Most of the information in this post came from the US Geological Survey website (usgs.gov) and Wikipedia (an excellent source of information with web links to references; I send a contribution to the organization each month because I want it to thrive.)

Figure showing VEI Index, a relative measure of the explosiveness of volcanic eruptions, devised by Chris Newhall of the US Geological Survey and Stephen Self at the University of Hawaii in 1982. Newhall and Self, 1982.  https://volcanoes.usgs.gov/vsc/glossary/vei.html