A Foundation of Copper

A Foundation of Copper

Gold and silver were revered by the Incas and their ancestors – and copper was also widely used, but not as highly regarded. An Inca myth gives insight into the cultural significance of these metals. In this story, Earth lacked people and so the Sun, who needed worshipers, sent three metal eggs to Earth — one gold, one silver and one copper. The gold egg produced noblemen, the silver egg produced noblewomen for their wives, and the copper egg produced common people. As in the myth, the Incas preferred gold and silver metals, but copper was also needed. In metallurgy, copper provides strength and support when combined with gold and silver in alloys — similarly, the service of commoners is needed to sustain the elite members of society.

Copper is likely the metal most frequently used in the Andes. Decorative beads from copper ore were produced as early as 5,500 years ago in the arid Atacama Desert of modern northern Chile. Copper objects were used in ritual activities, including as offerings in burials. Jewelry, small tools such as tweezers and needles, and knives were made from copper. Copper was also used as an important addition to gold and silver metalwork, as the combinations helped to give desired color, malleability, and other improved properties to the gold and silver alloys. 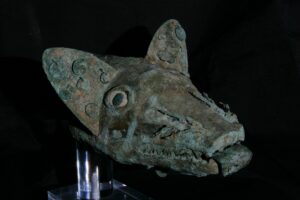 The ancient Andeans worked copper-tin and copper-arsenic alloys, known generically as bronze. The earliest bronze objects have a very low tin content, and archaeologists suspect that trace amounts of tin were naturally introduced as natural alloys in copper ore.  This unintentional addition led to the adoption of bronze production, which was improved through experimentation with different alloys. Bronze was especially useful for tools such as axes, chisels, knives, needles and hooks. Iron artifacts are absent from the archaeological record of the Incas and their ancestors, as Andean technology did not evolve beyond the use of copper-bronze. 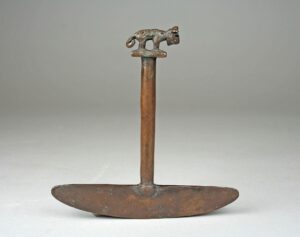 Copper ores are abundant in the central Andes, typically in natural associations with gold, silver, tin, and other metals. Water that reaches exposed or shallowly buried copper ore produces secondary copper minerals. Green malachite (hydrous copper carbonate) and blue chrysocolla (hydrous copper silicate) are especially common in the oxidation zones of Andean copper deposits. These (gorgeous!) colored minerals were used for decorative blue and green pigments on cloth, as well as for jewelry, early in prehistory.

The luster and color of metals were of primary importance to the ancient Andeans. They utilized metals for practical tools and aesthetic goods, in contrast with the Old World cultures of Asia, Africa and Europe, where weapon production became a major focus of metalwork. And the copper egg of the Incan myth may have provided the greatest benefit to humans. Just depends on your perspective.