A Lighter Side of Lithium – Part 1

A Lighter Side of Lithium – Part 1

Electric vehicles (EVs) are the wave of the future. Improvements in lithium-ion battery packs are occurring rapidly and prices are falling. Although EVs currently constitute only about 3 percent of the global auto market, that number is expected to rise quickly. Among the events pushing the process along: President Biden has ordered development of a plan to replace the Federal fleet of some 645,000 vehicles with all-electric models produced in the United States. There is a lot going on with lithium, and in two previous posts I describe this versatile metal and where it is found; you can check out these posts here:  https://roseannechambers.com/leaning-forward-with-lithium/ and https://roseannechambers.com/where-lithium-lurks/ .

Obtaining sufficient lithium to meet the growth ahead for EV and other types of batteries has a dark side, involving open-pit mining and brine evaporation pools that can be devastating for the environment. Fortunately, there is also a lighter side that is gaining momentum. One approach that will have fewer adverse impacts is recovering lithium as a secondary process from brines produced during industrial operations.

Salty brines are a byproduct of many mining and power generation activities. Lithium-rich brines are especially common in active geothermal regions. Geothermal energy – produced from heat remaining from the Earth’s formation and generated by radioactive decay – has been popular for centuries for space heating and bathing (think: Roman and Turkish baths, accompanied by marble and mosaics…) 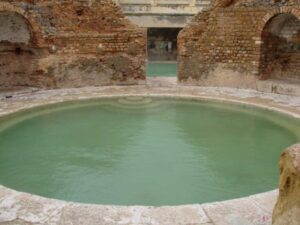 Generating electricity from geothermal sources is a 20th century development. The first successful geothermal electric plant in the United States was built in 1960 by Pacific Gas and Electric at The Geysers in northern California. Geothermal power has minimal land requirements and freshwater impacts, and it is highly reliable. Unlike solar and wind power, it is always available (a quality now appreciated by many more Texans, after their solar and wind power sources were shut down by the freezing temperatures of a February 2020 storm). At geothermal electric plants, hot fluids pumped from deep underground typically contain numerous elements, including some that are toxic, such as mercury and arsenic, but they can also contain valuable lithium. 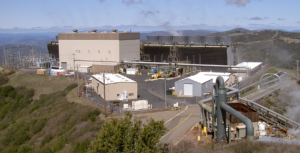 The Sonoma Calpine 3 geothermal power plant at The Geysers field in the Mayacamas Mountains of Sonoma County, Northern California.

New developments are making lithium extraction at geothermal power plants a reality. Super-heated brine beneath the Salton Sea in southernmost California has been targeted in efforts to extract this metal for many years, but none of the approaches were cost-effective. Now, a new California start-up has developed technology that is reportedly successful. Using an ion-exchange process, brine is pushed through special beads that selectively absorb lithium; once the beads are saturated, an acid is used to flush out the metal.

The company developing the bead-filled module technology, named Lilac Solutions, has tried their new technology successfully on brines from around the world. Now, Lilac intends to build a lithium extraction facility at the Salton Sea in partnership with an Australian firm that is planning a new geothermal power plant. Lilac is also reportedly working with Warren Buffett’s Berkshire Hathaway Energy to build a lithium extraction demonstration plant in the Salton Sea region. (Interestingly, 10 of the 11 geothermal power plants currently operating at the south end of the Salton Sea are owned by a Berkshire subsidiary.) The combination of electric power generation and lithium extraction would be far more lucrative than if either operation were to be conducted alone.

Geothermal resources have historically been limited to areas of high heat flow near tectonic plate boundaries – hence, California and Iceland – but technological advances are dramatically expanding the range of where these power plants can be installed. Specifically, so-called “enhanced geothermal systems” are in use in areas of dry hot rock. By injecting water into wells that are 2 to 3 miles deep, and then capturing the heated water from a second borehole to operate a steam turbine or other power plant system, enhanced geothermal systems can, in theory, be located anywhere on the planet. Drilling such deep wells is expensive, of course, especially because the best sites for these systems tend to be in hard granitic rocks. By extracting lithium and other valuable elements, including manganese, zinc and potentially even gold, the economic viability of the primary geothermal power operation can be enhanced.

Lithium can also be extracted from seawater. Relative to the brine from which most lithium is concentrated, seawater has a lithium content that is much lower, and so one of the challenges to large-scale recovery is the tremendous quantity of water that would require processing. Another challenge arises from the high concentration of sodium that interferes with lithium extraction selectivity.

Happily, clever scientists and engineers are coming up with new approaches. One that is promising is to use the waste stream remaining from seawater or brackish water desalination plants, which produce purified water and a reject stream of brine. By adding chemical reactants that precipitate desired constituents, lithium and other elements can be separated and precipitated. This is the good news – the bad news is the reality of freshwater scarcity. Demand for reliable freshwater supplies, from Southern California to the Middle East, is increasingly leading to the need for desalination plants worldwide (and that is a story for another day).

Another promising approach to avoiding the “dark side” of lithium mining is recycling. This is currently happening on an increasingly large scale — AND I found such interesting information that I need to put it into a second blog post. So please stay tuned; Part 2 of this post will be coming next! 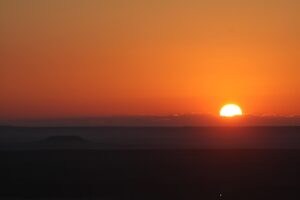 Feature photo of Spring sunrise in the Sahara, 2014, by Fabio Basagni. https://commons.wikimedia.org/wiki/File:Sahara_desert_sunrise.jpg

Photo of the Sonoma Calpine 3 geothermal power plant at The Geysers field in the Mayacamas Mountains of Somona County, Northern California.  https://en.wikipedia.org/wiki/The_Geysers#/media/File:Sonoma_Plant_at_The_Geysers_4778.png