A Lighter Side of Lithium – Part 2

A Lighter Side of Lithium – Part 2

Meeting increasingly high demand for lithium has a dark side of potentially damaging the environment and public health–but fortunately there is also a lighter side. Recycling can reclaim valuable metals, including lithium from the battery packs that might otherwise end up in landfills. An advantage of recycling is that over 90% of selected metals are recoverable and useable again. And then again and again. I describe recovering lithium as a secondary process from brines produced during industrial operations in a previous blog post I’ve written about lithium, here: https://roseannechambers.com/a-lighter-side-of-lithium-part-1/. Recovery and recycling could eventually reduce substantially the need to wrestle new metal supplies out of the ground.

Recycling electronic waste (e-waste) can be a nasty business. Standard methods involve smelters to burn up contents, in the process releasing toxic particles into the air. In the best cases, workers are wearing respirators and other protective gear, and plant facilities scrub smaller particles before release into the atmosphere. In the worst cases, children are dismantling the electronics and tossing the components into smelters. From some perspectives, sending e-waste to a local landfill is a more responsible choice than sending it to unregulated disassembly and incineration facilities overseas – surprising and disappointing for me to learn. 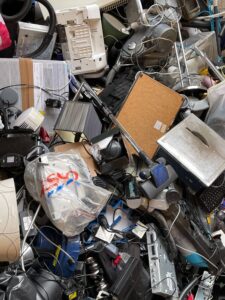 E-waste by John Cameron on unsplash.com

Battery contents typically are selectively removed and separated for reprocessing. Until recently, this has been chiefly because of the value of cobalt and copper constituents. Lithium is also recoverable and becoming more cost effective to extract.

My favorite recycling story begins with Tesla, Inc, the company founded in 2003 that has led the way in developing technology to provide affordable EVs for the masses. At the enormous Nevada Gigafactory operated by Tesla near Reno, the research, development and production of lithium-ion battery cells for EVs is underway in a partnership between Tesla and Panasonic (formerly named Matsushita Electric Industrial Co.).

Fortuitously, it turns out one of the co-founders of Tesla has focused his curiosity and intelligence on recycling lithium. JB Straubel was a founder and the fifth employee at Tesla, where he held the executive position of chief technologist for 15 years. In 2019, Straubel left Tesla to direct his energy toward Redwood Materials, the recycling company he established in 2017, also near Reno. The goal of this company is to “un-manufacture” the many Gigawatt-hours of batteries being built for EV cars and beyond. Redwood Materials is creating a sustainable circular supply chain by reclaiming the scrap generated in making battery cells at the Nevada Gigafactory, and in recycling of e-waste for companies including Amazon. 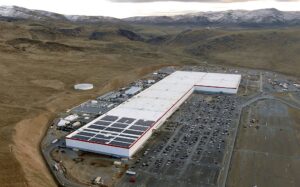 Seeking to learn more about Redwood Materials, I recently wrote to the company. I received the following informative response from Alexis Georgeson, Communications & Government Affairs:

Redwood is creating a closed-loop supply chain for electric vehicles and energy products…. Recycling of our scrap is only the first step: Redwood is currently developing processes to produce battery grade raw materials from our total processing activities to resell into the battery supply chain. We’ve partnered to do all the recycling from Panasonic at the Tesla Gigafactory and recently also formed a partnership with Amazon to recycle EV and other lithium-ion batteries and e-waste from parts of their businesses. We’re already the largest battery recycler in North America, receiving about 20k tons of materials a year….We’re recovering about 95-98% of the nickel, cobalt, lithium, copper, etc. from the batteries and focused on returning those raw materials back to battery and EV manufacturers.

Outstanding! I initially learned about Redwood Materials from a short video (sent to me by website reader Steve, to whom I am most grateful!) That video is here: Bloomberg’s Hello World . An interview with JB Straubel, and footage from inside Redwood Materials facilities, begins about halfway through the video. (The first part of the video, about fault activity in the Walker Lane deformation zone that roughly parallels the San Andreas fault system, is interesting as well.)

And then … tah dah…Redwood Materials will actually recycle YOUR e-waste. There is a statement on their website, https://www.redwoodmaterials.com/recyclewithus :  Have lithium ion batteries or e-waste? We’ll recycle your phones, laptops, tablets, power tools and any other device with a lithium-ion battery. Devices may be dropped off or sent to: (their address in Carson City, Nevada). (Californians, especially, might want to take advantage of this offer?)

There is an expression that has been around for several years: If it can’t be grown, then it has to be mined. From our cars and phones to our lightbulbs and toothpaste, the mining industry plays a major role in modern economies. And demand for many raw materials, including lithium, is continuing to grow dramatically.

Domestic lithium production not only provides local jobs, it also limits mining operations in countries where worker and environmental safeguards may be less stringent or even nonexistent. Secondary industrial processes to recover lithium, such as at geothermal power plants, and recycling this metal from dead batteries to make new ones, can eventually make a big dent in the need to construct new mines. When mines are necessary, locations and safety procedures must be carefully considered, and regulatory oversight and enforcement are essential. These are daunting challenges. Nonetheless, responsible mining companies, together with effective regulatory agencies, will go a long way to help these practices succeed and limit damages associated with extracting more metal ores from our planet. 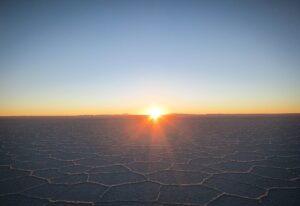 Feature image photo of hexagons in a salt lake in the Atacama Desert by TravelCoffeeBook from Pixabay https://pixabay.com/photos/salt-lake-atacama-desert-hexagons-594606/

Photo of e-waste by John Cameron on Unsplash.   https://unsplash.com/photos/7zocFMzvbpc