Ancient Andean Ritual Drugs – and Beyond

Ancient Andean Ritual Drugs – and Beyond

The Inca, Tiwanaku, Moche, Chavín, and many other indigenous Andean cultures used a variety of plant-based drugs – including hallucinogens and narcotics — in their religious rituals. When the ancient people ingested what they considered to be sacred plants, access to a separate realm – a supernatural world – could be reliably achieved. The altered states of consciousness conferred by the plants were considered “instructive”, and carefully controlled by priests because of a fear of physical effects of the drugs and religious consequences of the spirit journeys.

An impressive number of psychoactive plants, estimated at somewhere between 80 to 100 different species, could be used by ancient people in the New World. In comparison, no more than 8 or 10 wild species existed in the Old World, where populations began sharing the milder euphoric properties of alcohol early in history. In the New World, only a small number of ritual specialists utilized the intense properties of hallucinogens, shaping religious views that were strongly rooted in other worlds. Throughout the New World, drugs were taken in formal settings; few, if any, were used recreationally by indigenous people. 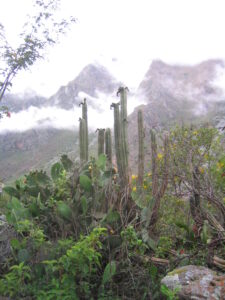 A type of cactus that grows at high altitudes in the Andes Mountains contains the hallucinogenic compound mescaline. Known as the San Pedro cactus (Echinopsis pachanoi), this plant has been depicted for thousands of years on ancient Andean pottery, textiles, and stone sculptures. San Pedro cactus is depicted as a staff being held by the part human-part-snarling-beast carvings of the Chavín culture, dating back 3,000 years (photo below). From the association of San Pedro cactus with jaguars and other mythical feline-type creatures in the temples of Chavín de Huantar, archaeologists suggest that the Chavín shamans may have believed they were transformed into these creatures when they used hallucinogens. 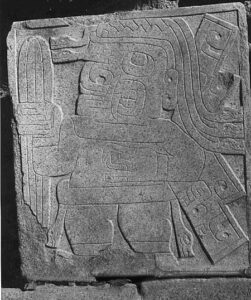 The Colonial Spanish attempted to suppress the use of the San Pedro cactus in their zeal to convert their subjects to Catholicism. They failed in this effort, but perhaps it was some consolation that they successfully assigned a Christian name to the plant. In what was likely recognition of the plant’s powers, the cactus was named after the apostle San Pedro, or Saint Peter, who is known as the guardian of the gates to worlds that are unseen. Today in northern Peru, San Pedro cactus continues to be used by traditional healers in purification rituals to diagnose and cure “magical” ailments, somewhat comparable to psychosomatic disorders in Western medicine.

Another hallucinogenic plant drug used by the ancient Andeans comes from pods of a  tree known as Vilca or Wilca, from the Quechua word meaning “sacred” (genus Anadenanthera). The psychoactive substance occurs in seeds embedded in pods, which were pulverized and used as snuff, smoked, or ingested. Evidence of use from the time of the Chavín culture through the Incas is found in the form of wood and bone inhaling tubes, snuff trays, small spoons, pipes, and elaborately carved mortars and pestles. (Imagine the surprise of the early archaeologists who first stumbled across millenia-old drug paraphernalia!) The Spanish Jesuits waged a sustained attack to suppress the use of Vilca by equating it with devil worship. Most public knowledge of this special plant was lost before the Colonial period ended, however, some indigenous South Americans reportedly still use it today.

The steep slopes and thick forests midway between the high Andes and the tropical lowlands of the Amazon Basin are where coca (genus Erythroxylum) originated and flourishes. We all know that coca leaves contain a small amount of the stimulant cocaine, but what’s fascinating is that the ancient Andeans discovered that at least 10,000 years ago. The Andeans learned that when coca leaves are chewed together with calcium carbonate such as lime, the alkaloid cocaine is released. They could make their chewing-lime by burning seashells or certain plants to produce an ash that contains calcium carbonate. It’s not clear how or why the early Andeans learned to chew roasted seashells and raw leaves, but clearly they were onto something (and without any of the high tech chemistry that narcos use today).

Coca is commonly ingested by chewing and forming a small ball of leaves in the mouth that is held between the gum and the cheek. We know this is how it was used thousands of years ago because a characteristic cheek bulge on one side of the mouth can be seen in many ancient Andean paintings and on sculptures. Traces of both leaves and calcium carbonate have been found in ancient burials, including in the mouths of mummies, either as particles lodged in the teeth or as a lump in one cheek. In elite burials, small vessels of coca and lime were left with other grave goods to accompany the dead into the afterlife.

Especially useful for suppressing hunger and fatigue (handy when using stone tools to shape multi-ton stone blocks, and then dragging them for miles), coca also can allegedly ease a wide array of problems including headaches, constipation, altitude sickness, asthma, and can heal open wounds. In traditional uses, coca leaves are not addictive.

Coca had important roles in religious practices and was used as an offering to deities and venerated ancestors in many ancient Andean cultures. It was commonly used as gifts in social exchanges and became an essential component of public festivals. After the Spanish conquest of the Incas, the Church forbade the use of coca in religious rituals, but at the same time recognized the value of this stimulant for workers. Coca plantations became an important industry and production of coca leaf actually increased under Spanish rule, as it was used to pay the native Andeans forced to work in the dreadful conditions of silver and mercury mines.

It is legal in Peru and a few other Andean countries today to grow, sell and possess coca for traditional uses. Following indigenous cultural practices, millions of people chew the leaves or drink coca tea. Coca is as central to Andean culture as coffee or tea are for many European and Asian cultures. International drug control treaties, however, lump coca leaves together with heroin and cocaine, although the latter is technically a “concentrate of coca leaf” and logically should be distinguished in this way.  Efforts to make changes in international laws by the Andean countries have been ongoing for decades, so far unsuccessfully.

“White Silver” – the Dark Side of Coca

A chemical process using solvents was developed around 1860 to extract cocaine from coca leaves, and cocaine subsequently was considered a wonder drug for medicinal use. It was carried in drug stores, added to various medicines (photo below), and even became a key ingredient in the beverage Coca-Cola in the late 1800s (cocaine-free leaves of coca have reportedly been used since 1906). When the recreational use and abuse of cocaine grew over time, the addictive nature of the drug as well as other adverse health effects became clear, and by the early 20th century cocaine was illegal in many countries. 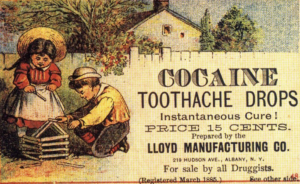 Tooth drops to cheer up children, circa 1885

Coca trees grow wild and can be easily cultivated in the warm temperatures of the mid-elevation mountains of the northern Andes. Poverty drives many Andean farmers to grow coca leaf for cocaine production, as coca can bring in several times the income and has reliable markets, as compared to coffee, avocados, or other crops. The vast web of this clandestine and violent industry involves hundreds of thousands of people, from farmers to smugglers. Tens of billions of dollars annually are produced in revenues, making it among the most valuable single commodity chains in world history.

There is a long and tragic history in the Andes of rich natural resources being exploited by outsiders. Beginning some 500 years ago, Andean metals production brought enormous wealth to the Spanish elite (much of it used to fund wars with their European neighbors). The silver mines at Potosi and mercury mines at Huancavelica, known as “The Mines of Death,” fueled the Spanish political economy for more than a century. In turn, the indigenous Andeans endured horrific treatment working in the mines and environmental devastation of their lands. When the silver resources were exhausted, copper and tin were the next metals to be mined and shipped away. And now, the “white silver” cocaine has been added to this export list. Blessed with an abundance of valuable assets, the Andeans have also been cursed with the foreign attention that these riches bring.

What resources will South America export to the world one hundred years from now? Perhaps with more expansive political motivations, future generations will be able to improve the lives of all Andean citizens by sharing more of the wealth found in their incredible landscape.

History repeats itself. That’s one of the things wrong with history. — Clarence Darrow

Echinopsis pachanoi, San Pedro Cactus, the tall cactus in the mid-foreground, in Peru; several fruits with shrivelled flowers can be seen.  By https://www.flickr.com/photos/micahmacallen/ – https://en.wikipedia.org/wiki/Echinopsis_pachanoi#/media/File:Echinopsis-pachanoi-peru.jpg

Stone carving stone showing a procession of Jaguars, one of them bearing, in the right hand, the San Pedro cactus (Echinopsis pachanoi), Chavin de Huantar.     https://commons.wikimedia.org/wiki/File:Chavin-cactus-stone.jpg