How did the ancient Andeans and Egyptians move the massive stone blocks used to build their monumental architecture? With an abundance of human muscle power but only simple hand tools, they needed to be creative. Floating blocks on boats across lakes and along river channels was a possible transport method—but how did the ancient ones do this? It is an intriguing question.

The Giza pyramid complex near Cairo is truly one of the wonders of the ancient world; it was placed on the UNESCO World Heritage List in 1979 (see my recent blog post; link is below). The ancient Egyptians built the three major pyramids between about 2600 and 2500 BCE, during the time historians recognize as the Old Kingdom. The Great Pyramid of Giza, the largest of the three, commemorates the reign of Pharaoh Khufu (Cheops).

The Great Pyramid initially soared to a height of 481 feet (146.6 m). To construct it, an estimated 2.3 million blocks had to be quarried and moved into place. Workers extracted enormous amounts of limestone from several quarries along both sides of the Nile River Valley to the south. Transporting the blocks clearly required monumental efforts, since each block weighed an average of about two tons (4,000 lbs./1,814 kg). Although the Egyptians needed to pull these blocks on sleds for short distances, floating the blocks to the construction sites on rafts or boats was another possibility–IF enough water was available near the construction sites. Today, the Western Desert surrounds the Giza Plateau, and the Nile River is about 4 miles (7 km) distant. 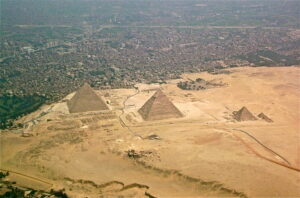 Giza pyramid complex; the Great Pyramid of Khufu is on the left (Wikipedia)

As it turns out, researchers have recently uncovered several lines of evidence showing that approximately 4,500 years ago, a former channel of the Nile River extended close to the pyramid construction sites. Further, for many years, scholars had theorized that the ancient Egyptians had excavated a network of artificial basins to allow rock cargo to be deposited at the edge of the plateau. Direct evidence was minimal. Now, a series of discoveries support this understanding.

First, the stage had to be set to allow a large population to live and prosper in the region, including the thousands of workers essential for building the pyramids. Reconstructions of the environmental history of the Nile River delta extend back about 8,000 years, when water covered the region. As the water retreated and the land dried out, scientists identified pollen spores in Nile sediments showing changes in the regional vegetation. These include a marked increase in spores from types of fungus that are found on animal dung around 7,000 to 6,600 years ago. Then, there is the abrupt appearance of domesticated cereal grass pollen, including from abundant barley, nurtured by the seasonal floods of the Nile River. Animal grazing and crop production became part of the environmental record for the next couple of thousand years.

Then, from drill cores and excavations made for a modern wastewater project, researchers recognized an ancient branch of the Nile River, known as the Khufu Branch, that extended towards the Giza Plateau. Scientists also found evidence of this waterway from sediment cores that include pollen from plants like papyrus and cattails, showing a wet and marsh-like environment. For several centuries, it appears that boats could navigate the channels of the Khufu Branch.

Archaeologists discovered another important key to pyramid construction about 100 miles (160 km) to the southeast of Giza, near an ancient harbor on the Red Sea called Wadi el-Jarf. There, the Egyptians had carved storage galleries into limestone foothills to provide areas to stockpile harbor supplies. Among the items recently found were hundreds of fragments of papyri. Some of these were inked with records that were the logbooks of a group of some 40 workers who were crew on a boat during the reign of Pharaoh Khufu. They record the transport of limestone blocks along the Nile River and then through a series of water-filled basins, using terms such as “Khufu’s Lake”. At the base of the pyramids, workers unloaded the rock to cover the outer layer of the Great Pyramid, then, the boat crew would head back to a quarry for another load of rock. 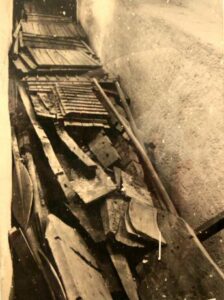 The Khufu ship possibly used as a funerary boat to carry Pharaoh Khufu’s mummified body; discovered sealed in a pit at the base of the Great Pyramid in 1954. The ancient Egyptians built this ship with a flat bottom composed of planks lashed to a frame with a type of grass. (Wikipedia)

These papyri records are consistent with the results of an archaeological survey that took place a few decades earlier. Excavations had detected the outlines of one of possibly several artificial basins, which measured around 0.25 mile by 0.33 mile (0.4 by 0.5 km). Cores taken in this basin show it was likely carefully dredged to a depth of between 26 and 33 feet (8 and 10 m), allowing clearance for heavily laden boats. The correspondence between the papyri texts and the archaeological excavations is remarkable.

Without the Khufu Branch of the Nile, construction of the pyramids would most likely have been impossible. And water didn’t flow in this channel for long. The regional climate became increasingly arid. A major drought occurred around 4,200 years ago, leading to an abrupt decrease in the Nile River flow. The Khufu channel flow and the pyramid construction that depended on it ended. Not long after, the Old Kingdom collapsed.

The Tiwanaku culture in the high Andes Mountains also used boats to move some of the stone blocks for their monumental constructions. This culture flourished from about 500 to 1000 CE, based in their principal city south of Lake Titicaca, now in modern Bolivia (more about this culture in a previous blog post; link is below). Researchers have traced the reddish sandstone used in Tiwanaku monuments to a quarry roughly 10 miles (16 km) south of the city, where workers took advantage of naturally occurring joints in the sandstone to simplify carving out large blocks.

The volcanic rock andesite became an important construction material when the power and influence of the Tiwanaku culture was expanding. Identifying the location of the andesite quarries mystified researchers for many decades, as there are many outcrops of this volcanic rock in the region. One valuable clue, however, was available: abandoned large and roughly trimmed rectangular andesite blocks to the north of the Tiwanaku site on the shoreline of Lake Wiñaymarka, the southern part of Lake Titicaca. More “sofa-sized” blocks are lying across the lake in the foothills of a prominent volcanic peak named Mount Khapia.

Chemical analysis of samples of architectural stones and carved monoliths at Tiwanaku show that the slopes of Mount Khapia were the source of the andesite used for these constructions. As the puzzle pieces fell into place, it became clear that laborers quarried and roughly shaped the andesite blocks, loaded them onto rafts made from locally harvested totora reeds, and transported the blocks about 14 miles (22 km) across the lake. A town named Iwawe, located where the Tiwanaku River enters Lake Titicaca, was the port for the andesite blocks. Workers then hauled the blocks overland, using thick ropes and human muscle power, for about 14 miles (22 km) more towards Tiwanaku. Clearly, the choice of andesite as a construction material involved many challenges.

What do we know about the boat designs that the ancient Egyptians and Andeans used to carry these heavy blocks? Not much! Plant materials used for boats decompose rapidly, including the cedar and pine fragments found in storage galleries near Wadi el-Jarf, and the totora reeds the Tiwanaku people used. The Khufu ship (photo above), sealed into a rock vault for over 4,000 years, provides hints of how the Egyptians might have built the boats or barges used to move the rock for the pyramids. On Lake Titicaca today, modern boats of totora reeds used by the Uros people are probably similar to those used by the ancient Tiwanaku people (photo below).

For the ancient Egyptians and Andeans, moving multi-ton blocks on wood or reed rafts was clearly an ambitious undertaking that required substantial engineering skill. Impressive! 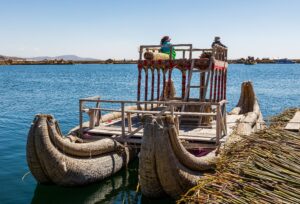 Photo of Khufu ship when discovered in 1954. https://commons.wikimedia.org/wiki/File:Barque_solaire-Decouverte2.jpg

Photo of reed boat used by the Uros people who live on floating islands in Lake Titicaca, by Diego Delso, 2015  https://commons.wikimedia.org/wiki/File:Islas_flotantes_de_los_Uros,_Lago_Titicaca,_Per%C3%BA,_2015-08-01,_DD_40.JPG