Evidence indicating where ancient people collected the valuable pigment red ochre thousands of years ago may seem like an unlikely combination with underwater archaeology – but that isn’t the case. Sea levels have been substantially lower than at present for most of human existence, so we know that many traces of our history are hidden beneath water. Gaining access to this information has been of increasing interest for several decades. It will become even more important as sea level continues to rise.

Underwater archaeology had a start in shipwreck salvaging, although since that was often a thinly disguised foil for vandalism and looting, the reputation of serious underwater work was questioned for a time. Fortunately, that has changed as numerous universities and educational societies now teach proper conservation techniques. There is even an international legal framework to protect cultural resources under the UNESCO Convention on the Protection of the Underwater Cultural Heritage, adopted in 2001. 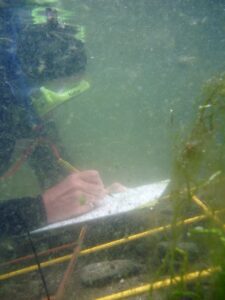 A fascinating body of archaeological evidence has been discovered underwater, and there is extensive experience in surveying and collecting artifacts. Underwater sites are inevitably hazardous and difficult to access, which results in time consuming excavation processes requiring high human resources and specialized equipment.  New technologies for underwater surveys with robotics are being used to probe submerged landscapes, including deploying Remotely Operated Vehicles (ROVs) and Autonomous Underwater Vehicles (AUV) that can be fitted with a range of sensors and used to map large areas.

A Hidden Ochre Mine

New archaeological research just published in July 2020 provides a fascinating story about ancient mines in Mexico where iron oxide was collected to make red ochre. I also describe ochre mines in my recent Ancient Minerals and Ancient Mines posts, so this new study is of special interest to me. (And — I greatly appreciate being alerted to the new research by two of my blog readers.) Ochre has been a valuable resource used by humans worldwide since early in prehistory. Iron oxide minerals are mixed with clay, sand, or other materials and used in rock paintings, on painted objects, for body painting and in mortuary practices.

The new research involves accidental findings made by scuba divers working on an underwater cave exploration project for the Aquifer System Research Center of Quintana Roo (CINDAQ) on the eastern side of the Yucatan peninsula in the Mexican state of Quintana Roo. The limestone platform that underlies this region is honeycombed with caves, and thousands of natural sinkholes, known as cenotes, that form when the dissolving rock collapses. Along the Caribbean coast of the Yucatan Peninsula cenotes are frequently connected to extensive underwater cave systems (karst topography). Typically, these underwater caves have a layer of freshwater underlain by higher density saltwater that is infiltrating from the adjacent sea. 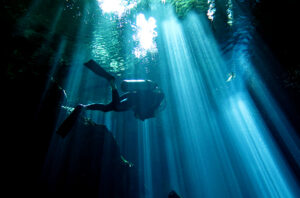 The divers had been exploring and mapping the underwater Sagitario cave system when deep into the dark recesses they came across signs of human disturbance. Most compelling were stalactites and stalagmites broken off to allow movement into a narrow opening in a section of the cave, and navigational markers formed by cave rocks piled into cairns, with broken stalactites used to indicate directions to the ochre pits. Cairns are a smoking gun – well, sort of; they are unmistakable evidence of humans. Also found were tools used for digging, conveniently sourced from stalactites and stalagmites, and excavated pits where the ochre was extracted.

In the pitch black darkness of the cave, fire would have been an essential tool and there is abundant evidence of the use of torches and small hearths. Sections of the cave ceiling are still blackened by soot from these fires. Fragments of charcoal that could be identified were all produced from exceptionally resinous trees that are still found in the region. These are referred to locally as “torchwood” and “candlewood”, providing compelling evidence of the value of this wood for providing light.

From the carbon left behind in the long-ago fires, researchers have determined the cave was inhabited between about 12,000 and 10,000 years ago, thousands of years before the Olmec and Maya cultures emerged. The cave was submerged sometime beginning around 8,000 years ago, but geologic evidence indicates it had been abandoned many years before being filled with water.

Looking Back in Time

Indigenous Americans descended from Siberian ancestors who spread southward into the Americas beginning at least 15,000 and possibly as early as 20,000 or more years ago. The climate was much colder then, and continental ice sheets thousands of feet thick blanketed much of North America. Because so much water was trapped in ice, sea levels were much lower. Travel through vast ice fields would have been extremely difficult, and multiple lines of evidence indicate that the earliest explorers moved south along the Pacific Coast in small boats. This marine route is known as the Kelp Highway, in recognition of the widely spread and productive kelp fields, which together with abundant fish, shellfish, and marine mammals, provided the marine hunter-gatherers with a nutritious diet. 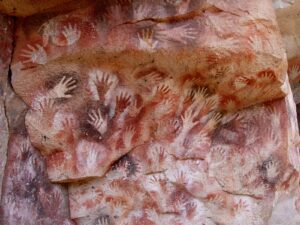 The Ice Ages were coming to an end when the ancient miners were collecting ochre in the caves of Quintana Roo,  and the shoreline was estimated to have been about one half mile farther offshore than it is today. The coastline along what is now San Francisco Bay in California was 15 to 20 miles farther to the west, beyond the Farallon Islands. Any settlement sites left by the earliest inhabitants of long stretches of coastlines in the America are now deep beneath ocean waves. If the puzzle pieces of early settlements are to be found, it will be by using underwater archaeology.

The remains of at least 10 individuals who lived around 12,000 to 10,000 years ago have been found in the caves of Quintana Roo, and most are believed to have entered dry caves. Archaeologists were uncertain why some of these people were wandering around underground before they died. Now, the picture is becoming clearer. The ochre deep inside the Sagitario cave system is of very high iron oxide purity, with a vibrant red color and fine-grained pigment particles. Iron-enriched soils on the surface above would have been a much poorer choice for ochre pigment, so the great efforts to collect the minerals from underground were well warranted. At least some of those who died in the dark expanses of the cave may have been prospecting for valuable ochre. It was a dangerous occupation.

Photo of diving in a cenote by Gustavo Gerdel, 2015; https://en.wikipedia.org/wiki/Cenote#/media/File:Cenote_por_Gustavo_Gerdel.jpg

Photo of hands dating between 13,000 and 9,000 years BP at the Cuevas de las Manos upon Río Pinturas, near the town of Perito Moreno in Santa Cruz Province, Argentina. 2005. https://commons.wikimedia.org/wiki/User:Marianocecowskihttps:/ /en.wikipedia.org/wiki/Cave_painting#/media/File:SantaCruz-CuevaManos-P2210651b.jpg