Five hundred years ago the Inca Empire stretched across the Andes Mountains of South America, encompassing arid coastal deserts, snow-covered mountains, and humid rainforests. Within a narrow band of land, these different and distinctive ecological zones are arranged in a series of vertically stacked tiers packed tightly together in a staircase shape. Landforms and climate—the geography of the Central Andes region—create this vast and unique environmental diversity. It is not duplicated anywhere else on Earth.

The Incas and their ancestors took advantage of the natural bounty of their lands, with population centers developing in the areas of the highest biodiversity. A wide variety of endemic plants and cultivated crop species, some domesticated as long ago as 10,000 years ago, formed the foundation of the ancient Andean cultures. Over generations, vast regions of inhospitable terrain were arduously transformed into arable farmland. From the high mountains where quinoa and potatoes can be grown, to the maize, peppers, beans, tomatoes, avocado, coca, guava and other fruit and vegetable crops in the mid-elevations, to the bounty from the fish and marine mammals of the Pacific Ocean, the Incas could maintain a nutritious diet and build surpluses. 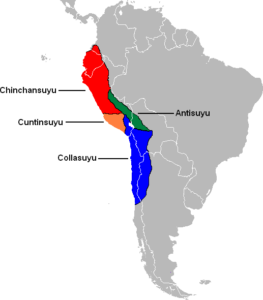 The four parts of Tawantinsuyu, the Inca Empire

In my research about the Inca Empire, one element has repeatedly captured my attention. Since the empire fell in the 16th century, there is something that no subsequent government ruling over this territory has achieved as successfuly as the Incas. And a similar pattern has been followed in the USA.

The Inca Empire tied together more than 1,200,000 square miles of an extremely diverse geographic region. Hundreds of different ethnic groups were united under Inca rule, with populations that spoke over 160 distinct languages and dialects. At the height of the empire, an estimated 10 million people, and possibly millions more, lived under Inca rule. The genius of the Incas was in their ability to unify these diverse and disbursed ethnic groups – a feat never before duplicated by ancient cultures in the Americas, nor in any other mountainous terrain on Earth.

The Incas were extremely successful in many of their ambitious endeavors. During their short reign — the height of the empire lasted from only about 1476 to 1532 — many impressive monumental constructions were built. These can be seen at archaeological sites throughout the Central Andes today. Machu Picchu, the temples and palaces in the Cusco region of Peru, the extensive and elaborate Inca Road system, and unique sites like the sunken circular terraces at Moray, are familiar to many people. (I’ve written posts with descriptions of many of these monuments – search for “Inca” in the blog section of my website, here:  https://roseannechambers.com/blog/ .) 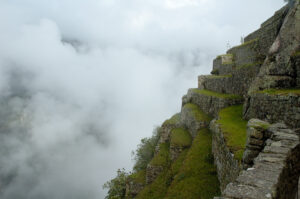 In addition to the monumental constructions, finely crafted gold and silver art objects, ceramics, and exquisite textiles, a great accomplishment of the Incas was their successful food production.

In the Pacific Ocean offshore from the Central Andes, the Humboldt Current generates one of the most productive ecosystems found on Earth. This cold water current contains a rich soup of nitrogen, phosphorous, potassium, and other elements that are utilized by phytoplankton, the tiny organisms that form a broad base for a prolific food chain ranging from microorganisms to birds and large sea mammals. The nearshore bounty includes vast numbers of anchovies and sardines that can be netted by the thousands, plus many types of larger fish. Another important resource was the thick accumulations of guano left behind by the huge number of seabirds feasting on fish, and utilized by the ancient Andeans for fertilizer for their crops for millennia. The enormous abundance available from the highly productive marine ecosystem allowed ancient Andean societies, including the Incas, to prosper. Today, the Humboldt Current accounts for as much as roughly 20% of the total worldwide marine fish catch.

A Staircase of Distinctive Ecological Niches

The diverse Andean topography of geographically distinctive, vertically stacked zones presents important opportunities. By recognizing the unique qualities of these tiers and by developing crops that were optimal for specific local conditions, the ancient Andeans became highly successful at producing food. Terraces built for planting crops on steep slopes, and irrigation canals to nurture the plants, had been used in the Andes by earlier cultures, but the Incas greatly increased the extent of these systems whenever new territory came under their control. Enormous fields of maize, especially, were planted, as this is the key ingredient in the fermented drink chicha that had an important role in the feasting practices of the Incas. 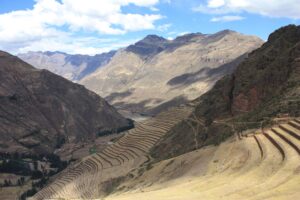 Challenges presented by the environment, especially in the form of erratic weather, are a constant in the Andes. In such conditions, productivity at a specific elevation zone can fluctuate widely from year to year. Gaining access to the resources of multiple ecological zones and storing food for lean times became important survival mechanisms. Families or communities would take advantage of the growing conditions in several sectors. In the simplest form, extended families would exploit multiple ecological niches along a vertical transect, herding llamas and alpacas in high pasturelands and growing tubers, grains and other vegetables at successively lower elevations.

Early in history ancient Andean societies collected and stored food for the good of the community.  In a region with inconsistent weather, this allows natural variations in productivity to be smoothed out – important in the highlands where only one good crop harvest every three to five years was possible.

The storehouses of the Inca Empire are legendary, as thousands of these were scattered across the empire. In these storehouse an emphasis was placed on foods such as maize, quinoa, and other grains that can be stored for relatively long time periods. Meat, fish and many types of plant foods, especially potatoes, were dehydrated to remove water and then stored for later use. The frequent feasts the Inca authorities held for local populations required large quantities of stored food. Also, it was impractical to move food and supplies too far from where they originated in this mountainous region where goods could be transported only on the backs of humans and llamas. 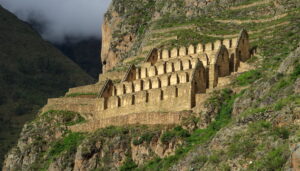 Storehouses were built conspicuously on the valley slopes above Ollantaytambo and throughout the Inca realm. The high visibility of the storehouses may have been intended to reassure the local populations of the power of the empire. Whenever a community could not provide enough food for its members due to adverse weather or other environmental conditions, food would be distributed from a storehouse, and then the supplies would be repaid once conditions improved.

Wealth in the Americas

The Inca Empire was an authoritarian monarchy and the Incan nobility held vast control over their subjects. Certainly, not everyone in the communities under Inca rule was happy with this arrangement. Nonetheless, here is the important point of this post: the Incas are widely credited with successfully providing adequate food, water and shelter for every person in their empire. Every person, in a population numbering 10 million or more.

This feat was not accomplished in South America under the Spanish colonial rule, nor has it happened under the current governments of countries — including Peru, Bolivia and Ecuador – that were once a part of the Inca Empire. Even more glaringly – this hasn’t been accomplished in the USA, a country with tremendous natural wealth, as well as the vast majority of billionaires on the planet.

Just for comparison, I checked out indicators of the current standard of living in different countries of the world, using data from the International Monetary Fund (189 countries ranked) and the World Bank (185 countries ranked) – these data show the USA as #7 and 8, respectively; Peru as #103 and #109; Ecuador as #107 and #106; and Bolivia as #117 and #117.

In towns and cities throughout the USA, including close to my home in the San Francisco Bay Area, homelessness and food insecurity are all around. It is apparent that this trend will continue, and sadly become worse, before it can change direction. Our “advanced” 21st century societies need to find — and implement — a better path forward. History shows us that the situation can be improved.

Map of the four parts of the Inca Empire: https://commons.wikimedia.org/wiki/File:Inca_Empire_South_America.png

Photo of terraces near Pisac, Peru: Image by Bret Fischer from Pixabay: https://pixabay.com/photos/pisac-peru-andes-mountains-4047008/

Photo of storehouses near Ollantaytambo: https://en.wikipedia.org/wiki/Ollantaytambo#/media/File:Ollantaytambo_granaries_Stevage.jpg

List of the countries of the world by gross domestic product (at purchasing power parity, or PPP) per capita, i.e., the PPP value of all final goods and services produced within a country in a given year, divided by the average (or mid-year) population for the same year.   https://en.wikipedia.org/wiki/List_of_countries_by_GDP_(PPP)_per_capita