What do lava flows in Hawaii, eucalyptus trees in the Andes Mountains of Peru, beehive-shaped ovens in Nevada, and a dog’s ticket to a veterinarian office for an emergency visit all have in common? I can explain.

The title of this post provides the answer to the connection question: charcoal. While charcoal may seem to be a rather dark and dull topic, this material also happens to be an extremely valuable resource. The list of uses for the black carbon residue, typically produced when plant and animal materials are subjected to high heat, is quite long and interesting. I could go on and on about this subject, but I’ll limit this post (more or less) to only those associations described above. And I will definitely get to the charcoal/chocolate/dog connection, below!

Charcoal under the microscope (Alexander Klepnev)

Among the most valuable uses for charcoal — at least for those of us interested in geology and archaeology — is for radiocarbon dating. During my fieldwork years investigating recently active faults, I spent many hours searching for charcoal fragments preserved in subsurface sediments. The precious chunks were carefully collected, wrapped in aluminum foil, and sent off to a dating lab. Months later, we would be rewarded with carbon-14 dates to bracket the ages of surface-displacing earthquakes.

The radiocarbon dating method involves measuring the concentration of carbon-14 that remains after the death of an organism. In a closed system, once a plant or animal dies, carbon-14 is no longer incorporated into tissue and begins radioactive decay. The approximate time of the death can be calculated by measuring the amount of this element that remains. Around 50,000 years old is the age limit for use of the method, although this range is being expanded by new techniques.

The importance of charcoal in reconstructing the history of volcanic eruptions in Hawaii is described in a recent article published by the USGS Hawaiian Volcano Observatory, here: https://www.usgs.gov/center-news/volcano-watch-charcoal-a-game-changer-understanding-processes-young-volcanic-terraines .  The article also has a nice explanation of how radiocarbon dating works, so check it out.

During my first visit to the Andes Mountains, in the area around Cusco, Peru, I was dismayed to see the hillsides covered with eucalyptus trees native to Australia. As a life-long resident of the San Francisco Bay Area, I’ve been surrounded by the eucalyptus introduced into California, but I certainly didn’t expect to see these alien trees at elevations of 10,000 feet in the Andes. Turns out, agrarian reforms in the 1960s and early 1970s encouraged large-scale eucalyptus tree forestry in rural areas of Peru. Promoted as a source of fuel (including charcoal), building materials, and even a commodity to export to urban markets, eucalyptus now plays an important role in Peruvian farming economies. Much of the southern Peruvian Andes – home to the Incas and their ancestors for thousands of years – was completely deforested centuries ago (primarily after the Spanish conquest in the 16th century, but that’s another story…) so in the face of fuel wood and timber shortages, modern Andeans have enthusiastically accepted these rapidly growing and adaptable trees.

For thousands of years, charcoal was an important resource in the Andes and elsewhere for smelting silver and other metallic ores. On a recent trip to eastern Nevada I learned more about this historic use of charcoal. (The trip was a continuation of explorations along Highway 50; some of the geologic wonders of the western section of this “Loneliest Road in America” are described in my post here: https://roseannechambers.com/nevada-tufa-tuff-and-scarps/ ). About 20 miles south of the town of Ely there are six beehive-shaped historic ovens at the Ward Charcoal Ovens State Historic Park. Built by Italian-Swiss masons in the mid-1870s, they began operating in 1876, fueling the silver smelters of the Ward Mining District where silver ore was discovered in 1872. 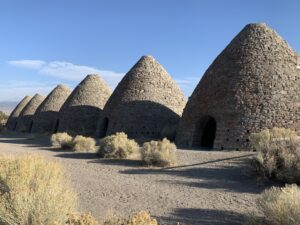 The parabolic beehive shapes of the ovens are efficient at reflecting heat back into the center of the ovens. The structures are 30 feet high, 27 feet in diameter at the base, and have walls that are about 20 inches thick. To make charcoal, huge amounts of the local pinyon pine and juniper were stacked in each oven, as each one held around 35 cords of wood, or the amount that could be stripped from 5 to 6 acres of land. Once the oven was loaded, the wood was ignited and a metal door cemented shut. The rate of combustion controls the charcoaling process, with the color of the smoke indicating progress. Vent openings near the base of the ovens could be used to adjust air drafts to produce the optimum amount of charcoal. About 10 to 12 days was required to complete the charcoaling process.

I know next to nothing about oven construction, nonetheless, it seems to me that the ideal construction material would be volcanic rock born of fire. And that was indeed the case for the Ward charcoal ovens. The rock used is a welded tuff, composed of ash that was ejected during a Tertiary (Oligocene) volcanic eruption. Known as a quartz latite welded tuff, it is composed predominantly of alkali feldspar and plagioclase, along with quartz. A prominent rock outcrop near the ovens shows the columnar jointing of this welded tuff (a photo of columnar jointing in mountains to the west is shown in my Nevada Tufa, Tuff and Scarps post referred to above). Although I didn’t have a chance to look more closely at this outcrop, I suspect that the quarry for the oven material provided “pre-shaped” rock that could be excavated relatively easily. Clearly, the suitability of the conveniently available rock, together with the skill of the European masons, contributed to the beauty and utility of the Ward ovens. 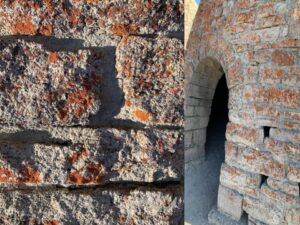 After only three years of operation, and not too surprisingly, a timber shortage developed for charcoal production in the Ward Mining District, plus the silver ore deposits were depleted, and the miners moved on into richer territories. The ovens gained new uses by sheltering occasional stockman and prospectors, as well as allegedly serving as a convenient hideout for stagecoach bandits. (The latter now lost in Nevada’s dust of history, along with the charcoal industry….). The State Park was created in 1994. If you are visiting the Ely area, making the trek out the long gravel-covered access road is well worth the trip. 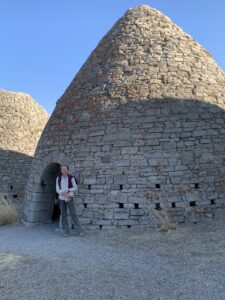 Activated charcoal is used for medicinal purposes to treat overdoses. The exceedingly high temperatures used in the manufacture of this product frees up bonding sites for molecules, making it exceptionally absorbent. When consumed, activated charcoal binds to toxins in the stomach and prevents them from being absorbed. Since the body is unable to break down charcoal, the bound toxins are eventually excreted.

This is where a dog I know and love — my grand-dog Scout — comes in. Apparently around the time I was admiring the Ward Charcoal Ovens, Scout climbed up onto a swiveling office chair, and then onto a desk, so that she could gobble down a fairly large 70% dark chocolate bar. Not good. Chocolate contains an alkaloid called theobromine, closely related to caffeine, which is fine for humans but metabolized very slowly in dogs and can potentially damage their hearts, central nervous systems, and kidneys. So, within a few hours of this sweet snack, Scout was rushed to the vet and forced to consume an activated charcoal cocktail. Happily, she is now back to her normal doggie-self. The importance of charcoal confirmed once more! 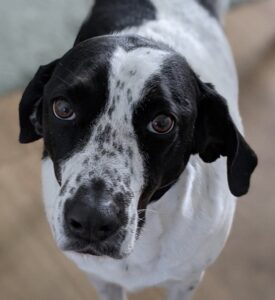 My photos of Ward Charcoal Ovens State Historic Park in 2020