Colorful rocks extend across wide swaths of the Southwestern United States. Showcased in sedimentary rock formations in Zion, Arches, Capitol Reef, Canyonlands, and other national and state parks in southern Utah, a spectacular bedrock “palette” of rich shades of pink and red, purple and creamy white, and yellow and green tones is in view.

I’m enthralled by these rocks (you probably know this if you read my blog posts)! After recently visiting them again, I wanted to know more about the colorful extravaganza. It is an interesting story. 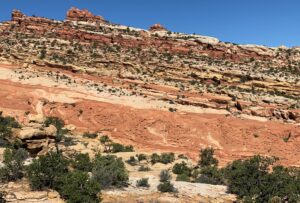 The colorful hues of Red Rock country reflect both the amount of oxygen present as the rocks formed and tiny amounts of various forms of iron. The reddish stains are from oxidized – essentially rusted — iron that formed in the presence of oxygen. Greens and grays represent reduced, or oxygen-poor, conditions where little or no iron was oxidized. The conditions that created the rock colors we see today are a result of the depositional environments where the rocks began to form. Ancient desert dunes that were virtually devoid of life versus plant-filled swamps where dinosaurs roamed and small mammals hid in the shadowy undergrowth, have left distinctly different records in sandstones and shales.

Only a small amount of iron oxides, in the range of less than 5%, is needed to color rocks red. Iron is a common metal on our planet and it is released from many minerals when chemical and biological weathering processes break down rocks. Resistant-to-weathering quartz sand grains can be coated with a film of iron, or iron is incorporated into the cement that binds the sand into rock. When sediments are buried deeply underground for tens of millions of years, groundwater can move through them and carry off the iron. Under the proper conditions, the groundwater redeposits the iron as fillings in fractures, along cross beds, in irregular bodies, and Moqui marbles (more about those in my post: https://roseannechambers.com/curious-concretions-on-the-colorado-plateau/ ) 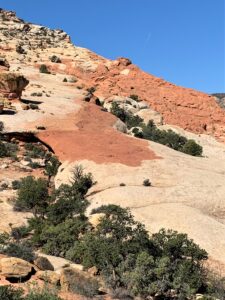 The most colorful rocks are the former dune sands from a stark, empty landscape. Color accentuates ancient cross beds created by sand dunes, where layers of quartz sand are inclined as a result of the fluid flow of wind. Blown into accumulations on the windward side of a dune, as the dune grows, some sand falls over the leading edge, or leeward side, to form the asymmetrical dune shapes. The weight of increasing amounts of sand piling upward eventually consolidates the dunes into sandstone rock formations. 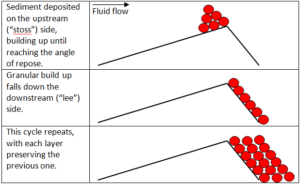 The widely distributed Navajo Sandstone, which formed between about 200 and 195 million years ago, has award-winning colorful cross-beds. A vast sandstone sea eventually developed from the shifting dunes of what was likely the largest desert that ever existed on this planet – ancient or modern. (The Navajo Sandstone is among my all-time favorite rock units, and I’ve written about it in several previous posts, including: https://roseannechambers.com/red-rock-country-on-the-colorado-plateau/ and  https://roseannechambers.com/the-escalante-sandstone-sea/ . 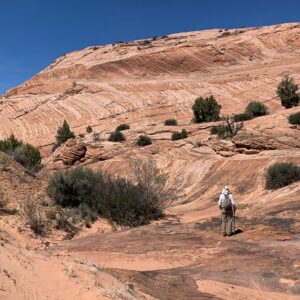 Millions of years after desert conditions ceased and during a wetter climatic period, massive quantities of sand were once again deposited in the Southwest, but this time from swamps, rivers, lakes and seaways. Unlike the arid desert dunes, these later environments supported abundant plants and animals – including the dinosaurs that would make rocks like the Morrison Formation (about 156 to 146 million years old) extremely productive for finding fossils. As the organic matter incorporated in sediments decayed during rock formation, the available oxygen was used up in the process. No oxygen was left to oxidize the iron, so these younger rocks are typically green to gray.

The fossiliferous “Blues” badlands of the Kaiparowits Formation below Powell Point (Highway 12 near Henrieville, Utah)

One dramatic example beneath Powell Point in southern Utah are the muddy sandstones of the highly fossiliferous upper Cretaceous Kaiparowits Formation, filled with the remains of small mammals, crocodiles, turtles, sharks, insects and many dinosaurs. This formation is more than 2,800 feet (850 m) thick and a uniform gray color. A dramatic contrast with the brilliant colors of the older ancient dunes in rocks just a few miles away! Fascinating! 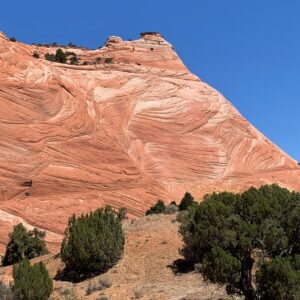 Diagram of formation of cross-bedding by Nwhit – Own work, CC BY-SA 3.0, https://commons.wikimedia.org/w/index.php?curid=17594578 and https://en.wikipedia.org/wiki/Cross-bedding#/media/File:Formation_of_cross-stratification.png

My photos from Grand Staircase-Escalante National Monument and Capitol Reef National Park, May 2021