The Star of Bethlehem, or the Christmas Star, has an important place in Christmas traditions. A mystery surrounds the history of this star, and the search for an explanation has concerned theologians, philosophers, and scientists for nearly 2,000 years—almost as old as the story itself. Despite the uncertainties, this star holds a prominent role in Christian-themed art and Christmas season decorations, planetarium shows, and other holiday elements. In this post, my focus is on whether astronomers have identified a celestial body that could have been a Christmas star.

A few widely accepted facts, to start. The earliest written reference to the star is in the Gospel of Matthew, in the first book of the New Testament of the Bible. The key lines refer to the wise men who came from the east to Jerusalem to see the baby Jesus, and the star “which they saw in the east, went before them, till it came and stood over where the young child was” (King James Bible version).

Many people in ancient cultures believed that there were connections between events on Earth and in the sky. The Dead Sea Scrolls, dating between about the 3rd century BCE and the 1st century CE, have a reference to the coming of a star and the rise of a savior or liberator. This reading is called the Star Prophecy, and some theologians have applied it to the Star of Bethlehem.

From the words in these early texts, people have developed many traditional stories. For a fuller explanation, including about the gifts of gold, frankincense and myrrh carried by the wise men, see my previous Christmas blog post: The Gifts and Myths of the Magi. 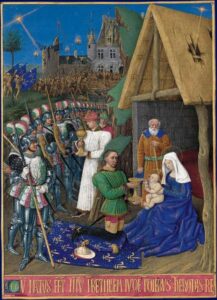 “Adoration of the Magi” by Jean Fouquet (15th century). The Star of Bethlehem can be seen in the top right piercing the roof of the manger. (Wikipedia)

For most scientific analysis, it is important to consider time. When events are a millennium or more in the past, however, it can also be difficult to precisely and accurately identify timing. Most scholars believe that the Gospel of Matthew was composed between about 80 and 100 CE, and that apostle Matthew did not actually write the text for the New Testament. This implies that the events around the birth of the baby Jesus were not within living memory of the writer(s), although they possibly spoke with those who had firsthand knowledge.

Next, what is the actual date of the birth of Jesus? Turns out that is uncertain as well. Estimates range from at least 12 BCE to 9 CE, with many scholars now accepting a birthdate between about 7 and 5 BCE. There is controversy in tying the date to other historical events, as well as in differing translations and interpretations of Bible language.

So, what was happening in the skies during the decade surrounding 7 to 5 BCE that could have become known as the Star of Bethlehem? Researchers have proposed many alternatives. Various conjunctions of the planets Jupiter, Saturn and/or Venus, or with other stars such as Regulus or in the constellation of Pisces, have support from many scholars. These have ranged from the 1614 proposal of Johannes Kepler, the German astronomer, up to researchers in the 20th century. Modern calculations, however, show sizeable gaps between these celestial bodies around that time, and/or they would have appeared in the wrong direction. Other explanations invoke a supernova—the violent explosion that can temporarily appear as a bright new star. 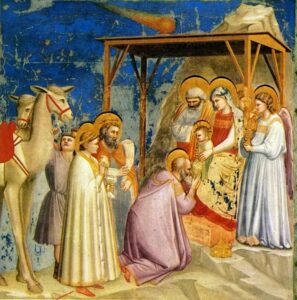 “Adoration of the Magi” by Florentine painter Giotto di Bondone (1267–1337). The Star of Bethlehem is shown as a comet above the child. Giotto witnessed an appearance of Halley’s Comet in 1301. (Wikipedia)

A widely held idea over the millennia is that the star was a comet. The first known speculation about the comet was in 248 CE by Origen of Alexandria (circa 185-253 CE), an early Christian scholar. Origen was a prolific writer, and among his many works was a Commentary on the Gospel of Matthew. The Adoration of the Magi painting by Giotto di Bondone (1267-1337) shows a comet (figure below)—and many other artists followed this lead enthusiastically—although perhaps more for dramatic effect than confidence that this was an astronomical occurrence.

The Journal of the British Astronomical Association has published details of the comet explanation in an article about the Star of Bethlehem (Jenkins, 2004). The writer states that although astronomers have searched diligently for evidence of such a star, to date there is no generally accepted answer. This suggests strongly that The Star of Bethlehem was not an actual astronomical event. However, inclusion of the star in the Gospel of Matthew is likely to have been inspired by appearances of Halley’s Comet in 12 BCE, or in 66 CE.

Halley’s Comet is visible from Earth every 75 to 79 years. Sky-watchers have observed and recorded this comet since at least 240 BCE—and probably for thousands of years earlier. A French astronomer officially named it in 1759 in honor of the English astronomer Edmond Halley. Halley recognized the periodic repeated appearances of the comet in 1705, using laws developed by his friend and colleague Sir Isaac Newton.

Astronomers now have telescopes that can find this comet at any point in its orbit. However, it won’t be clearly visible to the general population until 2061. Unlikely that I’ll be around then, but it is nice to know the likely connection of Halley’s Comet to the Christmas star. And many of us enjoy the star decorations of the Christmas season (one of mine, in the photo below). Best wishes to you and your family for warm and happy holidays! 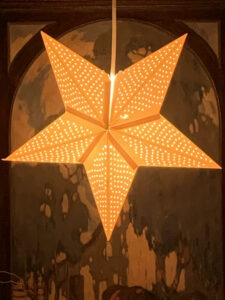 Wikipedia pages about the Star of Bethlehem, Star Prophecy, and related topics.

Adoration of the Magi, by Jean Fouquet (15th century). The Star of Bethlehem is on the top right, piercing the roof. https://upload.wikimedia.org/wikipedia/commons/8/86/L_Adoration_des_Mages.jpg

Adoration of the Magi by Florentine painter Giotto di Bondone (1267–1337). The Star of Bethlehem is shown as a comet above the child. Giotto witnessed the appearance of Halley’s Comet in 1301. https://en.wikipedia.org/wiki/Star_of_Bethlehem#/media/File:Giotto_-_Scrovegni_-_-18-_-_Adoration_of_the_Magi.jpg