Ancient Moche artists created an exceptional level of ceramic art over 1,500 years ago when this culture prospered along the arid north coast of Peru. They produced three-dimensional ceramic forms of people and animals, including “portrait heads” of men with the defining features of specific individuals, and they decorated vessels with exquisite fine-line drawings of intricate narratives. The Moche culture flourished from about 100 to 700 CE, and although they did not have a written language, their art gives us an unusually detailed look into their customs and mythology. This culture amassed great wealth and power, relying on the bounty of the sea and agricultural crops that they grew with a sophisticated system of irrigation canals. 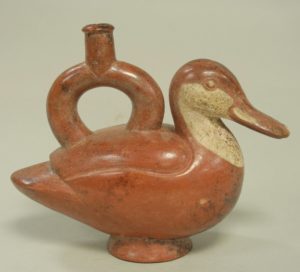 The Moche artists created many distinctive ceramic pieces with stirrup vessels. This style has a cylindrical upright spout that splits into two curved ones that join a rounded vessel, effectively combining handle and spout and used for liquids. The portrait heads on many of these vessels are fascinating and previously I wrote a blog post about them (see my post: https://roseannechambers.com/moche-faces-from-the-past/ ). Recently, I learned more about Moche ceramics (I’ve been editing a chapter titled “Decorative Arts” in the book I’m writing, “The Monumental Andes”). Several aspects of Moche ceramics caught my interest, including the realistic ceramic animals that the artists depicted, and the fine-line drawings of supernatural creatures. Courtesy of Wikipedia, I can share examples of both (keep scrolling to see all of the photos).

The animal depictions are captivating (disclosure: in college, I seriously considered majoring in zoology.) 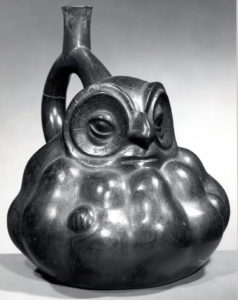 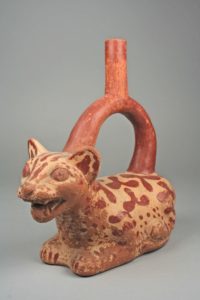 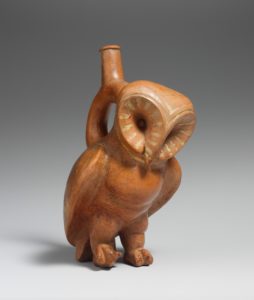 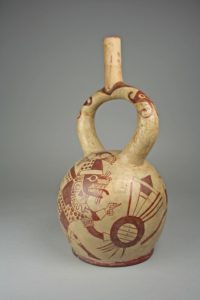 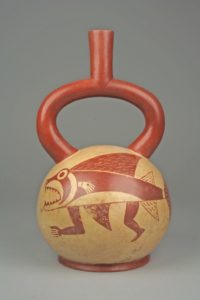 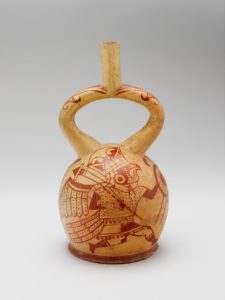 Archaeologists have made detailed rollout drawings that reproduce the scenes on the ceramic vessels as flat images. To see some amazing ones, check out the McClelland et al., 2007 reference (link in SOURCES below, or available as a pdf on Google Scholar). The creativity, sophistication, and skill of the Moche artists is outstanding! 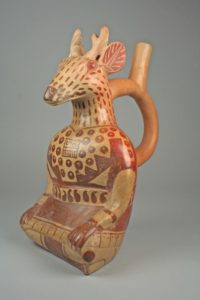