Rock art created by ancient Native American artists includes images of large mammals that are now extinct, the hunting weapons that indigenous people used, and much more. We can learn valuable information about ancient lives, traditions, and landscapes from these images. Assigning age dates to the art, and fitting it into the context of cultures and time, is challenging. Clever researchers have fortunately identified valuable clues.

While learning about the eerie mummy-like figures at the Great Gallery in Utah for a previous blog post, I became curious about rock art dating. (During my career as a geologist, we floated jokes out about “dating young faults”, which I think has a slightly better ring.) In my search for more information, I came across some that surprised and impressed me, and I want to share it. (If you missed my previous post, you can find it here: https://roseannechambers.com/mysterious-rock-art-barrier-canyon-style/)

Radiocarbon dating (carbon 14 measurement) is extremely valuable in archaeological work, except in cases of dating rock art. Typically, this is because the required amount of organic matter isn’t available, plus the process is destructive. Although artists usually combined organic binders such as egg, blood, urine, and plant and animal oils with pigments to make rock paints, the trace amounts of these substances can be too small to analyze, or hydrocarbon contamination may have occurred. Incising or pecking petroglyphs with stone tools does not involve any organic matter. 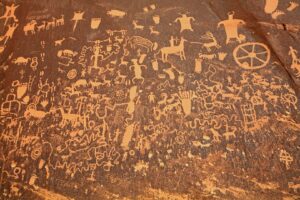 Relative dating techniques are usually required. These can include estimates of lichen growth and mineral deposit patinas that cover the artwork, as well as direct radiocarbon dating of soils or artifacts that are in contact with the art. At Newspaper Rock, in the photo above, the lighter, brighter art is younger and layered on top of the older images. For some cultures, such as the Ancestral Puebloans, rock art imagery can be similar to decorations applied to ceramic items, providing a handy dating method.

Vertical placement can also give age indications, with the oldest images at higher elevations. In river canyons of the Colorado Plateau, sand dunes against cliffs provided platforms for artists creating rock art. Later, flooding would remove the dunes, and subsequent artists would make new pictographs and petroglyphs in the cliff mark scars originally made by the now-vanished dunes.

For the Great Gallery images I wrote about in my previous post, some researchers implied age dates for the art consistent with 7,000-year-old clay figurines found in nearby caves. Subsequent studies of the age of a rockfall that removed some of the artwork indicate much later dates, with an exposure time window of 1 to 1100 CE (Pederson et al., 2014).

Most fascinating to me are images that place the rock art within particular time periods. The clearest examples are depictions of horses with riders after Europeans brought horses to the Americas in the 1500s (prominently included at Newspaper Rock). Guns, priests, and Christian symbols appeared in the rock art of the American Southwest under European influences. There are also examples that are much older. I describe two that are particularly intriguing below.

The Bow and Arrow in Rock Art

The earliest indigenous Americans used atlatls, or spear-throwers with darts, as weapons for hunting. (The darts are essentially large arrows or small spears.) Archaeologists have found many examples of this in ancient rock art and artifacts. In the Eurasian tool kit, the bow and arrow are recognized as dating back for many thousands of years, although the bow became little used or even completely forgotten for long expanses of time in certain regions.

The bow and arrow appeared in North America at a relatively late date. When, exactly, these weapons arrived in North America has been vigorously debated by archaeologists for many years. The problem is more complex than it might first appear. Specifically, only rarely has there been preservation of the wood and fiber portions of bows and arrows as artifacts, so this necessarily has focused identification on the stone arrow tips. Distinguishing arrowheads from similarly sized atlatl darts is problematic. 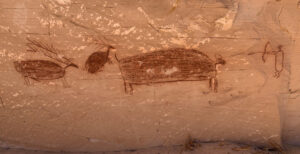 Human figure with bow and arrow from a panel in Horseshoe Canyon, Utah (younger than the nearby Great Gallery images)

There seems to be widespread acceptance that bow technology was in use in southern Utah by about 1 to 100 CE, and across North America by 400 to 500 CE. Bow and arrow images in rock art are useful for establishing these dates as the earliest possible time the artists could have created the images. By around 600 CE, these weapons were in widespread use throughout the continent, in part because of major expansions in social conflict and warfare (not a fun fact, unfortunately).

Rock walls recently discovered deep in the Amazon forest of Columbia are covered with thousands of ancient rock paintings. Among these figures are humans interacting with various plants and with deer, tapirs, monkeys, turtles, snakes, bats, and other animals. Found in the Serranía la Lindosa region, archaeologists have accumulated abundant evidence of the ancient people who settled in this region in the Late Pleistocene, beginning about 12, 600 years ago, and who continued to occupy the region for thousands of years. Particularly compelling in this artwork are what appear to be enormous Ice Age mammals that are now extinct. 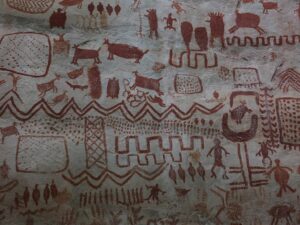 The paintings of animals found at Serranía la Lindosa are realistic. Prominent claws and a large head and body likely depict a giant sloth. A characteristic protuberance on the head and a prominent trunk indicate an elephant-like mastodon; a small head, long neck, and short curved tail suggest a camelid (most likely an ancestor of the llamas and alpacas that would eventually be domesticated by the ancient Andeans). Most surprising are images of horses, and these are definitely not the European (Old World) types like those brought to the Americas in the 16th century by the Spanish. The horses shown in the Serranía la Lindosa rock art have large and heavy heads characteristic of American Ice Age horses. (Morcote-Ríos et al, 2021; Figure 13 has photographs of all of these ancient animal images.) 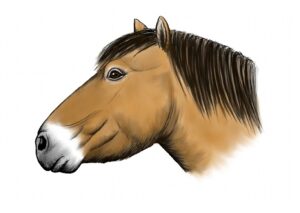 Drawing of extinct horse that roamed across North America until about 10,000 years ago

The giant sloth, mastodon, horse and many more large mammals became extinct in the Americas around the Late Pleistocene/Holocene transition roughly 10,000 to 12,000 years ago. Researchers widely debate the reasons for this dramatic rate of extinction. Over-hunting by expanding populations of humans is likely a major contributor, along with climate change and habitat loss.

The earliest rock art in the Serranía la Lindosa region was made during a time of climate change following the cold glacial periods marking the end of the Pleistocene. Rising temperatures and increased precipitation began transforming a dry landscape of patchy savannahs and thorny scrub into the broadleaf tropical Amazon forest we know today. The horse images, in particular, interest researchers because these animals were grazers and would have thrived in the open plains that are believed to be part of that transitioning environment.

Rock paintings are useful for assessing the biodiversity of regions where people were developing strategies and adaptations for survival. The images provide important records of ancient cultural traditions and landscapes. They also offer a rich record of ancient artistry with many possible interpretations of meaning.

Learning more about difficulties in dating rock art appealed to me because I’m familiar with similar challenges of dating Holocene earthquakes. Learning some of the history of bow and arrow use, and about rock art that shows extinct mammals, was a fascinating and welcome bonus. If, when reading my posts, you have related questions or interests that intrigue you, please let me know and maybe I can work information about the topics into future posts. Sending links to me for relevant articles is also appreciated (with gratitude to those of you who have been doing this). Thank you!

Photo of human figure with bow and arrow, Horseshoe Canyon, Utah; my photo.