Geologic time scales, which show the chronological sequence of events that have occurred during Earth’s history, become more or less embedded in the brains of geologists. As for other people – probably not so much. Having a rough idea of this history and familiarity with a few names, however, will be helpful if you like to think about natural history, and especially the geology topics I ramble on about in my posts. Besides, there are some noteworthy illustrations of the geologic time scale – sort of an art display, I think, similar to the colorful geologic maps in the post that I published at the end of April, “A US Geology and Art Tour”.

The spiral chart below has clever illustrations of Cambrian trilobites, Paleozoic swamps, Jurassic and Cretaceous dinosaurs, Eocene and Oligocene mammals, the Pleistocene Ice Age, and lots of volcanoes throughout history. Complex life evolved only in the past 500 million years or so, representing about 12% of Earth’s history; modern Homo sapiens have been around less than 0.1% of Earth’s history. And yes, that tiny bright spot at the far end of the spiral represents the age of the Earth: 4.6 billion years old. 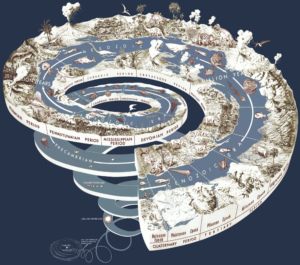 This one below is easier to read, with appealing colors.  (Note: remembering which name fits where in the scheme of eons, eras, periods, epochs, and ages is optional — I have trouble keeping all the “e” words straight!) The range of colors, as described in my US Geology and Art Tour post, are standardized for geologic maps – for example, the periods of the Mesozoic era are typically in green tones. Most of this chart displays the past 542 million years only, beginning in the Paleozoic, with only about one quarter allotted to the remaining 4 billion years of the Precambrian.

There are more nice colors and lifeforms below on one of Ray Troll’s wonderful illustrations. The colors on this scale are consistent with the colors of the different periods used on geologic maps. He shows the large extinction events at the Permian/Triassic and Cretaceous/Paleocene boundaries. 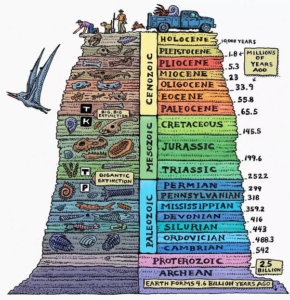 The clock representation below shows how mammals and dinosaurs overlapped for tens of millions of years. Once the dinosaurs exited the scene, mammals could rule the Earth!  This scale also shows the “Snowball Earths” — when our planet looked really different than today. The line for prokaryotes, or single-celled organisms, extends back to an amazing > 3.5 billion years ago. The best known of these are blue-green algae that accumulate into thick algal mats in dome-shaped deposits known as stromatolites. These were formerly recognized only in the fossil record, but then discovered growing in Shark Bay in western Australia in 1956.

As for deep time, this refers to the immensity and tremendous changes that have taken place during the history of the Earth.  The complexity is almost overwhelming.  John McPhee is credited with introducing the deep time term in his book Basin and Range (1981).  In this book, along with fascinating musings on a wide range of geologic topics, McPhee describes how the geologic time scale was developed during the past few centuries. I skimmed through my copy to find where he first referred to deep time (p. 133 in my paperback) and found this:

Geologists, dealing always with deep time, find that it seeps into their beings and affects them in various ways. They see the unbelievable swiftness with which one evolving species on the earth has learned to reach into the dirt of some tropical island and fling 747s into the sky.

John McPhee is an excellent writer with an impressive grasp of earth sciences, and I greatly admire his vast body of work. And sometimes I find his messages a bit difficult to understand. Regarding tropical islands and aircraft, I think the connection is aluminum – the economically viable source is called bauxite. This ore is commonly found in tropical climatic conditions, notably including the “island continent” of Australia.  Other explanations?  I will welcome hearing different ideas.

Time and the metrics we use to mark them are evolving, of course. Currently, we are officially living within the Meghalayan Age of the Holocene Epoch, which started about 4,250 years ago, beginning when a 200-year drought commenced in Asia. The term Anthropocene, in popular use for the current interval when human impact is profoundly altering the Earth, was first introduced in the year 2000. Many meanings have been applied to the term, along with numerous exceedingly grim associated phenomena. 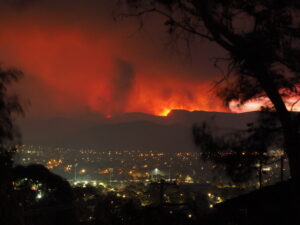 To date, Anthropocene is under consideration for formal definition and possible adoption by the International Commission on Stratigraphy. A candidate marker for the beginning of the Anthropocene is the thermonuclear bomb tests that were conducted beginning in the early 1950s. These tests spread artificial radionuclides around the Earth, where they have been accumulating in young geologic strata and will continue to reside there far into the future.

The year 2020 has brought tremendous changes worldwide, with the reminder that the order of things is neither stable nor permanent. Hopefully, more changes ahead will be for the betterment of our societies and our one green planet.

We are surrounded with people who think that what we have been doing for that one-fortieth of a second can go on indefinitely. They are considered normal, but they are stark, raving mad.

John McPhee, Encounters with the Archdruid (1971)

Geologic time scale covering the Precambrian and Phanerozoic eons with detail down to the epoch https://commons.wikimedia.org/wiki/File:Geologic_time_scale.jpg

This clock representation shows some of the major units of geological time and definitive events of Earth history. The Hadean eon represents the time before fossil record of life on Earth; its upper boundary is now regarded as 4.0 Ga (billion years ago). The three million year Quaternary period, the time of recognizable humans, is too small to be visible at this scale. https://en.wikipedia.org/wiki/Geologic_time_scale#/media/File:Geologic_Clock_with_events_and_periods.svg