Vacationing in Desolation Canyon sounds a bit, well, grim. So, I had a few twinges of apprehension about taking a multi-day white-water rafting trip through this canyon. It was formed a few million years ago when the Green River sliced through a fascinating sequence of rocks, known as the Book Cliffs, in southern Utah. Along the canyon you can see evidence of the Native Americans who lived there for thousands of years. In 1869, John Wesley Powell, the one-armed Civil War veteran who boldly led the first exploratory trip down the Green River and Colorado River, gave the name to Desolation Canyon. That explains a lot. Fortunately, the trip I joined turned out to be much more enjoyable than the rigors endured by the Powell Expedition. 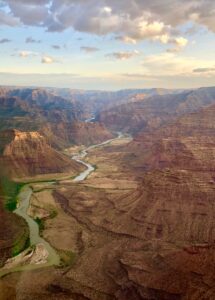 We flew in a small plane to the starting point – very turbulent air and rough landing on a dirt strip atop a plateau, but fabulous views. The spectacular aerial photo above is courtesy of excellent photographer and fellow trip participant, Ken Mitchell. 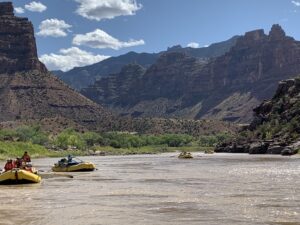 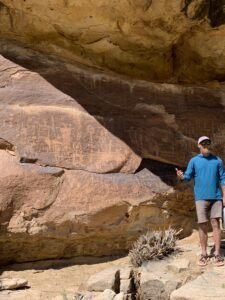 Petroglyphs on a canyon wall – probably from the Fremont people, and perhaps 1,000 years old. Nearby on the steep cliffs, an ancient granary to protect valuable grains from other hungry critters. (Difficult to photograph while  standing on a narrow cliff ledge.) As I admired the carefully constructed mortar and stones, the silent stories they told me drowned out the roar of the rapids below. 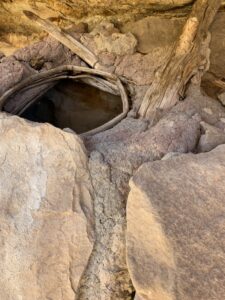 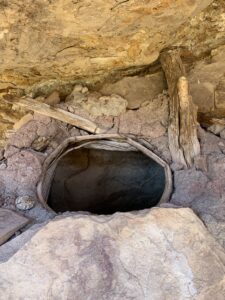 And of course, there are fabulous sandstones and mudstones in layer-cake beds. These rocks mark the locations of ancient lake and river environments — and are around 60 million years old. Bighorn sheep grazed across the rocky slopes and eagles soared in the air currents. 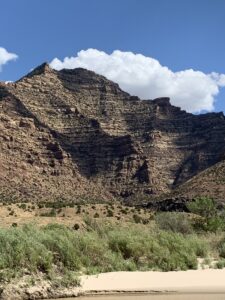 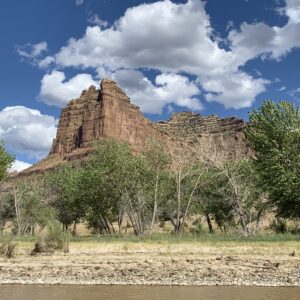 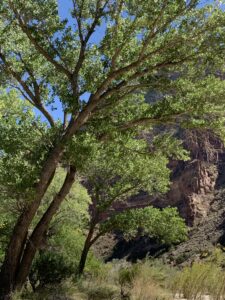 Giant cottonwood trees shaded us at times — and during the dark nights a dense carpet of shining stars sparkled above in the Milky Way. A gorgeous canyon and a great trip through Desolation Canyon.

Aerial photo by Ken Mitchell. All others: mine.