The ghosts of famous artists–and of several hundred dinosaurs who perished in disastrous floods–could be roaming the landscape of Ghost Ranch in north-central New Mexico. This high desert region with steep cliffs and colorful rocks has a long and rich history.

Georgia O’Keefe lived and painted there for many years, and guests who visited Ghost Ranch included Ansel Adams, Elliot Porter, and Allen Ginsburg. O’Keefe’s paintings have always appealed to me, especially those with southwestern themes, and so I’ve wanted to visit the area to see the landscapes that she had found so inspiring. While planning a visit to New Mexico, I found other information that I might have known during my graduate school days, but had since forgotten: Ghost Ranch is the site of one of the most important Triassic dinosaur quarries on earth. Fascinating!

Intrigued by both the artistic and scientific attributes of the region, I finally visited Ghost Ranch during a road trip to New Mexico. The spectacular landscape with expansive views, rugged cliffs of muted orange and tan rocks surrounding a cluster of low buildings, and paleontology and archaeology museums captivated me. 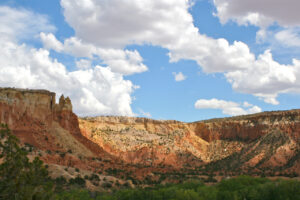 Looking Back into the Age of Dinosaurs

Around 200 million years ago, the Ghost Ranch region was part of the supercontinent Pangea, when North and South America, Africa and Europe were merged together. Located close to the equator, the area had a warmer and wetter, monsoon-like climate with heavy seasonal rainfall. Much of this land was a broad coastal plain crossed by meandering rivers where fine silt and clay were deposited. These rocks now compose the Chinle Formation, a widely distributed and distinctive rock sequence of siltstones and shales that are easily eroded. Along tall cliffs throughout the Southwest, and sandwiched between more resistant rock formations, the slopes underlain by fine-grained Chinle rocks have distinctive varied colors of maroon, purple, gray and yellow, reflecting their floodplain history.

Many primitive reptiles and amphibians thrived on these ancient lowlands. Beginning in the late 1800s, small collections of fossils found at Ghost Ranch hinted at the wealth of information hidden underground. Paleontologists were especially interested in the slender bones believed to belong to early dinosaurs known as Coelophysis, as they considered these small reptiles a “blueprint” for the extraordinary variety of dinosaurs that would soon be evolving. 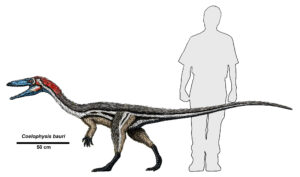 Size of Coelophysis bauri compared to a human 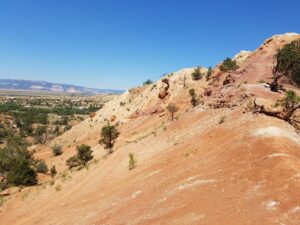 The Coelophysis quarry of Ghost Ranch in 2019.

In 1947, paleontologists discovered a rich fossil quarry of Coelophysis skeletons in Chinle rocks. Thousands of bones were found, including intact skeletons, that represent hundreds of individuals. The large number of Coelophysis suggests that possibly they gathered in packs, although groups might also have been drinking from a water hole or feeding on a group of spawning fish. Death swept in with a catastrophic flash flood. The flood washed the animals into a topographic low, possibly a small pond, where they were quickly and simultaneously buried. The exceptionally well-preserved quality of the fossils in the Ghost Ranch quarry is a rare occurrence.

Coelophysis were slim bipedal creatures only up to about 9 feet long. They had forelimbs with long claws that were well adapted for grasping prey. The narrow head and forward-facing eyes provided excellent depth perception, and teeth were sharp and jagged – traits likely showing the animals were carnivorous. During my visit to the paleo museum at Ghost Ranch, I admired a jumble of Coelophysis bones encased in a protective plaster casing. The eight-ton block was hoisted into place in 1985 to become the centerpiece of the museum. Workers constructed the building around the block, and scientists today are continuing to clean the rock matrix slowly away from the small bones. 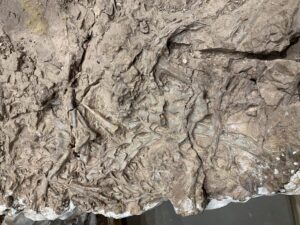 Coelophysis bones in plaster at the museum in Ghost Ranch; note the three-toed foot in the lower left corner

Georgia O’Keefe in the Southwest

The dramatic landscapes of the northern New Mexico region captured the imagination of artist Georgia O’Keefe from the time she left New York for her first summer visit to the region in 1929. She began collecting bleached animal bones as symbols of the desert, even shipping many back to New York where she was spending winters. Initially a part of the Taos art colony, she eventually found her way to Ghost Ranch in 1934, where she became entranced by the area and rented space there in the summers. In 1940, the owner of the ranch, Arthur Pack, sold 8 acres and a house to O’Keefe. She lived and painted in that house for extended periods of time until her death in 1986 at age 98. 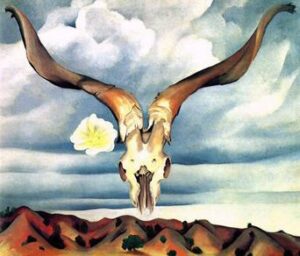 When she first visited the Southwest, O’Keefe learned to drive a Ford Model A, and over the decades she explored the region by car, frequently camping. She painted many geographic features repeatedly, including the Chama River canyon and Cerro Pedernal–an impressive flat-topped mesa capped by volcanic rock on the distant horizon. O’Keefe reportedly said: “”It’s my private mountain. It belongs to me. God told me if I painted it enough, I could have it”. Apparently her ashes are scattered on top of this monumental feature. 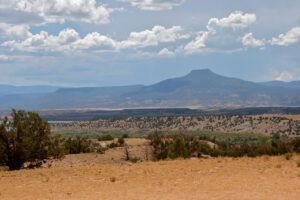 The natural history of the Southwest fascinated O’Keefe, and the work at the Coelophysis quarry intrigued her. She spent many hours watching the excavations and quizzing the paleontologists about the project. Years after her death, scientists gave the name Effigia okeeffeae — O’Keefe’s Ghost — to an ancient archosaur, an extinct ancestor of modern crocodiles found at Ghost Ranch.

The owner of Ghost Ranch beginning in 1935, Arthur Pack, was fortunately an environmentalist who recognized the value of keeping the over 20,000 acre ranch intact, but also sharing its beauty with others in a way that would preserve the fragile landscape. After discussions with the YMCA, Boy Scouts of America, and other organizations, in 1955 Pack gave the ranch as a gift to the Presbyterian Church. Famously reclusive, Georgia O’Keefe was furious! She had wanted to own the property — ideally, to keep everyone else out.

Today, Ghost Ranch is an education and retreat center with archaeology and paleontology museums, and offerings of tours, workshops and retreats that cover topics ranging from the natural sciences to art, health and spirituality. The setting of tall cliffs and colorful rocks is spectacular, and there are hiking trails across the ranch property and into US Forest Service land. The Ghost Ranch landscape is reminiscent of Utah’s canyon country–probably at least part of the reason that so many, including myself, find it so appealing.

A framed poster of an O’Keefe Chama River painting has been in my house for many years. Now it reminds me of the mystery and magic of Ghost Ranch. I’d like to explore this area more thoroughly; I’m already planning another visit. 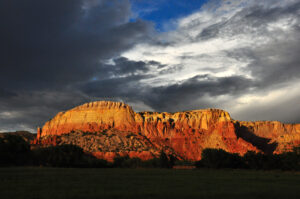 Interest is the most important thing in life; happiness is temporary, but interest is continuous.

Photo of the Coelophysis Quarry (also known as the Whitaker Quarry) overlooking the facilities of Ghost Ranch in New Mexico  by Neil Pezzoni.  https://commons.wikimedia.org/wiki/File:Ghost_Ranch_Coelophysis_Quarry.jpg

My photo of Coelophysis bones in museum display at Ghost Ranch

Photo of Cerro Pedernal from Ghost Ranch, 2011 by Artotem. https://en.wikipedia.org/wiki/Georgia_O%27Keeffe#/media/File:Pedernal_Mountain,_NM.jpg