California and other Western US states are facing another major drought. Leading the long list of alarming news: a snowpack that is approximately 50% of normal throughout the region. The wildfire season is already underway also, stoking fears of fire in treasured places, among them majestic Yosemite Valley. I am also reminded of two types of “firefalls” in Yosemite Valley. The first, now relegated to history, arose from the distinctly unnatural practice that people developed of pushing a large evening bonfire off a rocky ledge at Glacier Point, providing a “waterfall” of embers falling a few thousand feet into the Valley. The second is the popular practice of attempting to photograph Horsetail Falls when the water is illuminated by a winter sunset. First, more about droughts and fires.

Over three-quarters of the West is currently in drought conditions, with roughly half of these areas rated “severe” or “extreme” by the US Drought Monitor (May 18, 2021 map, below). I wrote about the La Niña weather pattern that was underway across the Pacific Ocean back in January. Peak intensity occurred by early winter, and the strong easterly winds and anomalously cool band of water across the equatorial Pacific blocked normal snow and rainfall throughout most of California and the Southwestern US. (That post is here: https://roseannechambers.com/encounters-with-the-enso-part-1/)

Now, NOAA has announced that La Niña has ended, although it could return in the fall or winter. Regrettably, La Niña departed too late to bring any drought relief to California, which transitions to a climatologically drier time of the year in April and is now in a dry season that will last into next fall. 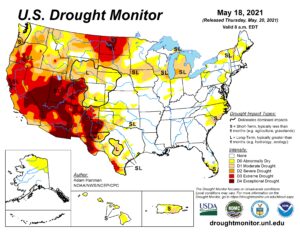 Above-normal spring temperatures in many western regions led to rapid spring snow melts. The dry soil soaked up this water, so lower amounts than usual made it into rivers, lakes and reservoirs. Lake Tahoe, in the Sierra Nevada of California, has a water level 2.5 feet (0.76 m) lower than this time last year (US Drought Monitor report, May 18,2021). Groundwater levels in many areas have been severely depleted and wells are drying out. Trees and other plants are exhibiting extremely low moisture levels. There is reduced pasture forage for grazing animals, including domestic livestock. Low water levels and warmer temperatures in rivers are creating adverse conditions for fish and other aquatic species. Water restrictions are being announced in California and other drought-stricken areas. It is a deeply concerning situation.

Wildfires have always had a place in California landscapes, but the ones that have plagued the state in recent years have been unusually destructive. As the climate warms globally, fire “season” is lengthening to cover an increasingly longer period each year. The hot and dry conditions in the west during 2020 fueled a record-breaking wildfire season. Over 15,900 square miles (41,270 sq km) burned, including the largest fires on record in California and Colorado. Other western states, even normally green areas of Oregon, suffered from wildfires. Traveling around the Western US, one can see enormous and unpleasant expanses of blackened trees and vegetation that are the scars from these fires. Many worry about the new areas wildfires might reach in the coming months and years.

A post titled “Yosemite Valley This Week: A Moment of Spring Richness and an Uncertain Future”, on the Geotripper blogspot by geologist Garry Hayes, captures this concern poignantly. Yosemite Valley is incredibly beautiful in spring, but knowledge of low moisture levels and unhealthy vegetation are fuel for trepidation about the future of this spectacular place. You can read Garry’s post, and see his excellent photos of the Valley, here: https://geotripper.blogspot.com/2021/05/yosemite-valley-this-week-moment-of.html .

Yosemite Valley ranks among the most spectacular localities on our planet. From the soaring cliffs of gray granite to the majestic oaks and conifers, open meadows, sparkling waterfalls, flowing streams and river, it is a magical place. As a lifelong resident of the San Francisco Bay Area, I have had the good fortunate to wander on adventures around this Valley since my earliest childhood years. (And, I still marvel over the only 4-hour drive to be transported to this favorite place, especially after hearing my father’s stories of the two-day drive from the Bay Area that he remembered with his parents.) 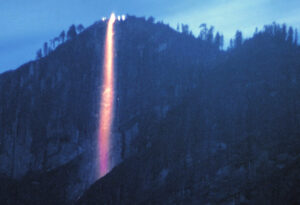 Yosemite Firefall into the Valley from Glacier Point

Watching the drama of the firefall from Glacier Point is among my mid-1960 memories of Yosemite Valley. This event marked a dramatic end to open-air evening programs led by Park Service staff in the Valley. Early every summer evening a large fire would be built on a rock ledge 3,000 feet above and then at 9:00 pm pushed over the ledge so that the fiery embers resembled a waterfall, eliciting oohs and aahs of awe from the gathered crowd. The firefall was started in 1872 by the owners of the Glacier Point Hotel and continued intermittently for almost a century. The Park Service finally discontinued the practice in January 1968, as inconsistent with an appreciation of natural wonders (definitely!). This also eliminated the necessity of staff having to collect the red fir bark to fuel the fire from increasingly long distances, plus avoided the crowds who had caused traffic snarls and trampling problems while watching the event from the Valley. Later, in 1969, the Glacier Point Hotel burned down, and has not been replaced.

A recent phenomenon gaining in popularity is dubbed a “firefall” in homage to the now historic Glacier Point event. For a couple of weeks each February, the setting sun can illuminate Horsetail Falls rising above the valley, giving this waterfall the glowing reds and oranges reminiscent of embers. First photographed by Ansel Adams in 1940, the optimal conditions required for it to occur don’t happen every year. It nonetheless draws increasing numbers of photographers to various viewpoints in hopes of a catching memorable shots, creating yet another crowd-control challenge for the Park Service. The photos are impressive, and while I’d like to see this “live”, as a crowd-avoider, I probably won’t. 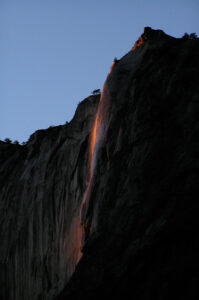 Horsetail Falls in Yosemite Valley illuminated by a winter sunset

Among the most notable aspects of Yosemite Valley are the granitic rocks that form Half Dome, El Capitan, and the other rock outcrops surrounding this spectacular place. Decades ago, during my rock-climbing days, I had many opportunities to admire Yosemite Valley granite. More recently, I hiked to the top of Half Dome–a major and memorable solo accomplishment. Climbing along the cables set up on the steepest stretch provides a unique opportunity to observe this granite, which has ample friction to allow firm footing. Yosemite granite features contributed to the success of Alex Honnold’s incredible climb of the “Freerider” route on El Capitan. The documentary about this feat, Free Solo, won the Academy Award for “Best Documentary Feature” for 2018 films; in a blog post I wrote that the granite deserves recognition as “Best Supporting Rock” (you can read that post here: https://roseannechambers.com/granite-free-solo/).

If, or whenever, you find yourself in Yosemite Valley, there are many wonders to appreciate. And we can all hope that an uncontrolled wildfire, a most unwelcome visitor, will never be part of the picture.

Map and drought summary produced by US Drought Monitor for May 18, 2021. https://droughtmonitor.unl.edu/CurrentMap.aspx