A huge and violent volcanic eruption occurred near Yosemite National Park on the eastern side of California’s Sierra Nevada about 760,000 years ago. This “super-eruption” was estimated to be more than 2,000 times larger than the 1980 eruption of Mt St Helens. The eruption was so large that ash falling close to the volcano, known as the Bishop Tuff, reaches a thickness of more than 4,500 feet. Airborne ash covered much of the western US, and fell as far away as Nebraska, creating a valuable geologic time marker for geologists. The volcano erupted such an enormous volume of magma that the ground surface sank down more than a mile into the space where the material had once resided. The oval depression that formed, called the Long Valley Caldera and located in the Owens Valley today, is about 10 miles wide and 20 miles long. The Mammoth Lakes resort area is on the western edge of this ancient caldera.

A string of young volcanoes, known as the Mono-Inyo Craters chain, extends from the Long Valley Caldera northward about 25 miles toward Mono Lake. Around 400,000 years ago volcanoes stirred to life along this chain. These included a series of eruptions that formed Mammoth Mountain, beginning roughly 220,000 years ago and ending 50,000 years ago (recent, in a geologic timeframe!). This region is accommodating some of the strain between the colliding Pacific and North American tectonic plates, in an area of geologic deformation known as the Walker Lane. 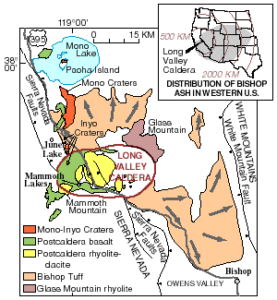 Volcanic activity has continued in this region during the past few thousand years, with small to moderate volcanic eruptions somewhere along the Mono-Inyo Craters chain occurring every few hundred years. Most recently, a small eruption formed Paoha Island in Mono Lake about 300 years ago. Local hot springs and steam vents throughout the Owens Valley region are evidence that hot magma is heating groundwater in the the region around the Long Valley Caldera.

The pressure of magma rising and moving deep below the surface in the region is triggering earthquakes. In 1978 a series of earthquakes began that continues today. On May 25, 1980, just seven days after the explosive eruption of Mount St Helens in Washington, three magnitude ~ 6 earthquakes occurred on the same day near the caldera, with a fourth earthquake one day later. USGS scientists rushed out to monitor the region and to look for other evidence of volcanic unrest. They found it: like bread dough rising in a warm kitchen, the center of the caldera was almost one foot higher than it had been the previous year.

Warnings about the possibility of a volcanic eruption went out into the Mammoth Lakes area community. Not too surprisingly, local business owners, real estate agents, and others in this tourist area were not pleased with the alarm. Over the years, however, continuing earthquakes that could be felt by local residents eventually convinced most that something really was happening underground, and that geologists were not making up stories. 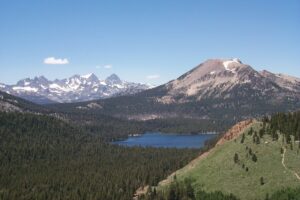 The land surface has continued to rise. By 2014 the doming was more than 2.5 feet and affecting more than 100 square miles. Studies have indicated that some of the expansion may be related to fluid release from magma related to the formation of the Long Valley Caldera, but other compelling data indicate that there is an intrusion of new magma, along with a large volume of partially melted rock, within the mid-and lower crust. The earthquakes continue, and while most are small, some have reached magnitudes larger than 5.0. 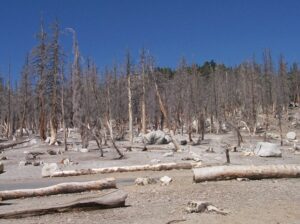 Monitoring of the region by USGS, in partnership with other organizations, is ongoing and scientists have made estimates of the associated hazards. Evidence of unrest, including earthquake swarms, and steam and gas emissions, increase the probability of an eruption. Future eruptions are likely to be small to moderate in size; a large eruption appears to have a low probability. A new eruption is most likely to occur somewhere along the Mono-Inyo Craters chain, rather than within the ancient caldera. No one can say with any accuracy when this will occur. Scientists are watching closely – nature holds many surprises! 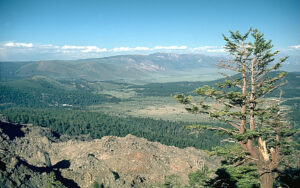 Rim of Long Valley Caldera, view towards the east

Photo of Mammoth Mountain and Ritter Range by Hike395, 2000; https://en.wikipedia.org/wiki/Mammoth_Mountain#/media/File:Ritter_Range_and_Mammoth_Mountain.jpg

Photo of trees killed on south slope of Mammoth Mountain, by Hike395, 2000; https://en.wikipedia.org/wiki/Mammoth_Mountain#/media/File:TreeKill.jpg