Earthquakes and Other Surprises in the Basin and Range

Earthquakes and Other Surprises in the Basin and Range

If you have admired the vast and empty Nevada landscape that unfolds during a drive across, or an airplane flight above, this western state, then you have seen some of the territory that composes the Basin and Range. The principal features of this region are rugged mountain ranges and arid deserts. There are lots of areas of bare rock and sand. Cactus and sagebrush. Lizards. The Basin and Range geographic province covers an enormous area of the western US with similar landforms and climate, and it has a geologic history that is different from adjacent regions. The region also holds many surprises.

In the Basin and Range the Earth’s crust is currently being stretched. This amount of stretching is significant and might be more than you would guess. GPS measurements indicate that Reno and Salt Lake City are currently moving apart each year by an average of about one half-inch. Although that may not sound like much, consider what is causing this motion: earthquakes. Thousands of them – and they are happening every day. Most are small – but some are magnitude 7 or larger. And it is guaranteed that more large earthquakes will shake towns and cities in the western US in the not-too-distant future.

The Basin and Range landscape is dominated by a north-to-south-oriented, washboard-type pattern of a mountain range next to a valley, and then another mountain range, and another valley, and on and on. Flanking each mountain range is at least one earthquake fault; some ranges have faults on both sides. Most of those faults are active, meaning they are storing the stress that is slowly building up in the surrounding rocks. Eventually, that stress will be violently and instantaneously released in an earthquake.

The Basin and Range includes an impressive number of mountain ranges — some 500 of them, with lengths from about 40 to 100 miles or more, and widths from 10 to 20 miles. This distinctive topography stretches across the western US from the precipitous mountain front on the eastern side of the Sierra Nevada in California to the steep west-facing front of the Wasatch Range in Utah, a distance of more than 500 miles. On the north, the Basin and Range province includes large sections of southern Oregon and Idaho and then extends south far into Mexico.

The geologist Clarence Dutton, who was also a US Army officer during the Civil War, is said to have referred to this topography as an “army of caterpillars marching toward Mexico.”  A fitting reference! The map below is part of the USGS Geologic Map of the United States published in 1974. My recent post “A US Geology and Art Tour”, describes this map and also refers to a post by Marli Miller, here : https://geologictimepics.com/ . 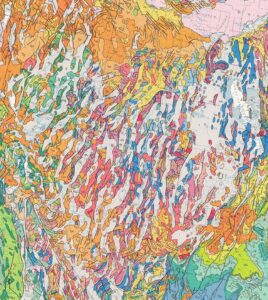 Geology of a part of the Basin and Range province; mountains are shown by the bright colors representing older rocks and basins are light in color with young alluvial sediments

How did these “caterpillar” mountain ranges form? Not surprisingly, it is a complicated story; here is a short version. Between about 43 and 21 million years ago, the Farallon tectonic plate was crashing eastward into the North American continental plate, which was moving westward. On the western side of the continent, compressive forces were building mountains (a classic demonstration: push one end of a carpet toward the other end; the rumples that start to grow represent mountains). Since oceanic crust is more dense than continental crust, the Farallon plate plunged beneath North America in the process called subduction. As the oceanic plate headed tens of miles deep into the Earth, huge volcanic eruptions exploded throughout the region that we now recognize as the Basin and Range.

Then, sometime around 20 million years ago, the Farallon plate disappeared into the subduction zone and the volcanic eruptions stopped. Next, the stretching of the Basin and Range began. The oceanic Pacific plate commenced encroaching onto North America, but instead of heading east, this plate was moving northwestward. To accommodate the new side-to-side sliding motion, the San Andreas fault zone developed and absorbed some of the pressure from the Pacific plate – but not all of it. East of the San Andreas, the crust began to be dragged and stretched towards the northwest, creating the pattern of normal (dip-slip) faults that we see in the Basin and Range. Of course, the devil is in the details (including heat flow, isostatic uplift, mantle upwelling, and other technical topics) so there is ongoing scientific controversy over what is really happening in the Basin and Range, but most researchers would agree that the basic story is as outlined above.

Over millions of years the mountains in the Basin and Range have grown higher. This has exposed a jumble of rocks of all types, as can be seen by the variety of “caterpillar” colors on the geologic map. The volcanic rocks related to the long episode of subduction are especially prominent. In the intervals between earthquakes, the erosive forces of wind and water break down these rocks and wash the sediments downhill, where thick layers accumulate in the basins below the mountains.

Frequent earthquakes indicate the faults within certain zones of the Basin and Range province are continuing to be stretched. For the past few hundred years, most of the large earthquakes have occurred in areas of low population density, so few deaths and little damage resulted. This is changing, however — as populations increase, the potential for tragedy increases dramatically. Two regions are at especially high risk: on the west, the Carson City-Reno-Lake Tahoe area and to the east, the greater Salt Lake City metropolitan area. We know earthquakes will occur, but we cannot predict when and where.

Something else that might be surprising about the Basin and Range: the region contains a staggering amount of wealth in the form of metallic ores. Tremendous quantities of gold, silver, zinc, lead, iron, molybdenum, mercury, uranium, and tungsten have been, and continue to be, mined in these mountain ranges. The metallic elements accumulated because of the long history of volcanism that emplaced enormous amounts of hot magma onto and just below the Earth’s surface. The groundwater that was heated up during these cataclysms dissolved, mobilized, and concentrated the metals, which then solidified into the rich concentrations that are sought today.

There is much much more to say about the Basin and Range – but I’ll end with a quote from John McPhee’s Basin and Range.  In just a few words, he manages to capture the aspects that continue to draw me to this beautiful region.

Panoramic view of the Basin and Range