Geologists love to have a bird’s eye views of landscapes. They are helpful for all types of research – tracing active faults and identifying copper ore deposits among them. By inspecting aerial photographs and maps, and by peering down from small planes and helicopters, geologists can absorb the Big Picture. Desert environments, where the absence of vegetation means there are unobstructed views of rocks, are ideal for seeing geologic features.

Recently I came across a blog post written by geologist Stephanie Sykora and her exploration work to find copper ore in the Atacama Desert of Chile. Her good descriptions of the helicopter-supported work, together with photos of the arid landscape, reminded me of the months I spent in the Sahara Desert in Egypt several decades ago. The team I worked with also had helicopter support – only we were searching for active faults, the possible sources of earthquakes that could potentially adversely affect the Aswan High Dam. In this post, I’ll share these two stories – one about Egyptian earthquakes and another about Chilean copper. They are tied together by arid landscapes and helicopters. 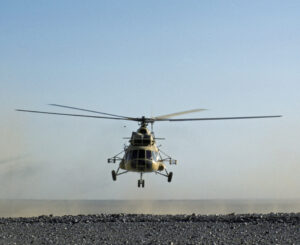 One of the Egypian Airforce helicopters we used for fieldwork

Earthquakes near the Aswan Dam

The Aswan High Dam, built across the Nile River about 350 miles south of Cairo, is an embankment dam filled with locally quarried rock and sand, with a central clay core. It is one of the largest dams on the planet and Lake Nasser, impounded behind the dam when filling began in 1964, is one of the largest artificial lakes on earth. The vast majority of the population of Egypt lives within the area that could be inundated if the dam were to fail. So, when a few magnitude 5 earthquakes occurred near the reservoir late in 1981 and early in 1982, there was some cause for concern. Although the moderate size of these events and their distance from the dam did not pose a direct threat, the potential for larger earthquakes closer to the dam potentially could. Accordingly, studies were planned to evaluate the tectonic setting of the region, the fault activity in the region, and the degree of resistance the Aswan High Dam has to earthquake ground shaking.

I had the exceptional opportunity to be part of a team of geologists, earthquake engineers, and structural engineers conducting these studies in 1985. It was a great thrill to be in Africa – the first time I had used a passport — and then to be able to do fieldwork (while actually being paid a salary!) in the Sahara Desert! 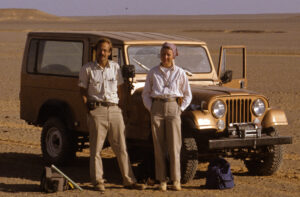 Field partners in the Sahara Desert

Geologists began by obtaining aerial photographs of the region around the dam and identifing the linear features that could be fault scarps, expressed as lines of small cliffs. Then, we needed to field check these features and assess how recently they had generated earthquakes. Security around the Aswan High Dam was understandably tight, so the Egyptian Airforce entered the picture, providing pilots and helicopters for our exploration work. With a bird’s eye view of the landscape, and easy access to the features we had targeted to examine on the ground, we found active faults.

During our explorations we identified locations where trenches could be excavated so that we could look for evidence of ground-rupturing earthquakes in the shallow subsurface. The disturbance left by these trenches along one fault is visible on Google Earth images – also visible is the linear fault scarp, which can be seen in the photo below. We concluded that the relatively short lengths and small displacement earthquakes that were revealed in trenches indicate that future earthquakes would be of moderate magnitudes (i.e., smaller than would be expected on longer faults, such as the San Andreas in California). The engineers analyzing the seismic resistance of the dam found that the structure was sufficiently robust to not be compromised by earthquakes originating on these faults. 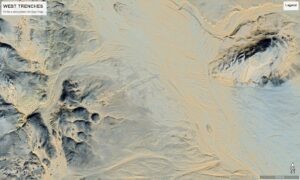 The section of the Sahara Desert where we worked is extremely dry. While walking for miles across that vast sea of sand and rock, I never saw even a shred of vegetation. Smoothly polished, three-sided pieces of limestone, sand-blasted in the desert conditions and known as ventifacts, were intriguing. The small ones I carried home are now a prized part of my rock collection. 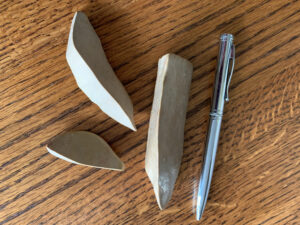 The helicopters provided fabulous views of the landscape – especially because there was an open door on one side, and by hanging on tightly to conveniently placed handholds, we could lean out of this door for even wider views. When our flights passed over enormous Lake Nasser behind the dam, I particularly liked spotting the dark shapes of crocodiles. It was good to be in the air high above the water! 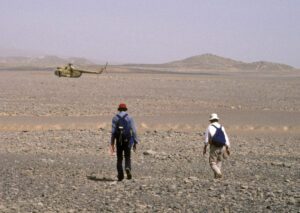 There were many challenges to working in Egypt — from equipment procurement and security hassles, to my digestive problems from the important social practice of drinking tea with Aswan officials (the water was heated, but probably never reached boiling temp), to simply working in a conservative Arabic country — but overall it was an amazing and memorable experience.

Copper in the Atacama Desert

The Atacama Desert is located along an approximately 1,000 mile strip bordering the Pacific Ocean on the western edge of the Andes Mountains, extending from southern Peru into northern Chile.  It is the driest nonpolar desert on Earth, and many areas are completely devoid of rain year after year. Elevations range from sea level to high peaks over 16,000 feet, with large areas of salt flats, such as the Salar de Atacama with an average elevation of 7,500 feet.  The geologic history of this part of the Andes includes extensive volcanic activity, associated with multiple episodes of subduction, and this has resulted in vast accumulations of many metallic minerals. Copper is an especially abundant metal in the Atacama Desert regions of Chile. 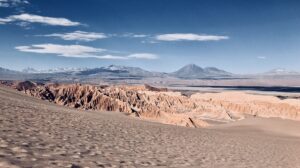 Sand and snow-dusted peaks in the Atacama Desert of Chile

The indigenous Andeans highly valued copper and many ancient societies excavated mines and quarries to obtain this metal. Copper was combined with gold, silver, and other minerals in alloys that improved properties for shaping metal objects. Early in their reign, the Incas expanded their empire from the Cusco region into the Atacama Desert to access the valuable copper and other metal deposits. In this desert, as early as 5,500 years ago, ancient artisans hammered copper into thin sheets of foil and then rolled the foil into beads that have been found in elite burials. A few thousands of years later, copper-tin and copper-arsenic alloys, also known as bronze, were being fabricated for tools.  I’ve written several blog posts about metals and the ancient Andeans, including one about copper, here:  https://roseannechambers.com/a-foundation-of-copper/ .

In the post published by Stephanie Sykora she describes helicopter-supported mineral exploration work in high and remote regions of the Atacama Desert. Rocks with prominent orange color anomalies, products of hydrothermal alteration, are examined and samples collected, as the colors provide hints about the possible presence of extensive copper deposits in the subsurface. Check out her post and great photos here:  http://exploringtheearth.com/2020/06/29/colour-anomalies-copper-chile/ .  I admire the opportunities Stephanie is having to roam in wild natural areas – especially in the Andes Mountains.  And I have many good memories of the  fieldwork I did in Egypt.

Photos of 1985 fieldwork in southern Egypt by Ross Wagner, accomplished and talented field geologist and friend; special thanks to Ross for digging out and converting slides into jpeg files.

Photo of the Atacama Desert by LuWe1998 from Pixabay https://pixabay.com/photos/desert-sand-atacama-drought-4169193/