Five great earthquakes of magnitude 9 or larger have been recorded in the past century. Devastation and death followed each one, as the extremely powerful forces of these events wreaked havoc across the planet. There are interesting similarities and differences between these events, and the information gained will help to mitigate the effects of future great earthquakes. 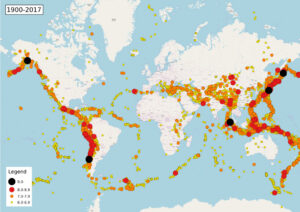 The great earthquakes in Alaska in 1964 and Chile in 1960 originated beneath coastal cities and the other three offshore, within about 100 miles (160 km) of the coast. Each of the five originated at relatively shallow depths below the surface of about 15 to 20 miles (25 to 32 km) deep. All five earthquakes originated along subduction zones, and all created major tsunamis. (More about how these originate in my post: Great Earthquakes – From Distraction to Disaster.)

Ground shaking during these earthquakes lasted from about 5 minutes to 10 minutes–resulting in major damage to structures and shattering the nerves of the many thousands of people riding out these ground motions. Major tsunamis were triggered and affected communities in many countries. Close to where an earthquake originates, tsunami waves frequently are far more deadly and destructive than the ground shaking. In several cases, tsunami wave heights were much greater than expected, with some exceeding 100 feet (about the same as a 10-story building)–terrifying, but not uncommon from great earthquakes.

The amount of energy released by an earthquake in seismic waves, essentially the strength of the earthquake, is quantified in magnitude scales. A logarithmic scale is used, so there is a tenfold increase in seismic wave amplitude in each unit increase (e.g., from 8.0 to 9.0). This represents an approximately 32-fold increase in the energy released–an enormous difference as larger earthquakes occur, shown in the figure below. 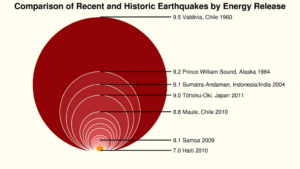 Comparison of recent and historic earthquakes by energy release, NOAA

The subduction zone that is uplifting the Andes Mountains has the dubious distinction of being the location of the most powerful earthquake ever recorded instrumentally. We know this event as the Valdivia Earthquake, after the busy harbor town that was essentially flattened on May 22, 1960, in central Chile. A stretch of fault broke that was about 500 miles (800 km) long. Numerous landslides occurred in the steep mountain valleys of the southern Andes. The outflow of Rinihue Lake was blocked and, as water levels rose, settlements below were threatened with inundation and tens of thousands of people had to be evacuated until the drainage could be reestablished. The accompanying tsunami devastated the Chilean coast and caused about 6,000 deaths.

The second largest instrumentally recorded earthquake occurred on the interface between the Pacific and North American plates, about 78 miles (125 km) east of Anchorage, Alaska. Many coastal Alaskan towns were heavily damaged by ground shaking, ground subsidence, earthquake-caused fires, and tsunamis. Extensive damage occurred in Anchorage because of landslides and liquefaction (the sudden loss of strength in unconsolidated and water-saturated sediments). Vertical displacements of up to 38 feet (11.5 m) substantially rearranged the landscape over a vast region, with some areas subsiding and other areas uplifted. 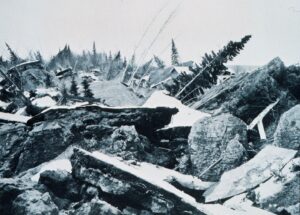 1964 Alaska Earthquake landslide damage in Anchorage along Knik Arm, causing substantial damage to many homes in the Turnagain-By-The-Sea subdivision

The major tsunami produced by the earthquake was accompanied by about 20 smaller and local tsunamis, produced by landslides both above and below sea level. The smaller waves were responsible for most of the damage in Alaska. The highest recorded tsunami wave had an incredible height of about 220 feet (67 m). Authorities reported a death toll of 131. 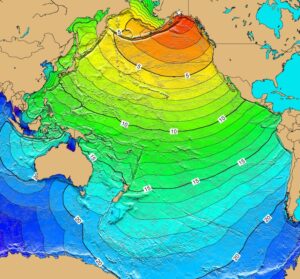 The M9.1 2004 Sumatra-Andaman earthquake, also known as the Indian Ocean earthquake and tsunami, is the third largest earthquake recorded in the past century and by far the most devastating. Occurring on December 26, 2004, many tourists from other countries and locals were in beachside towns. There were many unusual features about this earthquake, including an extremely large rupture length of about 1,000 miles (1,600 km) between two tectonic plates, the Burma and Indian plates. Ground shaking lasted for eight to ten minutes, which is the longest duration of faulting recorded. Seismic ground motions were generated around the globe, with seismographs indicating surface waves encircled the planet and returned to the region where the earthquake originated after about 200 minutes.

In addition to the enormous amount of plate rupture, the seafloor rose by several feet, creating a massive tsunami. Tsunami waves reached coastlines between 15 minutes and 7 hours following the earthquake, with many waves reaching nearby areas including Sri Lanka and Thailand within about 2 hours. Some waves were as high as about 167 feet (51 m) and multiple waves hit many areas, with the 2nd and 3rd waves the most destructive. In the hard-hit Banda Aceh province on the island of Sumatra, waves reached as far inland as about 2 to 2.5 miles (3 to 4 km). Tough to outrun, even if you knew it was coming, which few did. The total death count is about 227,900, with 125,000 injuries reported. 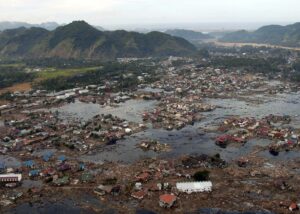 A village near the coast of Sumatra in ruin after the tsunami that struck South East Asia in 2004. U.S. Navy photo by Photographer’s Mate 2nd Class Philip A. McDaniel

This earthquake occurred near the east coast of Honshu, the main island of Japan on March 11, 2011, where the Pacific plate is subducting beneath the plate underlying Honshu. The earthquake moved Honshu about 8 feet (2.4 m) to the east, closer to North America. The powerful tsunami that was triggered produced waves of up to 133 ft (40.5 m) in Japan and widespread devastation followed. Snowfall and freezing temperatures following the earthquake hindered rescue efforts. The official death count is 19,474.

This earthquake is best known to many as the cause of substantial damage to the Fukushima Daiichi nuclear plant, in which three reactors experienced loss of reactor core cooling and experienced meltdowns, accompanied by the release of radioactive substances. The largest tsunami wave to hit the plant was about 45 feet (14 m) high and overwhelmed the plant’s ground level, which was only 33 feet (10 m) above sea level; this wave height was approximately double the highest wave predicted by officials. Construction of the nuclear plant began in 1967, and outdated design features, combined with construction errors and many human errors, including managers who ignored warnings of probable tsunami heights, were major contributors to this disaster. Subsequent investigations described a culture of complacency about nuclear safety and poor crisis management.

Ocean energy distribution forecast map for the 2011 Sendai/Tohoku earthquake from the U.S. NOAA

A major tsunami produced as many as three waves about 50 to 60 feet (15 to 18 m) high, destroying settlements in the region. The hardest hit was the community of Severo-Kurilsk, where more than a third of the estimated 6,000 inhabitants died. After the earthquake,  citizens fled into the hills and escaped the first wave, but many returned to the town — a fatal mistake when the second wave appeared. The reported death toll is about 2,300, although some estimates are as high as 17,000.

Major tsunamis can affect the coastal areas of numerous countries when they are triggered by great earthquakes. The Pacific Rim region is the most vulnerable, as it was affected by four out of five of the M9 earthquakes, with the 2004 event affecting countries all around the Indian Ocean. Hawaii, which has been hit hard by most large tsunamis originating around the Pacific Rim, has had a warning center since 1949 operated by the National Oceanic and Atmospheric Administration (NOAA). Called the Pacific Tsunami Warning Center, it was established following the 1946 M8.6 Aleutian Islands earthquake that resulted in over 170 deaths in Hilo, Hawaii.

In the 2011 Japan earthquake, millions received alerts from an earthquake early warning system and tsunami warnings, and these are credited with saving many lives. Nonetheless, extensive loss of life occurred because tsunami waves were much higher than expected, overtopping sea walls that had been built in several cities to protect against such events, and even flooding designated tsunami evacuation sites. Needless to say, following this earthquake, geologists and engineers worldwide scrambled to review possible tsunami impacts to critical facilities such as power plants and hospitals.

By far, the largest number of deaths occurred around the Indian Ocean in 2004. The absence of warning systems in the Indian Ocean region was definitely a contributing factor. This situation has now improved, since the Indian Ocean Tsunami warning system was formed in 2005. Some aboriginal populations in the Andaman Islands near India experienced few casualties in 2004, based on traditional folklore warning that ground shaking could be followed by a high wall of water. Useful knowledge! 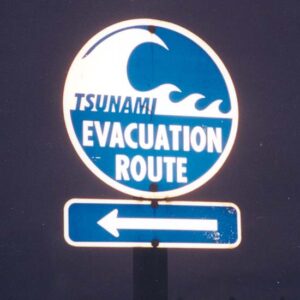 Whenever you are in a coastal area, especially around the Pacific Ocean, be aware that a tsunami is a rare but possible event (low probability – high consequences!). If you experience strong earthquake shaking, moving to higher ground as quickly as possible would be wise. Tsunami waves occur sometimes with no warning signs–a wave simply builds and crashes, surprising people and giving them little time to flee. Other times, the sea water temporarily recedes from the coast–with fatal results for those who venture out on newly exposed beaches to investigate the unusual sights of stranded fish and other marine creatures.

Where will the next M9 occur? No one knows, of course, but a major contender is the Cascadia subduction zone stretching from Vancouver Island in Canada to northern California. The most recent major earthquake and tsunami occurred in this zone on January 26, 1700; scientists rate the earthquake as a probable M8.7 to M9.2 and recognized tsunami damage in Japan. The return time for such an event is estimated at around 500 years, based on at least seven great earthquakes in the last 3,500 years, but seafloor core data for the past 10,000 years suggests the recurrence interval could be closer to 250 years. Sobering.

Disaster will probably strike along with the next great earthquake and tsunami, but at least now we are better prepared and know more about what to expect.

Photo of a village near the coast of Sumatra after the tsunami that struck South East Asia. U.S. Navy photo by Photographer’s Mate 2nd Class Philip A. McDaniel, Jan 2, 2005. https://en.wikipedia.org/wiki/2004_Indian_Ocean_earthquake_and_tsunami#/media/File:US_Navy_050102-N-9593M-040_A_village_near_the_coast_of_Sumatra_lays_in_ruin_after_the_Tsunami_that_struck_South_East_Asia.jpg