Erupting volcanoes are forming new real estate all around our planet. Beneath Iceland and Hawaii, surrounded by ocean waters, hot lava upwelling from deep underground is hardening into rock. Hotspots—rising plumes of molten mantle material that persist for millions of years—create volcanoes on these islands. Chains of volcanoes appear over a hotspot as a tectonic plate slowly crosses a mantle plume.

Iceland, however, is in a unique and vastly more complex situation. Besides the hotspot, another source of magma is also fueling volcanic eruptions. Iceland is located astride the Mid-Atlantic Ridge, which separates the North American and Eurasian tectonic plates. The result of these two circumstances? LOTS of lava! 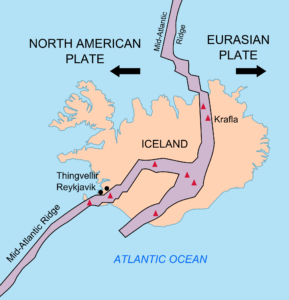 I’ve published several blog posts about these topics, including Hotspots and Hawaiian Islands and Iceland’s Volcanic Theater. Now, I’m intrigued by the interaction between the Iceland hotspot and the Mid-Atlantic Ridge. In a recent Volcano Café post, titled Icelantic: Growing A Nation, Albert provides excellent information. From a combination of what I’ve learned from Albert’s post and other sources, I summarize a version of these relationships, below. Note my deliberate statement of “a version”—although many scientists would agree, there is controversy about aspects of Iceland’s geologic setting. Time—and research funding—will eventually shed more light on the uncertainties.

You don’t have to search far to find a volcanic rock in Iceland, since that is the rock underlying the entire island. The oldest of these is only about 16 million years old—for a geologist, that is a very young age. Iceland has around 30 volcanic systems that have been active in the past approximately 12,000 years (Holocene). Thirteen of these systems have been the location of eruptions since 874, when people first settled on this island. Hundreds of eruptions have taken place in the past few millennia (check out the “List of volcanic eruptions in Iceland” page in Wikipedia). The deadliest was in 1783-84, when the craters of Laki erupted, resulting in changes in climate and other effects that killed roughly a quarter of the Icelandic population, and perhaps six million people globally. Scary. 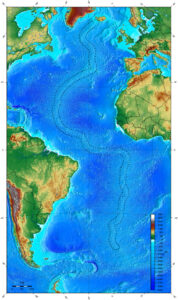 Notable eruptions in the current century include the dramatic lava flows on the Reykjanes Peninsula near Fagradalsfjall that began in March 2021 and continued intermittently in 2022. This eruption is tourist-friendly, occurring within about 20 miles (32 km) of the capital city of Reykjavík. A viewer can hike for a few miles and have a “ringside” seat of the action. (I’d love to visit Iceland again and watch an eruption in progress; hopefully that will eventually happen.)

In the spring of 2010, a distinctly unfriendly to tourists’ eruption occurred beneath Iceland’s Eyjafjallajökull ice cap. The caldera of a shield volcano (summit elevation 5,417 ft/1,651 m) is covered by the ice cap, and hot magma ascending through the ice ejected towering ash clouds high into the jet stream. The ash subsequently disrupted commercial jet traffic across much of Northern Europe. Some 20 countries closed their airspace for several days, resulting in trip disruptions for around 10 million travelers. (Fortunately, I wasn’t there then…)

Iceland is on the northern end of the Mid-Atlantic Ridge, across the spreading center or rift zone where upwelling lava is gradually separating the North American plate from the Eurasian Plate. Along most of the length of this spreading center, the newly cooled rock lies beneath the Atlantic Ocean. Why is the relatively large landmass of Iceland above the ocean water? The hotspot beneath has played an important role. This magma plume warms the crust, lowering the density of the rock and allowing it to rise above the ocean water. The warm rock also creates preferred pathways for Mid-Atlantic Ridge rifting in the crust. And over tens of millions of years, there has been a significant amount of new rock produced by volcanoes.

Together, the hot spot and the spreading center have created several roughly linear volcanic zones, as shown in the figure below. 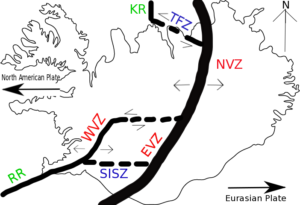 First, I’ll address the Iceland hotspot. Scientists consider these features to be stationary, but because tectonic plates are moving, the locations of eruptions from the hotspot will change. The greatest amount of volcanic activity today is in the East Volcanic Zone (EVZ on the map), which became active about 3 million years ago. Prior to about 3 million years ago, the West Volcanic Zone had the most activity. Based on this and other information, researchers can trace the path of the hotspot from the far northwest, claw-shaped side of Iceland about 15 million years ago along a southeast trajectory to where it is currently beneath the East Volvanic Zone in the central part of Iceland. (For more info, check out the text and maps in Icelantic: Growing a Nation.)

Second, we know that the Mid-Atlantic Ridge is also creating new lands in Iceland. These have formed in both the east and west directions because the spreading center is symmetrical. The position of the active rift, however, has also changed over time, literally “jumping” east, west, and then back to east again, locations on the island. The Reykjanes Ridge (RR on the map) is a part of the Mid-Atlantic Ridge that currently connects on land to the Reykjanes Peninsula. This peninsula has been quiet for nearly 800 years, but in recent decades there have been clues that the quiet period is ending. A bit ominously, the crust over the peninsula is bulging upwards from magma gathering below and increased earthquake activity is being recorded. These phenomena suggested an impending eruption—and then the Fagradalsfjall eruptions began on the Reykjanes Peninsula in 2021. 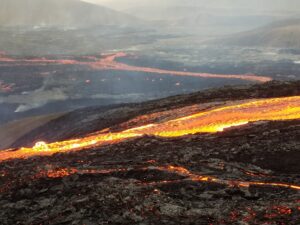 Lava flowing at Fagradalsfjall in Iceland on July 16, 2021 (Wikimedia)

Many scientists believe the mid-ocean ridge is causing the strings of fissures where lava has been oozing out at Fagradalsfjall. These may open because of a kink in the ridge, with the cracks forming between the two tectonic plates, which allow magma to accumulate and then erupt. Many also believe the eruptions are just the beginning of what could be decades or longer period of volcanic activity along the rift.

Additionally, the Fagradalsfjall activity suggests that the rift, now far to the west of the hotspot, may stay on the western side of Iceland. If we assume a gradual migration of the spreading center towards the west, Iceland will eventually leave the rift behind and be completely on the Eurasian plate. We can’t know for sure now, but once again, time will tell. It will be fascinating to see what happens next!

Wikipedia pages about the geology and volcanoes of Iceland.

Map of the Mid-Atlantic Ridge, 2006. https://commons.wikimedia.org/wiki/File:Mid-atlantic_ridge.jpg

Map showing the outline location of the major deformation zones in Iceland by Ronlau817, 2016. https://commons.wikimedia.org/wiki/File:Outline_of_Iceland_Deformation_Zones.png

Photo of lava flowing at Fagradalsfjall in Iceland on July 16, 2021, by Mokslo Sriuba. https://commons.wikimedia.org/wiki/File:Iceland%27s_Fagradalsfjall_volcano_lava.jpg