Did you know that an 1862 flood was the largest natural disaster in the history of California–and that this flood resulted in significantly more deaths and economic damage than the combined totals from recent major wildfires and earthquakes? In November 1861, heavy rain and snowfall at high elevations began and stayed for weeks in California. Then in December, while immense snowstorms and rainfalls continued, unseasonably warm temperatures melted the high snow load and triggered enormous floods. In early January flooding swept away towns, dams, mills, and livestock–and left many cities, including the capital city of Sacramento, underwater. And not just California was affected – floods occurred from the Columbia River in Washington, through Oregon, Nevada and into the territories that now compose Idaho, Arizona, and New Mexico. 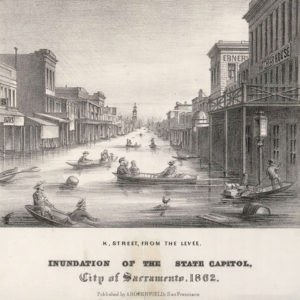 Lithograph of K Street in the city of Sacramento, California during the Great Flood of 1862. (Wikipedia)

Flooding that filled the Central Valley region of California to the point of becoming an inland sea, with water lapping from the Coast Ranges to the Sierra Nevada foothills, was part of Native American oral traditions. And that is exactly what happened in 1862. The entire Sacramento and San Joaquin valleys were inundated; in some areas, floodwaters reached depths of up to 30 feet (9.1 m). An area that may have been as large as 6,000 square miles (16,000 sq km) was flooded over a region about 300 miles long and 20 miles wide (480 km by 32 km). In many places, the floodwaters didn’t recede for months, creating soggy conditions that extended into the summer of 1862. Needless to say, the effects of this flooding were devastating.

The El Niño weather phenomenon is responsible for many floods along the Pacific coast of the Americas–but not the 1862 event nor, most likely, other enormous historical floods in California. Instead, researchers believe the 1862 culprit was an atmospheric river, the type that frequently brings rain to the region–and occasionally, enough moisture to cause substantial flooding. With a climate that is warming, flood hazards are rising – and with the Central Valley producing vast quantities of agricultural products for the country and the world, another major flood like that in 1862 could have catastrophic effects.

Rivers in the Sky

Atmospheric rivers are long columns of wind-borne water vapor carried from tropical latitudes northward. When these “rivers” of water extend over the land, they release the water as rain or snow, sometimes accompanied by high winds and extremely high levels of precipitation. The NOAA diagram below is informative. 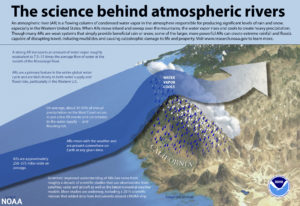 An atmospheric river was responsible for an uncommonly early major storm in the San Francisco Bay Area on October 24 -25, 2021. A low-pressure system offshore from California set the stage for heavy rains that lasted for over 24 hours in some areas. At high elevations, over 12 inches (30 cm) of rain fell, accompanied by winds between 50 to 60 mph (80 to 97 km/hr) and gusts up to 80 mph (129 km/hr). In the lower elevation regions, 5 to 10 inches (13 to 25 cm) of rain fell and there were also high winds, causing flooding, downed trees, and power lines, and flows of mud and organic debris.

Following several years of drought, and with the new water year beginning on October 1, rainfall in the Bay Area is now at an impressive 500 percent of normal. Heavy rains are unusual in October, so this high percentage value is expected to fall dramatically — and ending the extended drought will take much more rain and snow. Hopefully, this precipitation will be distributed evenly over several winter months. We will find out soon enough! 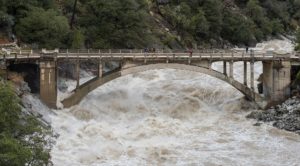 Hints of What Could be Ahead

The Great Flood of 1862 resulted in an astounding $262.2 billion in damages (2020 USD) and the deaths of over 5,000 people. The impact on livestock was shocking, with an estimated 200,000 cattle, 100,000 sheep and 500,000 lambs killed by the floodwaters or starvation. About one-fourth of the taxable real estate in California was destroyed, driving the state to the edge of bankruptcy.

Natural disasters can be just that – disastrous. In 2005, Hurricane Katrina did an estimated $125 billion in damages with 1,836 lives lost; in Hurricane Harvey in 2017, the damage costs were also $125 billion, with 107 dead. California, despite its reputation as a sunny paradise, has experienced many natural disasters. These have ranged from the wildfires of the past few years (damage cost of 2018 wildfires > $26 billion/97 deaths) to large earthquakes (1989 Loma Prieta earthquake in the San Francisco Bay Area at $6 billion damage/69 deaths). The combined destruction from California disasters in recent decades is a fraction of what happened in 1862, providing an indication of the appalling magnitude of the Great Flood of 1862. (Data source: List of natural disasters in the United States – Wikipedia )

Also, in what is surprising–and frightening: Geologic evidence shows that floods of equal or greater magnitude have occurred in California roughly every 100 to 200 years. In just the past few centuries, massive floods that submerged large portions of the state occurred in 1418, 1605, 1750 and 1810–and then 1862. Yikes!

What has changed in California in the 160 years since the Great Flood of 1862? First, the population of the Central Valley has increased tremendously, with urban development in the communities of Sacramento, Modesto, Fresno, Bakersfield, and many more sprawling outwards onto prime agricultural land. Second, the Central Valley now produces an astonishing amount of food–including nearly half of all US-grown fruits, vegetables, and nuts. From almonds, pistachios, walnuts, and other nuts; to broccoli, artichokes, carrots, celery, spinach, and other vegetables; to fruit trees of apricots, peaches, plums, lemons, and tangerines; to vast amounts of dairy products and beef, over 400 food commodities are produced in California. Water scarcity from droughts is definitely a threat to the population and this intensive agricultural production–but so also is the possibility of major flooding,

A repeat of a flood that even approaches the magnitude of the Great Flood of 1862 could be an unprecedented catastrophe.

Most people know that wildfire and earthquake risks are high in California. I am keenly aware of those, but for many years, I didn’t recognize major flooding hazards as much of a concern. I do now. I’ll share more details about flooding in future posts.

NOAA, 2017, What are Atmospheric Rivers? https://www.noaa.gov/stories/what-are-atmospheric-rivers

Lithograph of K Street in the city of Sacramento, California during the Great Flood of 1862, unknown (published by A. Rosenfield (San Francisco)  https://commons.wikimedia.org/wiki/File:K_Street,_Inundation_of_the_State_Capitol,_City_of_Sacramento,_1862.jpg