When I hiked to Machu Picchu along trails built by the Incas in the Andes Mountains, I was traveling on what was once part of the largest monumental system ever built in the ancient world – an incredible 25,000 mile network of roads and trails. Known as Qhapaq Ñan, the Royal Road, or the Great Inca Road, the system connected the vast territory of the Inca Empire. From the sand dunes of the Pacific Coast, across snow-covered passes as high as 16,000 feet high, and into rainforest jungles above the Amazon Basin, the roads tied together more than 1,200,000 square miles of an extremely diverse geographic region. Today, these ancient routes can be traced across much of modern Ecuador, Peru, Bolivia, northern Chile and northwestern Argentina. 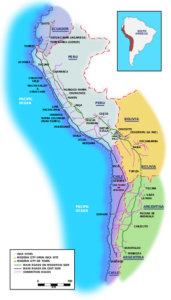 There were two major north-south roads — one through the arid coastal plain close to the Pacific Ocean, and the other along the spine of the Andes Mountains – and numerous east-west connecting roads. The roads allowed the movement of people, materials and resources, and information throughout the empire. Llama caravans, sometimes with thousands of animals, carried food and trade items. Armies moved rapidly, quelling local rebellions or expanding imperial boundaries. Relay runners provided an effective means of communication, carrying verbal messages and lightweight goods. Trails led to shrines used for religious rituals, with some routes to high mountaintops where priests would conduct human sacrifices to appease important deities (described in my blog: Mountaintop Shrines and Sacrifices).

The Inca Road served as both a physical and conceptual link that unified the Inca heartland in the capital of Cuzco with the most remote corners of the realm. The symbolic nature of the road system was extremely important; the roads were intended to impress all citizens with the power and might of the Inca Empire. The elaborate design of many roads went far beyond what was needed for practical travel, with some sections up to 60 feet wide (about the size of 5-lane highways).

Change came when the Spanish conquistador Francisco Pizzaro marched into the high Andes in 1532, triggering the collapse of the Inca Empire. In a twist of fate, the Inca road network provided the Spanish conquerors with access to unimaginable wealth. The invaders rapidly and ruthlessly consolidated their occupation — establishing a Spanish administration system; exploiting the indigenous labor force; and gaining access to gold, silver and other valuable resources. One small irony that I appreciate: the horses of the conquistadors, raised on the open grasslands of Spain, wisely resisted walking on the steep stairways and across the narrow swinging bridges of the Inca roads. The Spanish must have experienced frustrating delays in their rush to dominate the new lands. 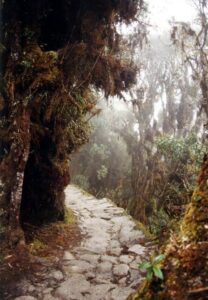 Over the centuries following the Spanish conquest, much of the Inca road system was destroyed. Then, midway through the 20th century, Peruvian authorities restored and opened many miles of trails to promote the Central Andes as a global trekking destination. Today, the region provides opportunities for some of the best hiking and mountaineering in the world. And while appreciating the engineering skill required to construct this impressive road network, one can also simply admire the smooth rock slabs underfoot, polished by untold millions of ancient footsteps.