Geysers in the Americas

Geysers in the Americas

Geysers, with hot water and steam welling up from deep underground, are mysterious clues to what lies beneath. Yellowstone National Park includes about half of all geysers found on Earth. The Andes Mountains contain a major geyser field, named El Tatio, in northern Chile.  A 30 square mile area called The Geysers, is located about 70 miles north of San Francisco, although it doesn’t actually contain geysers (more about that, below). After writing about Yellowstone in a recent blog post (check it out here: https://roseannechambers.com/yellowstones-dynamic-geologic-history/ ) I dug around for more information about geysers – and I found some that was new news to me and, I think, quite interesting.

To start, I was surprised to learn there are only a half dozen large geyser fields on our planet. Check out this map: 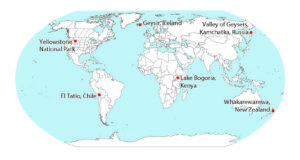 Several conditions are required to create geysers — and clearly this set of conditions is relatively rare. Geysers require a large underground heat source, provided by a recently active volcanic system.  Next, a source of water is needed, and then rocks with abundant fracture networks, which allow water and steam to move upwards. Geysers are fragile and transient features, with intervals of activity or dormancy influenced by earthquakes that can modify rock fracture patterns, and by water availability.

Chemical sediment deposits, known as siliceous sinter or geyserite, create spectacular landforms around geothermal features, including mounds, cones, and terraced pools. Algae, bacteria and fungi color the sinter with orange-brown to greenish hues and also are the source of the silica that forms the sinter deposits. 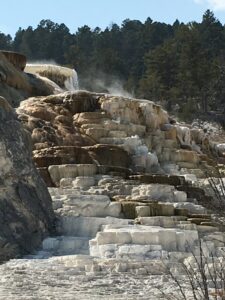 The geysers in Yellowstone are exceptional in terms of geyser sizes and the high concentration of more than 10,000 thermal features. Old Faithful, the most famous geyser in Yellowstone, was named by a group of explorers in 1870. It erupts approximately every 60 to 90 minutes. Except when it doesn’t. New evidence indicates this geyser was inactive during a time of drought roughly 725 years ago, dated to between 1230 to 1360 CE. What evidence could scientists possibly use to indicate ancient and ephemeral geyser activity? Turns out, lodgepole pines, which were once growing on the geyser mound. Amazingly, more than 700 year old wood has been preserved over the centuries by opal deposits from the silica-rich thermal waters that eventually began to erupt from Old Faithful.  It is a good story, published on the USGS website by the Yellowstone Volcano Observatory; check it out here: https://www.usgs.gov/center-news/a-time-when-old-faithful-wasn-t-so-faithful?qt-news_science_products=4#qt-news_science_products

In northern California, molten material underlies The Geysers, in the Mayacamas Mountains of Sonoma and Lake Counties. This area is interesting despite not containing geysers, since it is reportedly the largest and most developed geothermal field on our planet. (It also rates because it is in my California neighborhood!). The Geysers is actually a dry steam field, producing superheated steam in fumaroles. A magma pool remains from when volcanoes began erupting in this region about 2 million years ago, although no volcanic eruptions have occurred in the past 10,000 years. A residual magma chamber, about 2 miles beneath the surface, is heating the fractured rock and water. The steam is kept under pressure by a capping rock of serpentinite, a common component of the Franciscan Complex rocks in this region.

The Andes Mountains contain many active volcanoes, found today in three distinct zones along the 4,000 mile extent of this mountain range. (The areas separating the three volcanic zones do not have any recent volcanism – instead, these areas are characterized by frequent earthquakes — fascinating, IMO!) Conditions optimal for geysers exist at El Tatio in northern Chile near the border of Bolivia, at an elevation of about 14,170 feet above sea level. Various terms, including “oven” and “burnt” are possible translations of “tatio”, from the ancient language of Kunza once used by people in the Atacama Desert. This geothermal field contains fumaroles, hot springs, mud volcanoes, and steam vents in an area about 12 square miles in size.  The El Tatio field is along the western foot of a series of active volcanoes in the Central Volcanic Zone.  (This is the same zone that extends into Peru, and where the Incas conducted rituals and sacrifices on the tops of high volcanoes, described in my blog post here https://roseannechambers.com/mountaintop-shrines-and-sacrifices/) 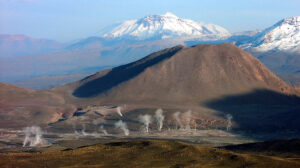 Geysers typically contain populations of microorganisms that flourish in the extremely hot and chemical-rich water, which can include toxic chemicals such as arsenic. These organisms are studied as possible analogs for how life began to be established on Earth, as well as the possibility that life existed in the past on Mars.  The high elevation of El Tatio also exposes life forms to a large amount of harmful ultraviolet radiation, an environmental condition to which early life on Earth had to adjust (many other species may also have to adapt, as the protective ozone layer is increasingly being reduced by human activity …. but I digress…).

Many geothermal sites are tourism destinations, where viewing geysers and bathing in the hot water become important economic resources. Clashes between those who want to develop geothermal power extraction projects and those concerned with environmental issues develop. Geothermal power projects in several countries have altered geyser behavior and even resulted in the extinction of geysers. Messing with nature can lead to unfortunate outcomes! 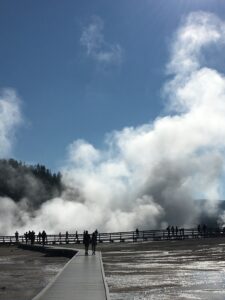 El Tatio geysers as seen in the morning from Cerro Soquete by Albert Backer, 2004: https://commons.wikimedia.org/wiki/File:ElTatio-CerroSoquete-2004.jpg

Yellowstone photos from my 2018 trip