When Alex Honnold climbed El Capitan, the 3,200 foot high sheer rock face in Yosemite on June 3, 2017 – alone, and without any equipment for fall protection — it was an epic feat that took incredible strength, agility, bravery and focus. The movie “Free Solo” about Alex’s climb has won numerous awards, including an Academy Award for Best Documentary Feature. And I think the granitic rock of El Capitan deserves recognition as “Best Supporting Rock”. Let me tell you why. 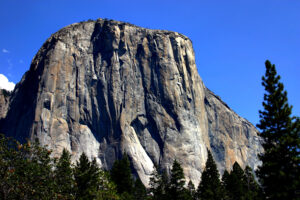 The massive wall of El Capitan is composed of igneous rock. But not the extrusive kind of igneous rock, originating from magma that boils up and erupts in a volcano. Granite is an intrusive, or plutonic, rock from magma that slowly cooled and solidified deep underground. (The term “plutonic” is associated with Pluto, the ancient Greek mythical ruler of the underworld.) Granites are the most common plutonic rocks found on the continents, and they contain the two most common minerals found there: quartz and feldspar. Many mountain ranges, including the Sierra Nevada in California and the Andes Mountains in South America, are underlain by granitic rocks that were uplifted and exposed as mountains.

The massive “big walls” of granite composing El Capitan and Half Dome have made Yosemite Valley one of the premier rock climbing destinations in the world. The strength, steepness, cracks and friction of granite contribute to make it a superb rock for climbing. Granites are very strong and hard, so they can form huge vertical sheer faces like “Freerider” — the difficult route Alex Honnold chose to scale El Capitan. Numerous joints, or thin cracks or fractures, form in granite during uplift and exposure to wind and water. Many of the pitches on established climbing routes on El Capitan follow cracks. These allow more secure hand or foot jams for climbers and provide a welcome change from pitches across smooth faces.

Granites have tightly packed crystals, with crystal size controlled by the cooling process. Large crystals form from slow cooling deep underground, and smaller ones from faster cooling. The crystal sizes in El Capitan are optimal for climbing – not too big and sharp (hard on hands) or too small. They provide just enough friction to allow subtle finger and toe holds. 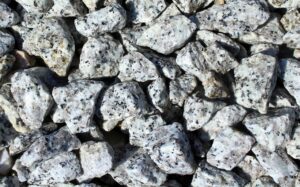 Granite is notable for many other useful qualities. Granite cracks can create “natural quarries” of conveniently pre-formed blocks for construction, highly beneficial to the ancient builders of Machu Picchu. Cracks can also fill with quartz minerals and gold. In both California and the Andes Mountains, gold deposits in granites changed the trajectory of human history. (These are fascinating stories – I’ll get to them later). In our time in the 21st century, the free solo climb of Alex Honnold and the granite of El Capitan combined their strengths to accomplish what may be the greatest feat of pure rock climbing in history.