Jutting up from the middle of the Pacific Ocean, the Hawaiian Islands are located more than 1,800 miles from the nearest continent. They are also in the center of the Pacific tectonic plate, so the volcanoes that formed these islands have a completely different geologic history from other volcanoes around the Pacific Rim.  Kilauea, on the Big Island of Hawaii, is ranked as the highest risk volcano in the United States. 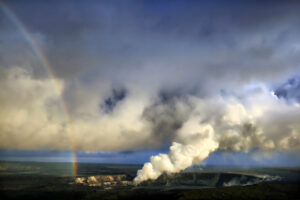 The Pacific Rim of Fire that encircles the Pacific Ocean is the location of more than 75% of the Earth’s active and dormant volcanoes. These volcanoes are associated with colliding tectonic plates where the oceanic crust of the Pacific plate is being subducted beneath continental plates. The Hawaiian volcanoes are forming because of a hotspot: a plume of hot material rising from the Earth’s mantle. As plates move over hotspots, a string of volcanoes often form. Most hotspots, like the Hawaii hotspot, are located far from any plate boundaries, but others are close to or directly on a plate boundary. The latter include Iceland, which is astride the spreading center of the Mid-Atlantic Ridge that separates the North American and European tectonic plates. Hotspots are complicated.

The Hawaiian Islands are part of the Hawaiian-Emperor seamount chain. This line of mostly undersea volcanoes extends for almost 4,000 miles from the youngest of the Hawaiian Islands northward to close to the western end of the Aleutian Islands near the Alaska/Russia border. There are at least 129 volcanoes in this chain. The vast majority are seamounts, the tall geographic features that are usually formed by volcanoes and are completely underwater. The oldest seamount in the chain has been dated at 85 MY and will likely be subducted under the Eurasian plate a few million years in the future. Older seamounts in the chain have probably already been pulled down into the mantle at this plate margin, but the direct evidence has vanished.

The Hawaii hotspot is roughly 350 miles wide, with the actively flowing region about half that width. Data indicate this hotspot is caused by a plume that originates in the lower mantle, close to the core-mantle boundary, which is at a depth of about 1,800 miles below the surface of the Earth. The high heat of hotspot plumes melts the base of the crust, the outermost layer of the Earth, producing magma that moves up to the surface and is erupted as lava.

Scientists originally thought that hotspots were fixed in their locations, thereby providing a convenient frame of reference for the motion of tectonic plates. For decades, the 60 degree change near the middle of the track of the Hawaiian-Emperor chain was a textbook example of a shift in the motion of the Pacific plate. No longer. Recent research has revised this model, as data indicate that some hotspots actually move around; also, the rate at which they move can change through time. The Hawaiian hotspot apparently drifted southward between about 85 and 57 million years ago, then this motion slowed and possibly stopped. The prominent bend between the Emperor and Hawaiian segments of the chain reflects this change in movement, which in turn indicates a major adjustment in mantle dynamics.

The oldest volcanoes in the Emperor segment each formed over an interval of many millions of years and are about 100 miles apart; recently, the Hawaiian Islands are forming with relatively close spacing. Over the past 6 million years there is evidence that lava flow rates have been increasing, with an even greater volume increase in the past 1 million years. Each of these younger volcanoes has apparently been spending less time actively attached to the plume, suggesting that the hotspot’s velocity is increasing. 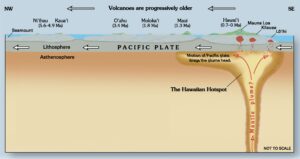 Volcanic Activity in the Hawaiian Islands

Active volcanoes are found only in the southernmost part of the Hawaiian Islands. The oldest islands are on the northern end of the string and the islands progressively decrease in age towards the southernmost and youngest, the Big Island of Hawaii. The Big Island is composed of 5 separate volcanoes. Hawaiian volcanoes reach the greatest heights and levels of activity at around 500,000 years old, then gradually become dormant and then extinct. On the far north side of the island, Kohala, Mauna Kea and Hualalai volcanoes began erupting around 1 million years ago and are now considered inactive. Mauna Kea is the highest mountain in the state of Hawaii. At 13,803 feet above sea level and 33,500 ft above the ocean floor, it is also considered the tallest mountain on Earth. 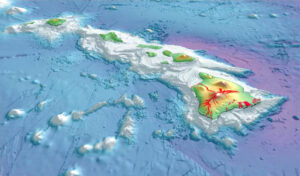 Mauna Loa, covering about one half of the Big Island of Hawaii, is the largest volcano on Earth. It emerged from the sea about 400,000 years ago and has probably been erupting for at least 700,000 years. Mauna Loa has erupted repeatedly in the past few centuries but has been quiet since 1984. As of late May 2020, however, numerous small-magnitude earthquakes are being recorded on the summit and upper elevations of the volcano. The summit is also slowly expanding outward, indicating an increase in magma moving into Mauna Loa’s shallow storage system.

Interestingly, in 1936 the US Army dropped bombs on lava flows from Mauna Loa heading towards the city of Hilo on the east side of the island. Whether or not this effort was actually successful in diverting the flows is controversial, but the flows did stop shortly after the bombing. When a new lava flow in 1942 threatened the water supply of a town, another series of bombs was dropped to try to redirect the lava flows. This operation reportedly had little effect, but eventually the eruption stopped. (Efforts to control lava flows are fascinating to me [e.g., the Iceland example described by John McPhee in The Control of Nature]; if you know of other examples please let me know.)

Kilauea is the youngest volcano on the Big Island and may currently be the most active volcano on Earth. It appears to be only a bulge on the southeast flank of Mauna Loa, but it has lavas with a different chemical composition and a separate magma-plumbing system. It erupted almost continuously from 1983 to 2018, causing extensive damage to communities in the path of the lava. A large eruption in 2018 produced lava that flowed out into the ocean, adding a mile or so of new real estate to the island.

In 2016 I had the pleasure of witnessing fiery lava pouring into the ocean during an eruption of Kilauea. As our boat was maneuvered ever closer to a glowing fountain, frequently obscured by clouds of smoke and steam, hot blobs of lava were ejected out over the water and toward the boat. The baseball-sized lumps rained onto the metal roof of our vessel and hit the water around us, where they skated for a distance over the surface accompanied by a peculiar sizzling sound. (Imagine tossing the red-hot charcoal briquettes from a barbecue into a swimming pool, then having the coals float.) Watching an active lava flow was a memorable experience!

Loihi is the youngest in the Hawaiian Island chain. Currently it is a seamount that is an active volcano south of Kilauea and about 19 miles from the shoreline of the Big Island. Loihi began forming about 400,000 years ago. The top of the seamount is currently approximately 10,000 feet above the seafloor and covered by about 3,200 feet of ocean water. Sometime in the next few tens of thousands of years from now, Loihi will emerge as a new island. Numerous earthquake swarms have been recorded near Loihi since 1952. These have involved thousands of earthquakes with sizes ranging up to magnitude 4.9. After a particularly intense swarm ended in 1996, undersea expeditions showed that a large crater had formed in the volcano’s summit area, and there was evidence of newly erupted lava.

A new earthquake swarm began near Loihi in mid-May 2020, with some earthquakes of magnitude 3 and larger. These earthquakes probably indicate movement of magma in the volcano. Most are currently a few miles deep, but if these events become shallower they could signal the beginning of a submarine eruption.

The US Geological Survey’s Hawaiian Volcano Observatory has the mission of monitoring and assessing hazards from active volcanoes and earthquakes in Hawaii. Thousands of small earthquakes occur beneath and close to the Big Island every year. Most of these are too small to be felt, but large earthquakes are also possible. One highly destructive earthquake with an estimated magnitude of 7.9 was recorded in 1868.  A tsunami up to 60 feet high was triggered and a large landslide occurred on Mauna Loa; a total of 77 people died.

Hawaiian volcanoes typically produce slow flowing and runny basaltic lava. They are less explosive than volcanoes in subduction zones, such as the Cascades in the Pacific Northwest and the Andes Mountains in South America. In those mountain ranges, the hot magma moving upwards through quartz-rich continental crust melts and then mixes abundant silica into the magma, creating a viscous mix that traps gases and can become quite explosive. Eruptions of the Hawaiian volcanoes rarely produce casualties, but they can cause extensive property damage.

The greatest hazards from Hawaiian volcanoes are underwater slumps and landslides that trigger tsunamis. Surveys have revealed numerous scars from these landslides along undersea slopes in the Hawaiian chain. Many of the landslides were quite large, with dozens over 10 miles long and a few over 100 miles long. Massive tsunamis have resulted, leaving marine deposits high up on the slopes of many Hawaiian volcanoes. Hopefully, another catastrophic event will not occur for at least another few thousand years, but no one really knows.

The earth is like a spaceship that didn’t come with an operating manual.

Eruptions from the Hawaii hotspot left a trail of underwater mountains across the Pacific over millions of years, called the Emperor Seamounts http://www.ngdc.noaa.gov/mgg/image/2minrelief.html