On the evening of Dec 20, 2020, an eerie orange glow appeared on the infrared monitoring cameras on the summit of Kilauea volcano in Hawai’i Volcanoes National Park. The glow grew larger and larger, marking the beginning of a new volcanic eruption. Lava began pouring out from three fissures in the small summit crater, Halema’uma’u, deep within the greater Kilauea crater.  A large steam cloud developed as the hot lava hit the lake water in the crater and the water began to boil. Liquid lava began filling the depression, creating a lava lake that has been steadily rising. A large island of cool and solidified lava commenced floating around the lake, the top surface of the island extending an estimated 20 feet above the lake surface. At the bottom of the lake, accumulating lava began to solidify. One week after the eruption began, the lava lake had an estimated depth of 580 feet, and by early January it had reached around 630 feet deep. 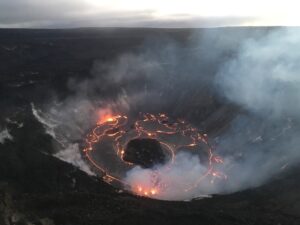 The USGS Hawaiian Volcano Observatory has been closely monitoring this latest eruption of Kilauea. The lake level is more than 1,000 feet below the Halema’uma’u crater rim and so far there is plenty of room in the caldera to contain the oozing lava. For the local populations, elevated sulfur dioxide and carbon dioxide emissions are among the inherent eruption dangers. The sulfur dioxide reacts with sunlight, moisture and other gases to produce fine particles that form a volcanic fog, known as vog, which creates health hazards for people and livestock, and damages agricultural crops.  Other hazards include explosions that can occur without warning and threads of volcanic glass – called “Pele’s hair”, after the volcano goddess – that fall downwind and can cause skin and eye irritation.

Since 2018 the volcano has displayed a low level of unrest. Beginning in March 2019, the summit began to steadily inflate and bulge outward, most likely from a magma supply collecting in the shallow subsurface. The uplift rates were amplified beginning in September 2020.  In late November, shallow, small-magnitude earthquakes around Kilauea’s summit began to increase in frequency. Still, the abrupt beginning of the new eruption took many scientists by surprise.

Kilauea might be the most active volcano on our planet. Located on the southeastern slope of the enormous Mauna Loa volcano, which is also active, Kilauea has a separate magma-plumbing system and produces lavas with a different chemical composition. The Hawaiian island chain has a fascinating geologic history that I’ve written about in a recent post, here: https://roseannechambers.com/hotspots-and-hawaiian-islands/

The eruption record of Kilauea during the past 2,500 years has been reconstructed based on information from young volcanic rocks that cover nearly the entire surface of this volcano. This history includes long periods of explosive eruptions that alternate with effusive eruption phases. The explosive phases are dominated by volcanic rock and ash hurled violently high into the air; the effusive activity is much quieter and dominated by slow lava flows. 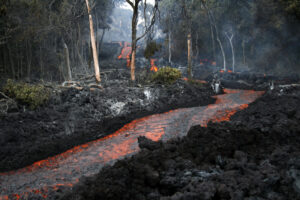 Stream of lava from Kilauea volcano flowing through the forest in the Royal Gardens subdivision, February 28, 2008. The lava stream is about 3 m (10 ft) wide.

The most explosive events shown in the eruption record occurred between about 850 and 950 CE. In that phase, rocks weighing up to 10 pounds were launched to distances of 3 miles from the summit, and golf-ball-sized rocks fell at the coast about 11 miles distant. Had a beach party been underway, this could have caused alarm, but fortunately humans had not yet arrived on the island. A few hundred years later when the first Polynesians reached Hawaii in the early 13th century, Kilauea’s dramatic explosive activity had been replaced by the current phase of primarily effusive eruptions. These slow-moving lava types have continued for the past 1,000 years.

Although major explosive eruptions had become rare, the earliest Hawaiian people could still witness exciting geology in action. The enormous Kilauea caldera present today developed after major lava flow eruptions that finally ended around 550 years ago, after continuing for about 60 years. After the magma reservoir that had held all this lava deep underground had been drained by the eruptions, the overlying ground surface collapsed into the void, creating a caldera around 2,000 feet deep and with a diameter of over 2 miles. Ancient Hawaiian chants describe the caldera formation, attributing it to the digging of a deep structure by Hi’iaka, a sister of the volcano deity Pele. 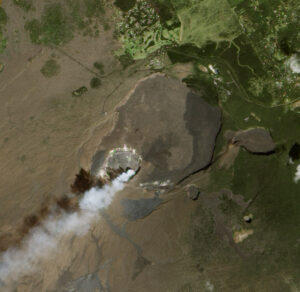 Satellite picture of Kilauea Crater and smaller Halema‘uma‘u Crater with plume from a vent, NASA image taken in January 2012

In recent centuries, the summit of Kilauea has experienced a series of caldera fillings alternating with collapses. The almost continuous 1983 to 2018 eruptive sequence along the volcano’s east flank ended with a summit collapse that roughly doubled the size of the Halema’uma’u crater and deepened it significantly. From May to August 2018, 62 collapse events were recorded in the crater, each accompanied by 10 feet or more subsidence and slumping of caldera rock, explosions, and energy releases equivalent to magnitude 5.2 to 5.4 earthquakes. Exciting! Eventually, these collapses deepened some areas of the crater by more than 1,600 feet.  The summit subsidence ceased in August 2018, corresponding with a significant decrease in eruptive activity.

Kilauea is definitely a volcano worth watching. And although the pattern of effusive eruptions is continuing, scientists expect that the volcano will eventually return to a phase dominated by explosive activity – timing unknown. That promises to be a dramatic show! 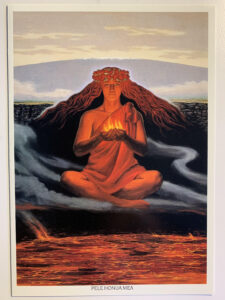 For information about the current status of Kilauea, you can learn more here: https://www.usgs.gov/volcanoes/kilauea/volcano-updates

Photo of stream of lava from Pu‘u ‘Ō‘ō flowing through the forest in the Royal Gardens subdivision, February 28, 2008.  Kīlauea Volcano, Hawai‘i.  https://www.usgs.gov/media/images/stream-lava-pu-u-flowing-through-forest-roy