Did you know that traces of the Pleistocene “Ice Ages” can be found north of San Francisco on the Sonoma County coast? There is a “mammoth” finding hidden in clear view there. But before I share that story, let’s get a glimpse of the coastal scene in northern California a few tens of thousands of years ago. It was quite different from what we see today.

“Ice Ages”, of course, brings up images of a cold and icy world. And at times during the Pleistocene, which commenced about 2.6 million years ago, it was very cold — with roughly 3 times more ice present on the planet than today (most was in the Northern Hemisphere).  Continental ice sheets that could be more than two miles thick and extend over tens of thousands of square miles, along with large glaciers at high elevations, expanded during a series of cold glacial periods and then diminished during warmer inter-glacial periods.  Eventually the last major glaciation ended and  the Earth warmed. The Pleistocene was officially over by about 11,700 years ago, marking the beginning of our current (and rapidly warming) epoch, the Holocene.

The Pleistocene is famous for exceedingly large mammals and birds — including many bizarre types that are no longer with us. Called megafauna, a term commonly used for animals bigger than humans, large body size is correlated with cold climates. The evolution of a big body gives animals advantages in regulating their temperature, as well as an improved ability to cope with changes in their seasonal food supply. Among the most notable of the Pleistocene megafauna were mammoths, shaggy woolly icons that have been the subject of artistic renderings from rock art thousands of years old to the recent “Ice Age” animated films (which unfortunately confuse young viewers by glossing over the fact that tens of millions of years separated mammoths from dinosaurs…. argh.) 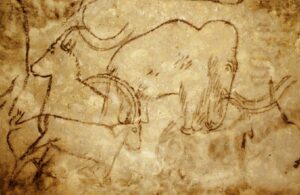 The California coastline looked very different during the Pleistocene. Although it wasn’t covered by ice, as were the mountains of the Sierra Nevada to the east that were being carved by glaciers, sea level was much lower than today. Tremendous amounts of water were trapped in ice during the coldest glacial periods and sea level fell dramatically, dropping 300 feet or more worldwide. Along the Sonoma County coastline roughly 20,000 years ago, Pacific waves were breaking onto beaches 15 to 20 miles west of the shoreline today, beyond the Farallon Islands. 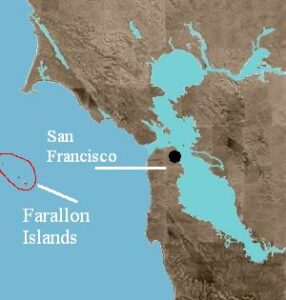 A vast grassland plain once occupied the area of the Sonoma coast that is now mostly submerged by the ocean. Herds of large mammals, including mammoths, mastodons, camels, horses, llamas, elk, bison, and moose – all grazing herbivores — darkened this plain. Keeping a sharp eye on these “meals on the hoof” were large predators including dire wolves, California lions, and saber-tooth cats (among my personal favorites – but that’s another story). The fossil bones and teeth of many of these animals, including the huge mammoths, have been found in Sonoma and Marin counties.  Other signs of the gigantic creatures that once roamed the region can also be found today. Tune in again for the next post!

Paleolithic cave painting of mammoth and ibex in the Grotte de Rouffignac, France