Maize (aka corn) was considered a sacred plant by the Inca, Tiwanaku, Moche and many other ancient Andean cultures. In the Andes Mountains, for millennia the principal use of this plant has been to make an alcoholic beverage called chicha. This beverage was so important to the social and economic functioning of ancient Andean societies that when there was a major disruption in the flow of maize, it helped to trigger the collapse of at least one society that had flourished for hundreds of years. 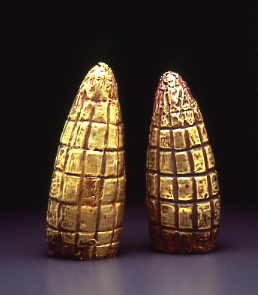 Maize was domesticated in south-central Mexico roughly 9,000 years ago and then dispersed in the Americas over the next few thousand years. Botanically, it is an annual grass in the family Gramineae (Zea mays). The wild plant from which it was domesticated, known as teosinte, had a bush-like form and a single very small cob. Over time, artificial selection led to tall plants capable of producing several large cobs. (The name corn is a loosely defined term that can refer to any cereal crop, although it primarily means maize in the US and Canada.)

Domesticated maize has been found at Andean archaeological sites extending back about 6,000 years. The plant appears to have been a minor crop for at least the first few thousand years in this history. Eventually, the valuable attributes of this plant were realized and production was greatly expanded. Increased consumption may have been possible only after the ancient Andeans began to build more extensive irrigation systems around 3,000 years ago, since this high sugar-content plant requires abundant water to flourish. A nutritious food that can be stored well, maize became valuable for trading and gift exchanges. 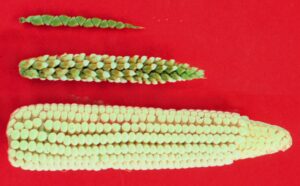 Teosinte on top, maize on bottom and a hybrid of the two in the middle

Maize was fermented to make the important ceremonial and ritual beverage called chicha beginning more than 2,000 years ago. Chicha was traditionally produced by placing dried ground corn in the mouth and chewing to mix it with saliva, which begins the process of breaking down starches into sugar. The corn and saliva balls were then spit into large ceramic jars for fermentation. Ceramic vessels used for chicha brewing and serving, some in enormous sizes, are found in the temple complexes of many Andean archaeological sites.

Chicha continues to be available in Andean countries today. During my first trip to Peru, while we were in the Sacred Valley area near Cusco, one brave man in our hiking group sampled the local version. He promptly became unpleasantly ill and did not recover for several days, although most likely the water in the mix was the offender and not the fermented corn. Bottled beer was a much safer bet, so it became an (even more) obvious beverage choice for others in our group thereafter.

Maize and the Tiwanaku Culture

Maize played a prominent role in the Tiwanaku culture that flourished south of Lake Titicaca between about 500 and 1100 CE. In the capital city of Tiwanaku, now in Bolivia, chicha became an important part of the political economy, as the beverage was produced in massive quantities and served in the frequent elite-sponsored feasts for the masses. Since the high altitude chill of the Altiplano homeland of the Tiwanaku people is not suitable for growing maize, satellite settlements at lower elevations became dedicated maize production regions. Llama caravans with loads of maize headed uphill to the Tiwanaku capital, and then returned to the agricultural outposts with potatoes, tools and other supplies from the heartland.

The most important maize producing colony for Tiwanaku was in the Moquegua Valley, now in southern Peru, where a violent uprising by the local population around 1000 CE led to systematic burning and destruction of structures associated with the distant capital city. Although the reasons for this are not completely clear, there is archaeological evidence that control of the distribution of agricultural products was a factor. Possibly, the hardworking farmers in this area began to begrudge sending the fruits of their labor to the capital city, and decided to control it for their own benefit.

Back in the city of Tiwanaku, living conditions had apparently been deteriorating and various groups of the population were abandoning the city and moving out into other parts of the region. Then, after the riots in the Moquegua Valley disrupted the maize supply, the chicha available for feasts in Tiwanaku became severely restricted. This appears to have been a factor in the ensuing uprisings in the capital city, in which elite residences, megalithic monuments, and sculptures were defaced and destroyed. The authority of the Tiwanaku elites had been destabilized, at least in part, by their inability to provide an essential beverage. It took a few more decades, but eventually the Tiwanaku culture collapsed. (Centuries earlier, the Roman experiment with “bread and circuses” didn’t end well either, but that news had not reached the Andes.)

Maize and the Inca Empire

When the power of the Incas spread throughout the Andes in the 15th century, maize again achieved great social and ritual significance. Many of the Incan conquests were focused on warm valleys where maize could grow well. When these new territories were brought into the empire, vast fields and irrigations systems were rapidly set up to cultivate maize. 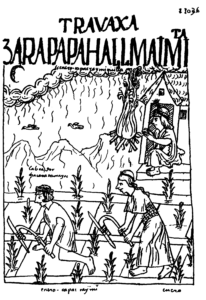 “Maize, time of rain and digging up the earth” by Guamán Poma, 1615

Inti, the Inca god of the Sun, was closely linked to the growth of maize. In a shrine to Inti in the Coriconcha, the most sacred temple in Inca Cuzco, a ceremonial garden was adorned with life-sized, gold-covered sculptures of maize plants that were displayed in the annual festivals that marked the sowing and harvest times for maize. (Sadly, shortly after the arrival of the Spanish, virtually all these sculptures were melted down and shipped away to Spain.)

Maize was considered the food of the gods, so by extension it was a major food of Inca royalty. The Inca nobility ate more maize and llama meat than commoners, who subsisted primarily on potatoes, greens, and an occasional guinea pig that was underfoot. In the Inca capital of Cusco, a group of “chosen women” were responsible for the task of producing the vast quantities of chicha used in important social and ceremonial gatherings.

Chicha was used frequently as an offering to the gods and was given in quantity to people who were about to become sacrifice victims. The beverage was consumed in enormous amounts at public festivals and feasts, which sometimes could last for days and even weeks. Drinking large amounts of chicha was a ritualized form of worship believed to honor the Andean deities. Spanish observers of multiday Inca festivals held during early Colonial times were reportedly aghast at the public drunkenness with chicha, not understanding the ties to religious practices.

Following the voyages of Christopher Columbus and the connection of the Old World with the New World, maize became part of the “Columbian exchange” – the post-1492 radical transformation of our planet resulting from biological and cultural transfers. Maize, along with the potato, tomato, avocado, tobacco, peanut, and numerous other plants that are indigenous to the Americas, were introduced first to Europe, and subsequently to Africa, and Asia.

Today maize is a staple food in many parts of the world and total global production of the many varieties of this plant surpasses that of wheat or rice. The crop has hundreds of uses, from human food and feed for poultry and livestock, to the biofuel ethanol, to medicines including penicillin, to biodegradable packing materials,and much more.

Teosinte is barely recognizable – this plant has come a long long way.