The faces of our ancient ancestors are fascinating. From artistic renderings created thousands of years ago, to modern reconstructions by artists based on cranial anatomy (or more recently, genomic sequences from ancient DNA), I imagine these images provide a glimpse into the person’s soul. Decades ago, in a dusty and dimly-lit room in Cairo, I viewed the stunning gold death mask of Pharaoh Tutankhamen, the Egyptian boy king. The finely chiseled features of this face are mesmerizing. Now, not surprisingly, I am awed by the fabulous representational art of the ancient Andeans. This art includes portrait head vessels of high-status men created by the Moche culture that flourished along the north coast of Peru almost 2,000 years ago. 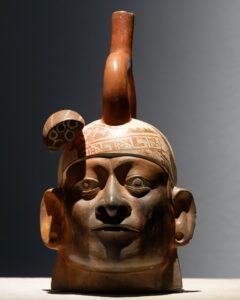 Believed to be true portraits, these ceramic images convey personality in depictions of emotions such as happiness, sadness, and anger. There is careful rendering of nose shapes, chins and other distinctive details of appearance. Abnormalities and flaws are also shown, including an image of a man who is paralyzed, below. Many of the vessels are a distinctively Andean pottery style known as stirrup-spout pottery. Intended to hold liquids, this distinctive style has a cylindrical upright spout that splits into two curved ones that join a rounded vessel, effectively combining the handle and the spout. 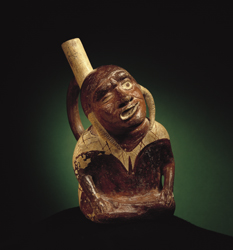 A few remarkable series of portrait vessels have been found, including one of over 45 portraits created over much of the life of an individual who had a distinctive scar on his lip. Other chilling sequences depict important men who are later shown as captives with ropes around their necks, likely prior to sacrifice. These images provide a window into the shifting and volatile political powers of the Moche world, as well as to the individuals who lived so long ago. 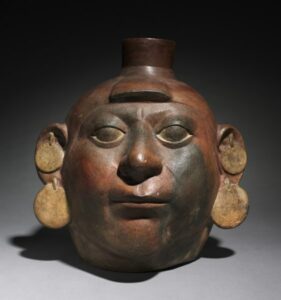 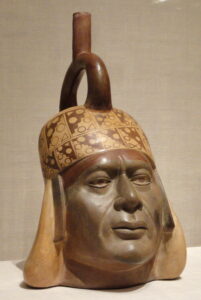