In the Andes Mountains of South America, the Incas and their ancestors invested enormous amounts of time and labor in the meticulous work of quarrying, transporting, and fitting together multi-ton stone blocks, or megaliths, for monumental construction projects. The temples and palaces that they built are iconic symbols of ancient Andean cultures. When I first visited archaeological sites Peru, I was captivated by the fine stonework and curious about where the massive stone blocks were quarried, and how they were moved and then fit into place.

The ancient Andean stonework is so impressive that many have found it difficult to believe that mere humans, who lacked draft animals and were using only stone-age tools, could be responsible for the construction. Some have alleged that the structures were built by a race of giants and others have attributed it to satanic assistance. Stone-softening acids from local plants have been proposed, either to cut the stone or to soften it so that it could be poured or compacted into molds. Lasers that focused sunlight with large parabolic gold mirrors have been suggested for stone cutting, as has extraterrestrial intervention. In local folklore, the Incas are even credited with knowing how to make the rocks walk by themselves. There is LOTS of misinformation out there. 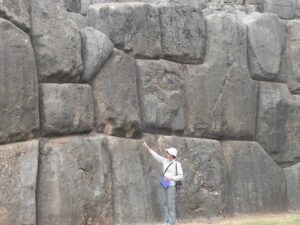 Terrace wall at Sacsayhuaman. I’m pointing at carved divets that might have been used with logs to prop up the block during fittings.

Carefully collected evidence, however, makes it clear that all construction tasks by the ancient Andeans were accomplished using human labor.  Archaeologists have recovered ancient stone tools left in quarries and construction sites, they have studied the accounts of 16th century writers who watched the Incas building Spanish Colonial structures, and they have performed stone-cutting experiments in Inca quarries.  Difficult as it is for some to believe, this research clearly indicates that simple tools and highly labor-intensive methods were the construction techniques employed by the Incas and their ancestors.

To begin, the ancient stoneworkers took advantage of “natural quarries”, in which the inherent tendencies of some rocks to break and form ready-made blocks were utilized. Mountain building processes throughout the Andes have been folding rocks over millions of years – and this can open cracks or joints in regular patterns across large sections of rock. In some areas of exposed bedrock, these joints break the rock into rough blocks in convenient sizes for construction, and these naturally occurring slabs can be collected and shaped relatively easily. Wedges could be pounded into cracks that had formed naturally, or that were accentuated or even started with stone tools, eventually splitting the rock apart. In some cases, water may have been used to help force rocks apart. By pounding wooden wedges into cracks, and holding the moisture in place with the wood, clay, or pitch, the night frosts at high altitudes would freeze the water and the expanding ice could eventually crack the rock.

There is a natural quarry at Machu Picchu, and this was probably a key factor in site selection. Construction of the terraces that support the buildings and other underground preparation work at the site required an estimated 60 percent of the construction effort. Having a nearby source for the tens of thousands of pounds of rock needed was a great asset. 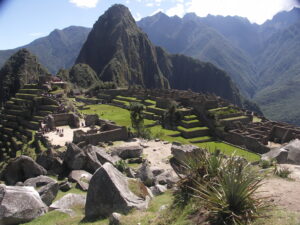 Many of the most important buildings in the imperial Inca city of Cusco were constructed of the volcanic rock andesite, obtained primarily from the Rumiqolqa quarry, about 22 miles to the east. Inca blocks abandoned in varying stages of production can still be seen in this quarry, which continues to be worked today. The massive blocks used for construction at Sacsayhuaman were quarried from several places, including nearby for huge igneous diorite blocks, limestone from about 9 miles distant, and andesite that probably originated from the Rumiquoqa quarry. Evidence from many Andean archaeological sites indicates that thick ropes, and enormous amounts of human muscle power, were used to drag the stones from quarries to building sites.

Nibbling and Biting Bits of Rock

Rough stone blocks were shaped into final forms by chipping away at the rock bit by bit, in a process called “nibbling”.  The primary tools used were hammerstones, composed of hard and rounded rocks typically collected from riverbeds. These were used in a set having decreasing sizes. Craftsmen would take large “bites” of rock with large hammerstones to begin shaping blocks and use progressively smaller ones as final trimming was approached. Hundreds of these tools were found in the 1910 excavations of Machu Picchu (including the one I had the opportunity to see, in the photo below) as well as at many other Andean archaeological sites. Some even show the finger indentations used to grip the stones. 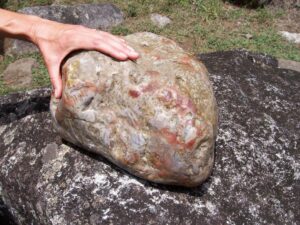 Several types of fine masonry styles were used, based on the size and shape of the stone blocks.  The most important structures, such as the curved wall of a temple at Machu Picchu in the photo below, were built using similar rows of smooth and roughly rectangular blocks.  Other walls were composed of irregular shaped polygonal blocks that are fit together like a jigsaw puzzle. One famous cut block in a wall in Cusco has 12 sides, although blocks with even more angles are known. Many fine stone walls have a signature rounded or convex “pillowed’ shape along the block edges; this creates an artistic effect of light and shadow that accentuates the patterns of the walls and draws attention to the fine seams between the blocks. 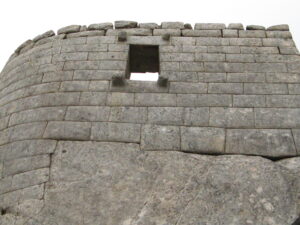 The close fits between adjacent blocks were achieved during construction by hoisting a block in and out of position to check the fit and then adjusting the shape as needed. Exactly how this was accomplished is a bit murky, especially for the gigantic blocks, but different types of template or scribing systems may have been used. Large temporary ramps were built with rock rubble to move the stone blocks upwards and into place. Disassembled ancient walls show that the closely fit joints at the front extend variable distances into the blocks, from only a few inches deep up to the entire thickness of the wall in extremely important structures. No mortar was used on the front faces of walls, although in some construction types rock rubble was used as fill behind the tightly fit front faces. While this process of shaping and tightly fitting heavy blocks together was clearly time consuming, it was not technically difficult

A characteristic feature of Inca stone walls is an inward slope of 3 to 5 degrees, and sometimes up to 10 degrees.  This increases the resistance of the walls to the shaking of an earthquake and can support a very heavy roof load.  The inward slope also helped to create a visual effect of an imposing and impenetrable structure.

Spectacular Sacsayhuaman and other Feats

The grand architectural complex of Sacsayhuaman, constructed on a steep hill with an impressive view of Cusco and the surrounding valley, is one of the archaeological wonders of the Americas. On the north side of this site are three immense terrace walls formed by massive interlocked stone blocks constructed in a zig-zag pattern. These carved blocks are unmatched in size anywhere in the Americas. Some reach 13 feet in height and estimates of the weights of the largest blocks range up to almost 200 tons. The towering walls are approximately 18 feet high; the longest wall extends for about a quarter of a mile.  Possibly more than at any other Inca archaeological site, the blocks at Sacsayhuaman have prompted wild theories that the walls were constructed either by a race of giants or by the Devil. 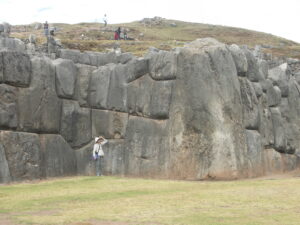 Abundant evidence, however, indicates that Sacsayhuaman was constructed using only human labor. For an estimated 60 years, a labor force of perhaps 20,000 men worked under a state-organized labor tax service to build the extensive complex.

And what remains is only a small fraction of the stupendous monument that existed during the height of the Inca Empire. After the Spanish invaded the empire and secured their occupation of Sacsayhuaman, they began the process of having the stone structures dismantled as a convenient source of building materials. An early Spanish chronicler reported that virtually every Spanish home built in Cusco contained blocks from Sacsayhuaman. Additionally, rumors of the possibility of buried treasure within the complex encouraged destructive excavations. Today, only the largest stone blocks remain. Ironically, these were not carried away because they proved much too difficult to move. 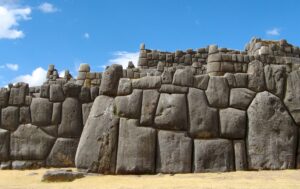 The colors, characteristics and locations where stone blocks were obtained were clearly important to the Incas. The extremes that they could go to in sourcing appropriate rock are illustrated by shaped andesite blocks that were incorporated in an Inca center high in the Andes Mountains near modern Saraguro, Ecuador. Analyses indicate this andesite is from the same source used to construct many of the important structures in Cusco and was obtained from the Rumiqolqa quarry. Archaeologists consider this a transfer of sacredness that tied the new center to the homeland in Cusco. One detail that obviously didn’t deter the Incas – the Rumiquolqa quarry is located an incredible 1,000 miles from the site in Ecuador. Dragging those andesite blocks for all those long miles clearly required monumental efforts on the part of the workers.

Quarry and temple wall at Machu Pichu, my photos, 2009

Sacsayhuaman megaliths, photos by F.H. Swan and me, 2009