Did you know that camels evolved in North America? From early rabbit-sized jobs to long-legged 10-foot-tall giants, the diverse camelid family flourished in North America for more than 40 million years. Then, about 3 million years ago, the Isthmus of Panama connected the North and South American continents and animal migrations between the continents commenced. Some camelids moved south into the Andes Mountains and grew thick coats for protection from the cold. Over time they evolved into guanacos and vicuñas, the wild ancestors of domesticated llamas and alpacas — icons of the Andes.

Vicuñas are graceful and small creatures with extremely soft and thick coats (photo above). They inhabit high altitude grasslands from roughly 10,000 to 15,000 feet in elevation. Guanacos are larger and thrive from low elevations up to about 13,000 feet (photo below). Both are hardy types that are well-suited to cold and harsh mountain environments. Their camel heritage gives them a complex plumbing system that allows them to survive on much less water than other animals. Instead of hooves, they have two-toed feet with toenails and soft foot pads that move, helping them to maintain a solid grip on steep and rocky terrain. 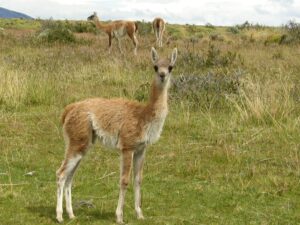 The characteristics of their wild ancestors contribute to making domesticated llamas and alpacas easy to herd. (My post: Mug Shots: Llamas and Alpacas has info about their differences and roles in Andean cultures.)  Alpacas were once thought to be descended from guanacos, but recent genetic studies show that the ancestors of alpacas are actually wild vicuñas. Bred for their luxurious pelts, alpacas are timid animals.

Llamas were selectively bred from wild guanacos. They are larger than guanacos and reared to serve as sturdy pack animals, the only native American beast of burden. Llamas are more independent-minded than alpacas. When annoyed they can kick and spit – when overloaded or simply tired of carrying loads, they lie down and refuse to move. 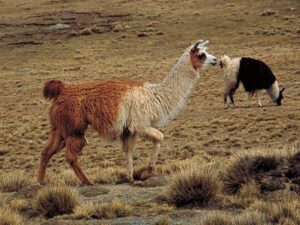 Both llamas and alpacas are extremely intelligent and very curious and observant of what is going on around them. While on a trek in the Andes, I watched llamas being used as pack animals for several days. Instead of walking behind one another along the trail like the docile horses and mules, they frequently set off on excursions to investigate interesting plants or other objects – their herder spent lots of time shouting and running after them. Their habit of spitting usually consists of mostly air and a small amount of saliva. When really annoyed, as females sometimes are when receiving unwanted attention from (ahem) a male, they can bring up a grassy mix of acidic stomach contents – and then project this as far as 10 feet. Gets the “back off” message across loud and clear. 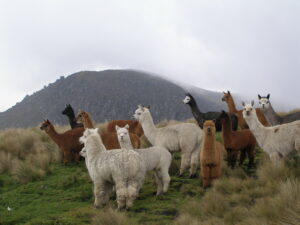 As for what happened to those camelids that stayed in North America instead of heading south? They were unlucky, and became extinct at the end of the Pleistocene roughly 12,000 or so years ago, along with lots of other large mammals. The reasons for this are widely debated, but over-hunting by expanding populations of humans is likely a major contributor, along with climate change and habitat loss. Fortunately for people, a few million years ago some of those ancient creatures trekked from North America south into the Andes Mountains.

My photo of guanacos in Patagonia