Deep in equatorial Africa, a high mountain range known as the Mountains of the Moon played a prominent role for centuries in myths about the source of the Nile River. An absorbing history of these mountains — which I knew nothing about — is published in Volcano Café, the blog site I have shared before. The name Mountains of the Moon alone caught my attention (I am a big-time appreciator of our shining moon!), but there is much more to learn.

These are quite unusual mountains, with six impressive peaks over 15,000 feet in height and rugged terrain indicating they are quite young (geologically)–but they do not have a volcanic origin. Also, located far from any converging tectonic plates, they are not a typical mountain belt produced by the folding and faulting associated with tectonic plate collision. As Albert, who wrote the post, states “They are mountains without a cause.” Curious? Read on for a brief summary, and you can find his post here: https://www.volcanocafe.org/the-mountains-of-the-moon/

Early European explorers credited the jagged and snow-covered Mountains of the Moon as the source of the Nile River–although first-hand reports from those who had actually seen the range were glaringly absent. The legendary Nile rises mysteriously somewhere within the African continent; it is in a close tie with the Amazon to be the longest river on Earth.

Late in the 1800s, after many explorations to find the source of the Nile had failed, multiple origin points were finally identified in the Great Lakes region of central Africa. In this region, Lake Victoria, Lake Albert and Lake Edward (names clearly marking the British colonial past) all drain into the White Nile, a major tributary and considered to be the headwaters of the Nile River. We now know the snowy peaks of the Rwenzori Mountains drain into these lakes, and so perhaps they are the fabled Mountains of the Moon, although there is dispute. Abundant rainfall, snowfall, and melting glaciers (currently diminishing alarmingly quickly) contribute water to the flow of the Nile, thus there is some truth in the mythology about these mountains.

Today, the Rwenzori Mountains straddle the border between Uganda and the Democratic Republic of the Congo. The range is small–about 75 miles long and 40 miles wide–but dramatically high. The tallest peak and 3rd highest mountain in Africa, named Mount Stanley, has a summit at 16,762 feet and towers 13,000 feet above the surrounding countryside. Five more peaks in the range reach elevations higher than 15,000 feet. (At 19,340 feet Mt Kilimanjaro is the tallest on the continent; the 2nd highest is Mount Kenya at 17,057 feet.) 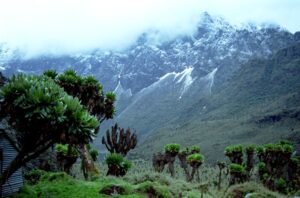 To learn the full cultural and geologic story, read Albert’s post, here: https://www.volcanocafe.org/the-mountains-of-the-moon/ . First, though, I’ll reveal the unusual geologic origin of these mountains. As it turns out, they are related to the East African Rift, also known as the Great Rift Valley, which will eventually split the African continent into two separate tectonic plates. For more information about this major rift, check out “The East African Rift System – A Belt of Natural Wonders” on the blog GondwanaTalks that I have also referred to before, here:   https://www.gondwanatalks.com/l/east-african-rift-system/ .

The Volcano Café has many interesting posts about volcanoes (although the technical detail in some posts and comments can be too complex for me) — including details about the recent eruption in Iceland. Also, as noted in my previous post referring to another excellent blog by Albert (see https://roseannechambers.com/lahars-and-penitentes-of-mount-rainier/ ), a bonus to checking out this website is seeing the clever Volcano Café banner. It shows a bartender, open shelves with an appealing display of bottles, and a fabulous view of a mountain range beneath a color-streaked sky–definitely a place I’d love to visit someday (except it doesn’t exist, I know I know….).

Map of Jibhel Kumri or Mountains of the Moon as conceived in 1819, image from p. 113 of “Great Explorers of Africa; British Museum.  https://en.wikipedia.org/wiki/Mountains_of_the_Moon_(Africa)#/media/File:113_of_’Great_Explorers_of_Africa._With_illustrations_and_map’_(11227997164).jpg