Masked faces on ancient life-sized, mummy-like figures form a long line on the rock wall of a shallow alcove in a remote part of Canyonlands National Park in southern Utah. Known as the Great Gallery, the 200-foot-long (61 m) panel contains around 20 eerie looking triangular-shaped bodies with small heads. Many of these anthropomorphic figures have round bulging eyes and elaborate decorations, and some figures are 7 feet (2.1 m) and taller. At least one thousand years old, and possibly much older, these images likely played a part in ancient rituals held deep in the canyon. Today, many researchers consider them among the finest examples of rock art in the Americas. 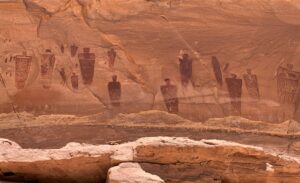 A bewildering collection of geometric, animal and human figures can be found in ancient rock art on the Colorado Plateau in the southwestern United States. Ancient artists have used the rock surfaces of canyon walls and boulders as drawing boards and canvases for rock paintings, or pictographs; they created petroglyphs by pecking, chipping, or cutting away the rock surface.

Anthropologists who study these forms have divided the art into styles that follow geographic and cultural boundaries. The supernatural appearing human-like images in the Great Gallery are known as Barrier Canyon Style, first described by Polly Schaafsma from the Horseshoe Canyon site (formerly known as Barrier Canyon). The National Park Service established the Horseshoe Canyon unit of Canyonlands NP in 1971 to protect this spectacular rock art. We can find the art style throughout much of eastern Utah and into northern Colorado. 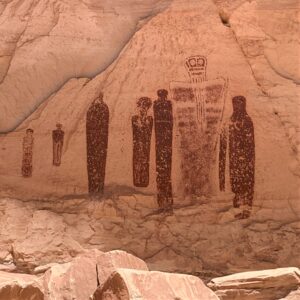 Barrier Canyon Style includes both rock paintings and pecked petroglyphs, sometimes with combinations where painted figures have petroglyph eyes and body decorations. For some paintings, the cream-colored sandstone was ground smooth to prepare the surface for paint. Paintings are typically red, but shades of blue, white, yellow and black are also used. Ground minerals, including iron for the reds and charcoal for black, provided pigments. To make the paint, a binder such as plant or animal oil was added so the paint would adhere to the rock surface. The artists used several layers of paint in some of the Great Gallery images. 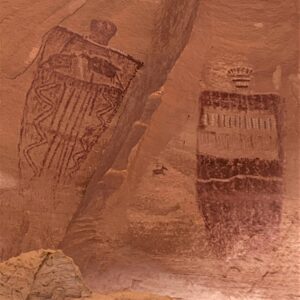 Since I am especially fond of animals, my favorite figure is the one above on the left with the two animals displayed on the chest. The complex stripes, zigzags and other geometric patterns on both of the figures are also intriguing. The colored paint has faded over the centuries, although it was probably vivid when first painted. Another of my favorite scenes shows small human images with bighorn sheep, below. 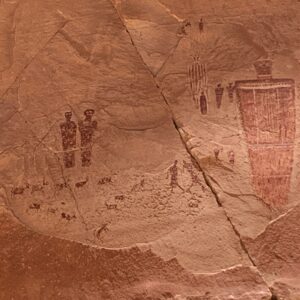 When, Where and Why

When was the Great Gallery painted? Researchers have sought the answer to that question for decades. Estimates range back in time for several thousands of years, but with high uncertainty, as direct assessments of rock art dates typically are difficult to make. (An interesting problem, which I plan to research for a future blog post!) Recently developed age dating techniques applied to a rockfall that removed some of the art (visible on the left side of the photo below) indicate a time window between 1 to 1,100 CE when the paintings could have been made (Pederson et al, 2014). This is younger than many previous estimates.

The Great Gallery requires extra effort to reach. It is located east of Highway 24 north of Hanksville, Utah near the spectacular rock formations of the San Rafael Swell. A bone-jarring ride on 32 miles (51 km) of unpaved roads ends at the trailhead. Then, there is a 3+ mile hike beginning with a steep descent into Horseshoe Canyon and a long slog, much of it in loose sand, along the stream wash to reach the Gallery. I recently visited this site for the second time, and it was as memorable as my first visit almost a decade ago.

Rock art is an important form of cultural expression. What were the ancient artists thinking when they laboriously painted and pecked these figures on the rock canvas? We have an incomplete understanding of the dreams, religions, and traditions of indigenous people. The rocks can’t speak, so we will never know what this artwork truly represents. 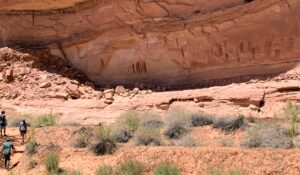