Many of us think we know the story of Thanksgiving. Specifically, the Pilgrim women in bright white aprons and the men in their dark clothing, large belt buckles and funny hats organized a party and gave thanks for their continued survival in the new land. Indians, who had helped the Pilgrims live through a difficult winter, joined the feast and a good time was had by all. Then, the colonies expanded, the Indians gave up their lands, and American democracy blossomed.

Except – almost none of this Thanksgiving story is accurate – it is a myth. This is emphasized in an article that I read in The New Yorker last year called: The Invention of Thanksgiving – Massacres, myths, and the making of the great November holiday by Philip Deloria, November 18, 2019 (link to the article in Sources, below). Perhaps you also read this piece? 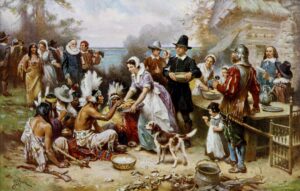 The First Thanksgiving, 1621, by Jean Leon Gerome Ferris, painted circa 1912 to 1915 (Note: definitely not historically accurate…)

The Thanksgiving story is traced back to a 1621 “meet-up” in Plymouth by Deloria. Creative flourishes that were added over the centuries, including proclamations by President Washington in 1789 and President Lincoln in 1863, produced the holiday traditions we observe today. Deloria refers to several books that have examined the history surrounding the Colonial period, including David Silverman’s This Land Is Their Land: The Wampanoag Indians, Plymouth Colony, and the Troubled History of Thanksgiving (Bloomsbury) and Lisa Brooks’ Our Beloved Kin: A New History of King Philip’s War (Yale), that examines the 1675-1676 conflict between the Indians and the English settlers, rooted in the ruthless and relentless seizure of Indian lands. You get the drift….while important to learn, it is a dark history.

On a lighter note – did you know that the holiday tradition of pumpkin pie would not be the same if it weren’t for the mammoths AND the ancient Americans who domesticated this plant?  If you missed the blog post I wrote last year – Pumpkin Pie and Pleistocene Extinctions — please check it out here: https://roseannechambers.com/pumpkins-and-pleistocene-extinctions/ 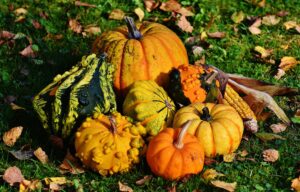 Of course, the “First Thanksgiving” back four centuries ago did not include pumpkin pie. There was no pumpkin – nor wheat flour, butter, or sugar. Although the Spanish Conquistadores found pumpkins in the 16th century when they invaded the Americas, and they carried this food back to Europe, it took many years before these plants were spread back to North America and other parts of the globe.

In this unusual year of 2020, many of us are mourning our reluctant but necessary choices to forego holiday gatherings. At least phone calls and video-connections can be a substitute. And we can still reflect on the many blessings we have in our lives – including family and friends – and pumpkin pie.

Feature photo: Pumpkins and candle image by Lolame from Pixabay

Painting of The First Thanksgiving, 1621, by Jean Leon Gerome Ferris, painted circa 1912 to 1915 (A note on Wikimedia: “The scene depicted here is … not historically accurate…”)  https://commons.wikimedia.org/wiki/File:The_First_Thanksgiving_cph.3g04961.jpg

Pumpkins and squashes image by Alexas_Fotos from Pixabay