Nevada encompasses an enormous variety of rock, mineral, and geomorphic features. Many aspects of this geology can be seen along Highway 50, which extends from west to east across the central part of the state. Highway 50 is also known as “The Loneliest Road in America” (doubling its appeal, IMO!). On a recent trip while camping at remote sites (social distancing!), I explored along a western section of this highway, including a few of the many intriguing sideroads that veer off to the north and south. And I discovered an abundance of geologic treasures that I want to share. In order of oldest to youngest, these are million-year-old volcanic rocks called tuffs, thousand year-old limestones known as tufa, and mere decades-old scarps formed by the ground surface displacements of two large earthquakes. An exciting chronologic range, so join me for a quick tour! 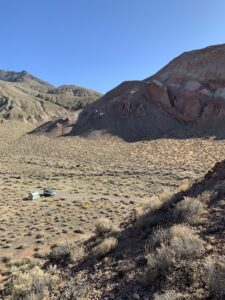 Camping on the eastern edge of the Stillwater Range

Driving along Highway 50 provides plenty of opportunities to admire evidence of the numerous volcanoes that have been erupting across the Nevada landscape during the past tens of millions of years. Happily, a large and colorful sequence of volcanic rocks dominated the view at a great campsite on the eastern edge of the Stillwater Range (reached by heading north towards Dixie Valley on Route 121, then turning west into a narrow canyon.) The rich shades of reddish and cream colored rock represent different eruption sequences, and then later exposure to wind and water. Highly explosive eruptions produced most of these rocks, when fiery clouds of rock and shards of glass called ash were ejected as pyroclastic flows that solidified into ash-flow tuffs. The gas bubbles, or vesicles, that developed in the frothy mixture were eventually filled with calcite. 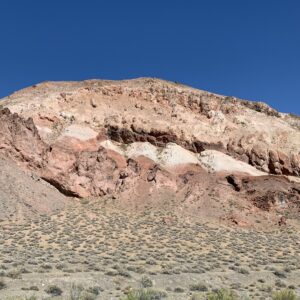 Volcanic rocks (Tertiary?) on the east side of the Stillwater Range 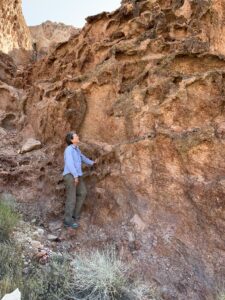 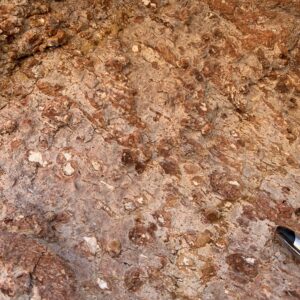 I also found impressive volcanic features in the Desatoya Mountains, crossed by Route 722 between Fallon and Austin. (Route 722 is a southern alternative to a short segment of Highway 50 – and an even more lonely and lovely road). On the east side of the rugged mountains are spectacular outcrops displaying ash-flow tuffs with columnar jointing, volcanic features that develop under specific cooling conditions. (The aptly named Devils Postpile, near Mammoth Mountain in the eastern Sierra Nevada, also shows distinctive columnar jointing in volcanic rocks.) 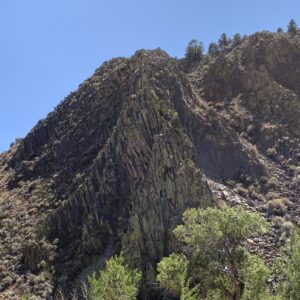 Columnar tuff in the Desatoya Mountains

Desert sands and sagebrush cover much of the landscape along Highway 50 through western Nevada today – but this region was once inundated by Pleistocene Lake Lahontan, one of numerous giant lakes that grew during the cooler and wetter climates of that epoch. Around 15,000 years ago Lake Lahontan had a surface area of more than 8,000 square miles and reached depths of 900 feet; Walker Lake and Pyramid Lake in Nevada are the lonely remnants. Prominent traces of ancient Lake Lahontan can still be seen in the giant stairsteps cut by the wave-cut terraces that mark the former shorelines. 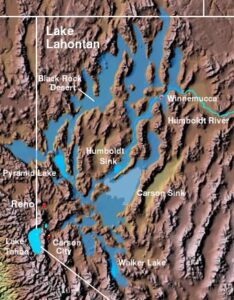 Today, the isolated remnants of the ancient Pleistocene lakes, including the Great Salt Lake, are within the Great Basin. This hydrographic region is defined by internal drainage, where precipitation sinks underground or drains down to lower elevations into lakes and then evaporates. Abundant dissolved minerals in the lake water, some originating from volcanic rocks, have gradually become more concentrated, effectively creating a salty soup.

At Grimes Point, about 10 miles east of Fallon adjacent to Highway 50, there are massive deposits of tufa that developed along the ancient shoreline of Lake Lahontan. High in the mountains surrounding the Pleistocene lake, water percolating down through the rock from cold rain and melting snow and ice, flowed into the lake from springs. The rapid temperature change as the cold water entered warmer lake water, and the high salt content of the lakes, precipitated calcium carbonate to form the type of limestone known as tufa. Tufa deposits encrusted the loose rocks along the lake shoreline, creating the strange “cauliflower-like” deposits that line the walls of Tertiary basalts, including in “Picnic Cave”, shown below. (The tufa towers of Mono Lake, east of Yosemite National Park, originated in a similar manner.) 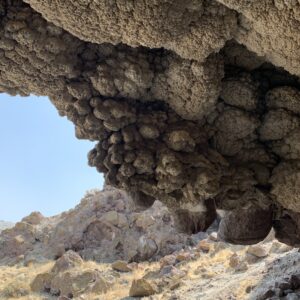 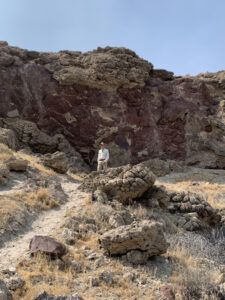 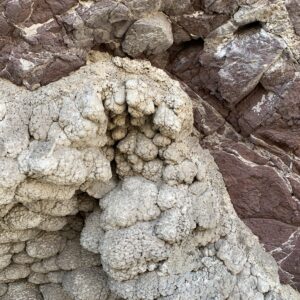 In addition to the tufa and ancient wave-cut terraces that can be seen at Grimes Point, it also has an important archaeological site that is notable for rock art that may date back as far as 7,000 years ago. More than 150 boulders of the volcanic basalt have been carved with petroglyphs. Over millennia, Native American artists created the mostly curvilinear and rectilinear abstract geometric designs by scratching deeply into the dark desert varnish on the basalt, exposing the lighter rock beneath. I have visited the petroglyphs many times over past decades when traveling on Highway 50 – but this was the first time I explored more of the Grimes Point area and became enthralled by the remarkable tufa deposits.

Driving north on Route 121 towards Dixie Valley, I knew the surrounding region had been shaken by two large earthquakes in 1954. As I traversed the road that parallels the Stillwater Range, I casually watched a prominent, light colored, and sometimes discontinuous thin line that stretched along the base of the mountains, just above the smooth slopes of the alluvial fans. When the line was abruptly interrupted by a lush patch of green vegetation, my suspicions were confirmed – I had been following the scarp of the surface displacement of the 1954 earthquake; the plants were growing where a spring is bringing water up along the fractured fault zone. Turning onto a track that reached the scarp, I walked along and was awed by the steepness, height and fresh appearance of features that were shaped over 60 years ago. 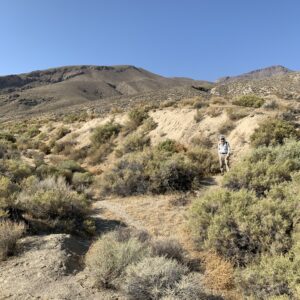 The Dixie Valley earthquake, magnitude 6.8, occurred 4 minutes and 20 seconds after the Fairview Peak earthquake, magnitude 7.2, on December 16, 1954. The Fairview Peak scarps are clearly exposed about 6 miles south of Highway 50 (follow a dirt road that begins about 2 miles east of Route 121). The total surface rupture from these two earthquakes extended over 60 miles in a complex zone about 9 miles wide. And because of these earthquakes, the mountains adjacent to the faults rose between 9 to 12 feet in height – impressive! 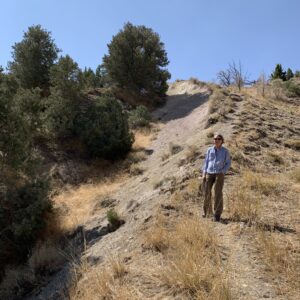 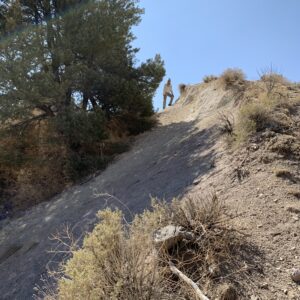 These are some highlights of this region – but there is much more out there! If you have an opportunity to drive along Highway 50, check out some of these sights for yourself!

Traveling – it leaves you speechless, then turns you into a storyteller – Ibn Battuta, circa 1350