On Beyond Lithium – Part 1

On Beyond Lithium – Part 1

Renewable energy from sunlight, water, and wind plays an important role worldwide—and renewable energy storage is an essential complement. Wind farms are being expanded in many regions, from sites on land to offshore in large bodies of water. Vast solar collection systems are producing abundant energy, based in part on engineering advancements developed for the space and satellite industries that have lowered costs.

Wind and solar energy sources have a major disadvantage, however, because power interruptions can happen during windless nights, or weeks with cloudy skies and consecutive rainy days. For the electric grids that supply our cities and industries, renewable energy storage is essential to reduce imbalances between energy demand and energy production. And we need to develop more and more storage capacity. From a recently published article “by one estimate, we’ll require at least a hundred times more storage by 2040 if we want to shift largely to renewables and avoid climate catastrophe” (Hutson, 2022). Fortunately, there are efficient storage technologies already in use, as well as innovative alternative approaches under development.

Globally, approximately 95 percent of energy storage installations currently rely on hydroelectric power supplied by large dams and reservoirs. During times of low electrical demand, plant operators pump water uphill and into a higher reservoir; later, when demand increases, they can release the water and use its gravitational potential to spin turbines. Since operators can easily turn this energy source up or down to accommodate changes in demand, hydropower is a valuable complement to intermittent production from solar, wind and other renewable energy sources. The energy efficiency of the pumped-storage hydropower process is high: between about 70% and 80%. 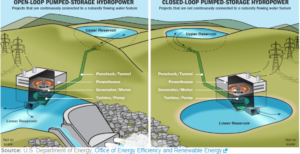 Many countries are now constructing pumped-storage hydropower, with reservoirs held behind new dams, although water availability and suitable sites in hilly terrain are restrictions for development. In the US, little additional energy storage from this technology will be available, as the days of building large dams are largely in the past. (Renewable energy storage issues aside, this is a wonderful thing, IMO!)

Also, there are climate complications for pumped-storage hydro. Ongoing droughts in many areas, and especially the Western US, are resulting in significantly lowered reservoir levels. Hydropower plant operators are cutting production or even shutting this down completely due to lack of water. The obvious effects: no hydropower—no pumped storage. In the Western US this situation may get worse, unfortunately. Meteorologists currently are predicting a third consecutive year of La Niña—the weather pattern that results in droughts in the southwestern US, heavy rains in the Pacific Northwest and Canada, and changes normal patterns of hurricanes and monsoons across the Pacific and Atlantic oceans. (I describe the El Niño/La Niña patterns in two of my posts – the first is here: https://roseannechambers.com/encounters-with-the-enso-part-1/ . ) Also, although there are still many uncertainties, some scientists believe that climate changes are contributing to an increase in La Niña-like conditions. Not an encouraging sign.

Moving Away from Lithium-Ion Batteries

Rechargeable batteries provide an important storage solution. Lithium-ion batteries are in widespread use for large-scale energy storage, as well as for mobile phones, electric vehicles, and the Mars Curiosity rover. There are Tesla “Megapack” lithium-ion battery electricity storage units tied to grid storage in California and Texas; soon, there will be a system in Hawaii to replace the state’s last coal-fired power plant. The Moss Landing electric substation in Monterey County, on the central California coast, is one of the largest of these systems and came on-line in June 2022 (operated by Pacific Gas & Electric, the energy provider in my region). Many other countries, including Australia, the United Kingdom, China, South Korea and others, are also operating lithium-ion battery storage systems. (You can check out a list of these plants here: https://en.wikipedia.org/wiki/List_of_energy_storage_power_plants) 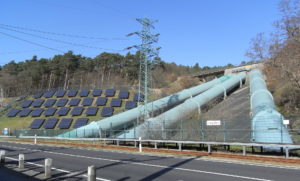 Using rechargeable battery storage systems to replace fossil fuel facilities providing extra power for high demand (known as “peaker” systems) is a positive step, but lithium-ion batteries have many deficiencies. Among these are the high environmental and social costs of lithium mining—topics I cover in my four posts about lithium. (Check them out on my website; the first one is here:  https://roseannechambers.com/leaning-forward-with-lithium/.)  Cobalt is also a component of lithium-ion batteries, and sadly, the realities of mining cobalt today are exceedingly dismal. Most of the world’s cobalt is mined in the Democratic Republic of Congo, where a significant percentage is mined by hand—and frequently by children. (Note: I’ve planned to write a post about cobalt mining, but the topic is so depressing that I can’t muster the enthusiasm.) 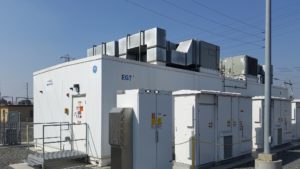 In 2017 Southern California Edison (SCE) unveiled the “World’s 1st Low-Emission Hybrid Battery Storage, Gas Turbine Peaker System – 50% less emissions, 60% less fuel, 45% less water. Like a hybrid vehicle, an advanced lithium-ion battery provides energy to the grid immediately, allowing time for the gas turbine to ramp up and take over, if needed. The battery is later recharged. The 10-megawatt battery storage system, combined with the gas turbine, allows the peaker plant to more quickly respond to changing energy needs, thus increasing the reliability of the electrical grid. The system is available 24/7, providing spinning reserves even while the gas turbine is offline. This feature improves the ability to integrate renewable power onto the grid because it can instantly step in when the wind or sun can no longer meet system needs.” (Wikipedia)

Fortunately, beyond lithium-ion batteries, there are mechanical and thermal approaches available for renewable energy storage. Some of these have been around for decades, and even centuries. Several take advantage of the simpler laws of physics and might be something even a Fred Flintstone-type could have used. Energy storage technologies that are currently in research and demonstration stages are being developed with billions of dollars in private investor and US Department of Energy funds. In a Part 2 post, I’ll describe some of these new and promising approaches.

Figure showing open-loop and closed-loop pumped storage hydropower systems. An open-loop system has a continuous source of downstream water that is pumped uphill to an upper storage reservoir. Closed-loop systems pump water from a lower storage reservoir, which is not continuously filled with water and is generally not connected to a flowing source, US Energy Information Administration, 2019.