On Beyond Lithium – Part 2

On Beyond Lithium – Part 2

Renewable energy storage is essential for expanding clean renewable energy use and limiting consumption of fossil fuels. The major renewable storage types currently in use—pumped storage hydropower and lithium-ion batteries—have limitations. (I describe both in Part 1 of this series, here:  https://roseannechambers.com/on-beyond-lithium-part-1/.) Fortunately, many researchers are working on new and intriguing storage approaches. Some have potential advantages of relying on locally sourced materials, or they can use abandoned facilities such as wells or mines, plus many are modular and can be easily scaled-up to meet local demand. A few approaches, each based on relatively simple mechanical engineering fundamentals, have captured my interest and I describe them in this post.

We can store potential energy by lifting a heavy object, and then lowering it to take advantage of the gravitational, or kinetic, energy. On a sufficiently large scale, this renewable energy can spin turbines and generate electricity. It is especially efficient when excess energy from solar, wind, or other renewable sources is available during times of low demand.

Pumped-storage hydropower is the most widely used gravity storage approach worldwide, and now researchers are experimenting with similar engineering fundamentals by replacing the water with heavy blocks. In these facilities, they can pull units of material that incorporate concrete and metal upwards on rails, cranes, or elevators and then lower them when needed to convert the kinetic energy into electricity. Tall structures, or deep and vertical mine shafts that are no longer in use, are potentially suitable for this approach. 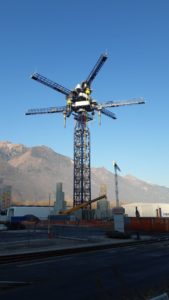 The company EnergyVault, founded in California but now with global partners, takes advantage of gravitational energy with a couple of designs. One is a six-armed crane that stacks massive, 35-ton composite bricks, and is currently in a project in Switzerland. Another design is a multistory warehouse-type structure filled with pulley-type systems that are effectively individual elevators that lift the blocks up and then lower them. Software organizes the movement of the blocks, which are like water in a recirculating fountain, allowing production of variable amounts of energy. The company can construct the custom-made blocks on-site with local soil, concrete, mine tailings, coal ash, and other recycled waste materials that might normally end up in landfills. The EnergyVault website states that even end-of-life decommissioned wind turbine blades can be incorporated in the blocks.

Another company, Advanced Rail Energy Storage (ARES) has a chain-drive system called GravityLine that pulls heavy cars uphill when excess energy is available, then lets them roll downhill when the attached grid requires power. Recycled steel rails and low-carbon-mass cars are currently being used in a demonstration of this system near Las Vegas, Nevada.

A variation of pumped storage hydropower involves injecting water deep underground and storing it under pressure until operators can release it back up to the surface to drive generators. This approach uses technology that engineers in the oil and gas industry developed for fracking. Engineers are designing systems to use abandoned wells or mines that extend deep below the ground surface, potentially avoiding many environmental and construction disruptions, along with costs.

A Houston-based company named Quidnet is showing the feasibility of such a system, referred to as “geomechanical pumped storage”, in wells drilled in several US states and in Canada. Operators can pump water from aboveground tanks into the wells where it is stored under pressure, then later release the water to power turbines before it flows back into the tanks. Eventually, company leaders hope to expand to abandoned wells, of which there are hundreds of thousands in the US. In Australia, former deep shaft gold mines are being proposed for underground hydropower storage projects; some of the shafts extend to depths of more than 4,500 feet (~1,400 m).

Compressed air has been in use for energy storage since 1978 in Germany, and more recently in other countries. In this process, operators pump air into artificial or natural caverns, such as salt domes, and later release it to drive turbines and generate electricity. Disadvantages are that natural cavities require a specific type of geology that may not be available, and there are high construction costs. Engineers are working on improving efficiency by storing compressed air in large tanks and taking advantage of the heat that is produced when they compress the air. Adding this heat back when air expansion takes place improves efficiency significantly. Other researchers are cooling air to where it becomes a liquid, known as cryogenic thermal energy storage. When released, the air gasifies in explosions with violent force, releasing energy that can be converted into electricity. 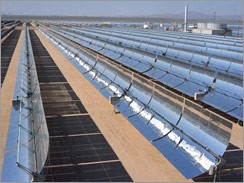 We can also store potential energy thermally by heating things up. Many materials can store heat, including salt and volcanic rocks. Solar thermal collectors with both straight and curved panels, called parabolic troughs, can focus sunlight onto a tube in the center of the collector. Salt in a liquid state (268o F/131o C) can be heated to even higher temperatures (1,051o F/566o C) in the solar collectors. After storing the molten salt, operators can use it later to produce superheated steam to drive turbines and generate electricity. The Solana Generating Station near Phoenix, Arizona, completed in 2013, was the largest parabolic trough plant in the world when commissioned. In Andalusia, Spain, the Andasol Solar Power Station uses parabolic troughs and stores the salt in large tanks. The process reportedly almost doubles the number of operational hours at the solar power plant each year. 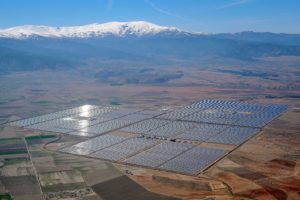 A company named Antora Energy has been tackling the energy needs of heavy industries that require high temperature heat to make steel, glass, cement and plastics. Some of these processes require far more energy for heat than for electricity, using natural gas boilers that are contributing majorly to greenhouse gas emissions worldwide. Antora takes standard graphite blocks—used by the millions each year to manufacture metal products—and excess electricity from renewable sources to heat the blocks in a type of thermal battery. The company website states these blocks “glow like a toaster” and can discharge “both electricity and process heat up to 1500o C, on demand”. The heat can be used directly for industrial processes, or the high-intensity light can be directed onto specially designed solar panels to generate electricity. The thermal batteries that store the heat are about the size of a large truck trailer. They are still under development, but demonstration deployments may begin late in 2023.

To meet the demands of providing renewable energy storage, a particular technology ideally meets several criteria. Operators need low-cost and modular systems that can be scaled up or down depending on needs. Energy density—packing lots of power into a relatively small space — is important. So is efficiency—retrieving a high percentage of the energy put into a system. Approaches that can mesh with an existing electrical grid system, as well as those that provide storage for new renewable power sources in the developing world, are available. Fossil fuels and lithium-ion batteries will continue to have a place in supplying reliable power, but there are also alternatives. The variety of renewable storage options under development provides enormous opportunities—and many reasons for optimism!

Photo of parabolic troughs of the type used to heat salt for thermal storage, US Department of Energy, 2006. https://en.wikipedia.org/wiki/Parabolic_trough#/media/File:Solar_Array.jpg