There are five volcanoes in the USA that currently exhibit evidence of increased activity – no eruptions (so far), but numerous small earthquakes and steam plumes – reported by the US Geological Survey for the week beginning April 13, 2020*. The USGS cautions: “Activity could increase with little or no warning … resulting in lava flows outside of the crater, lahars, and ash emissions… Episodes of lava effusion and explosions can occur without advance warning.”** Can you guess where these are located? (Hints: not Mount St. Helens or Kilauea, and in two different US states.) The map below will be helpful: 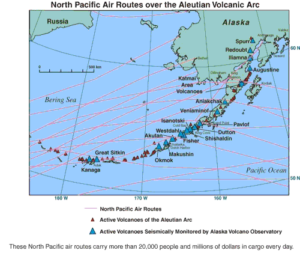 The two states? Hawaii and Alaska. One volcano stirring to life is Mauna Loa in Hawaii and the other four are in Alaska – specifically, in the Aleutian Island chain that extends from the Alaska Peninsula to the Kamchatka Peninsula in Russia. Shishaldin, the tallest and one of the most active volcanoes in the Aleutian Islands, is at a higher level of alert than the other four because it has had elevated temperatures measured (remotely!) at the summit. Volcano monitoring over the Aleutians is critical – the map above shows aircraft routes that cross these volcanoes (although currently, we can assume lots fewer people and cargo are being carried than indicated….).

Mauna Loa, the enormous volcano that covers half of the Big Island of Hawaii, erupted most recently in 1984. It is currently being watched carefully, however, as dozens of small earthquakes have been occurring near the volcano’s summit. These earthquakes indicate movement of magma into the storage system for the volcano, validated by GPS measurements that show an ominous bulging at the top of the summit. Kilauea, on the southeastern flank of Mauna Loa, is the youngest volcano in Hawaii and had almost continuous eruptive activity from 1983 to 2018. Although Kilauea is currently quiet, it ranks among the most active volcanoes on Earth and is considered to have a high threat potential. 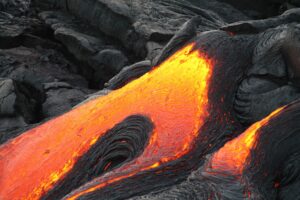 The Aleutian Islands are a volcanic arc — a chain of volcanoes above a subducting tectonic plate. There are 14 large and 55 smaller islands, extending for about 1,200 miles across the Bering Sea. Most of the islands are part of the State of Alaska – a few on the far eastern end belong to Russia. There are more than 50 volcanoes in the chain – most with names I can’t pronounce. These started erupting about 50 million years ago when the Pacific Plate began subducting beneath the North American plate.  Recent activity in the Aleutians is currently highest at Shishaldin, but in the past few weeks it was also high at Semisopochnoi.

In case you are wondering, here are the potentially active volcanoes in other US states:

These landmarks promise lots of action ahead – although maybe not for a few tens, or maybe hundreds, or even thousands of years? No one really knows. 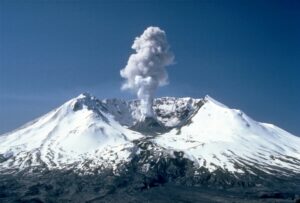 North Pacific air routes over the Aleutian volcanic arc. From the Alaska Volcano Observatory, a joint program of the United States Geological Survey, the Geophysical Institute of the University of Alaska Fairbanks, and the State of Alaska Division of Geological and Geophysical Surveys. 2004. https://commons.wikimedia.org/wiki/File:North-Pacific-air-routes.png