Rifts and the Rio Grande

Rifts and the Rio Grande

The deep and steep-walled Rio Grande gorge in northern New Mexico is remarkable from several perspectives. This large gash is developing because the Earth’s crust is pulling apart, creating a linear depression, or rift, that provides a convenient location for a large river to develop. On a recent trip, I stood on a bridge far above the river and admired a group of desert bighorn sheep far below. Later I hiked down into the canyon where I dipped my feet into the cold water, watched fly anglers, and thought about the benefits of this watercourse for people and wildlife. 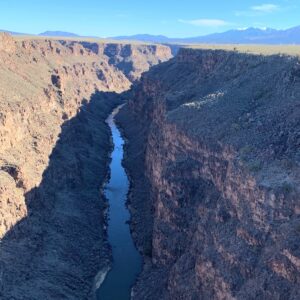 Rifts develop where tectonic plates are separating as extensional forces pull them apart. A rift valley forms as a depression called a graben, where faults on one or both sides of the rift break and the graben is down-dropped into a trench-like feature. Major rifts are located where two continents are moving apart along mid-ocean ridges, such as the diverging North American and Eurasian plates, and the South American and African plates along the Mid-Atlantic ridge. In this rift zone, hot magma is rising to the surface and then cooling to form new oceanic crust.

On our dynamic planet, continents are also breaking apart. Rift zones that are opening, or that began to open and then activity ceased, include the Gulf of California, the Red Sea rift and the Gulf of Suez rift. Large rivers in rift basins include the lower Mississippi, the White Nile and the Rhine, in addition to the Rio Grande.

The Ribbon of the Rio Grande

The Rio Grande begins in the San Juan Mountains of Colorado and flows to the Gulf of Mexico, where it forms the boundary between the US and Mexico. It is the fourth longest river in the lower 48 states and creates a ribbon of green for almost 1,900 miles across an otherwise dry and brown landscape. The rift provides an important north-south travel corridor that people have used for millennia. It is also a focus for cities, including Taos, Santa Fe, Albuquerque, El Paso, and Ciudad Juarez, that lie within the rift. 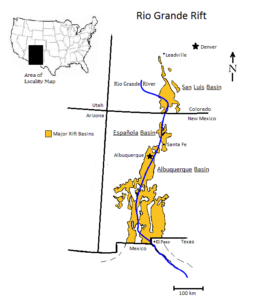 In the northern stretches the Rio Grande flows through a series of north-south trending basins with mountains on either one or both sides. Four major staggered basins extend from Colorado through New Mexico, with the Albuquerque basin the largest and oldest. In the southern reaches, the character of the landscape around the river changes dramatically, with broad and shallow floodplains and a large delta where it reaches the Gulf of Mexico.

Geologically the Rio Grande rift is a relatively young feature that started to form around 30 million years ago. As the Colorado Plateau was rising to the west, rifting separated this plateau from the Great Plains region. Rivers ancestral to the Rio Grande flowed into the basins along the rift. Unlike most rivers that down-cut and branch upstream, the Rio Grande slowly traced a course downstream following pre-established rift valleys. At various times, it became stalled for a time when filling shallow lakes, until it finally reached the Gulf roughly 1 million years ago.

Crustal extension thins the crust and hot magma moves upward, eventually breaking out onto the surface in erupting volcanoes. This volcanic activity has left much of the northern regions of the rift covered in volcanic ash and lava flows. As I hiked down into the canyon, the trail that I followed to reach the river contains a continuous sequence of volcanic rocks, spewed out over millions of years.

A generalized cross section of the Albuquerque basin from east to west. Note the half-graben geometry, Paleozoic and Mesozoic sediments that existed pre-rift, and the large (up to 28%) amount of extension.

The Rio Grande rift is actively widening, with evidence from hot springs, earthquakes and volcanic eruptions within the past few thousand years. The part of the rift around Socorro in central New Mexico has ongoing surface uplift from a magma body that is growing slowly. Earthquake activity in this region includes two events of approximately magnitude 5.8 that occurred in July and November 1906. If the rift continues to grow, in a few million years there could be ocean-front property in New Mexico! 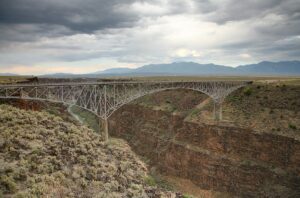 Fabulous views of the rift are provided mid-span from the impressive Rio Grande Gorge Bridge, a steel arch bridge that towers about 600 feet high above the river near the picturesque town of Taos. On my recent visit, after walking midway across this bridge and looking down into the deep canyon, it thrilled me to see the distinctive horns and white rumps of a group of about a dozen desert bighorn sheep–exciting! These large animals are usually spotted only from great distances, typically silhouetted high on a rocky ridge. We have decimated their numbers throughout the Western US through hunting, diseases contracted from domestic livestock, and habitat destruction.

Watching the herd from far above, we repeatedly saw one aggressive individual backing off 10 or 20 feet and then racing at full speed towards an opponent, when the two would crash their heads together in typical head-butting style. After the jarring impact, the instigator would appear to lose interest and wander away for a while, munching on tall grasses, until deciding to engage in a head-butting match with another sheep in the group. Probably these were young animals involved in playful behavior. Bashing heads together for “fun” is good practice to prepare for the late summer/fall mating season, when the dominant males need to fight for the rewards of ruling over a harem.

Several years ago I hiked into the gorge upriver from the bridge near Taos, starting from the high plateau of the Wild Rivers Recreation Area near Questa (part of the Rio Grande del Norte National Monument). Walking close to the river, by chance I came across impressive ancient rock art depicting bighorn sheep. Also exciting! Many Native American groups frequented this region and hunted the bighorn sheep, a valuable commodity. During my recent hike in the same area, I searched for this rock face–but I didn’t look enough in the right place, and so my search was a disappointing failure. Fortunately, I have a photo from my previous hike to prove the rock art really is there! Someday, I hope to find it again. The sparkling river, the gorge lined with volcanic rocks, and the elusive bighorn sheep – both those living and those shown in petroglyphs–are all compelling reasons to return to the Rio Grande gorge again.

Cross-section of Albuquerque Basin by utdlabrador, after L. Russell & S. Snelson, ”’Structure and Tectonics of the Albuquerque Basin Segment of the Rio Grande Rift: Insights from Reflection Seismic Data”’  https://commons.wikimedia.org/wiki/File:Riogranderift_albuquerquebasin.png