The Qhapaq Ñan, or Great Inca Road, that united the Inca Empire in the Andes Mountains was a tremendous engineering achievement. The Incan road designers took advantage of many pre-existing roads and trails. They expanded this system until the vast empire, which flourished from 1438 to 1533, was linked together by a 25,000 mile network of roads and trails. The Incas did not have the advantage of a written language, nor the use of iron tools or the wheel – but they did have exceptional design skills, a huge labor force, and sophisticated organizational capabilities.

Along the roads, carefully designed drains and culverts redirected torrential rains, walls of stone blocks protected coastal sections from blowing sand, and causeways were built over swampy wetlands. Flat paving stones covered even remote segments of the road network. In steep and rocky areas, long flights of stairs were constructed, and stairways and tunnels were carved into the solid bedrock. Most challenging of all: bridges had to be built to cross deep and precipitous canyons filled with raging rivers of white water. 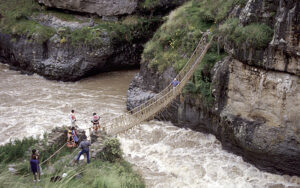 The rugged Andes Mountains are interspersed with deep valleys that form natural barriers. Constructing bridges to connect isolated lands played a strategic role in Inca expansion. The bridges allowed Incan armies to conquer new territories and unite previously separate communities, as well as to travel quickly and efficiently from place to place. In the case of civil uprisings, destroying bridges provided an effective way to slow a pursuing army. During stable periods, the bridges were valuable control points for monitoring travelers and collecting taxes. 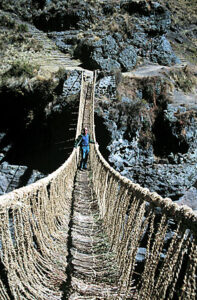 An estimated 200 or more major suspension bridges were built by the Incas. Woven from saplings, vines, and grasses, these bridges utilized thick rope cables that were securely attached to stone abutments or anchors. Many bridges had remarkably long spans, sometimes as much as 150 feet (about the width of an NFL football field). The suspended design of the longest bridges required substantial strength. Three main cables were used and each one needed to safely support at least 20,000 pounds. With a margin of safety, the breaking strength of the largest cables may have been as high as 50,000 pounds. And they could be quite large: one 17th century Spanish chronicler stated that some were as thick as a man’s body. Constructing rope cables of this size and strength, and successfully spanning rivers and anchoring the cables, represented significant engineering challenges.

After the fall of the Inca Empire, many Incan bridges continued to be used for several centuries. These bridges could extend across longer distances than those of any masonry bridge built up until that time in history. Although the Spanish Colonialists attempted to introduce European bridge technology in the Andes, these efforts ended in failure. No superior design alternatives were available until the technology for long-span iron and steel structures was developed in the 19th century.

Two communities in the Andes today are connected by a 100-foot-long fiber suspension bridge. The Q’eswachaka bridge across the Apruímac River in southern Peru is rebuilt each year in an annual festival that keeps ancient traditions and skills alive. The local people work together to collect the grass, intertwine the fibers to construct thick ropes, secure them on either side of the river, and then attach the fiber sides and mat for the bridge deck. It is a remarkable acknowledgement of the engineering skill of the Incas, and the impressive extent to which the indigenous people adapted to the challenges of life in the Andes Mountains. 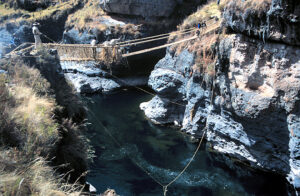 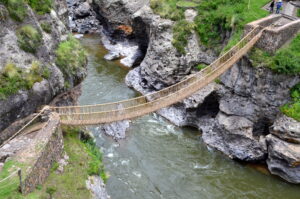