Opportunities from mining metals to developing new drugs are being found as researchers examine our oceans more carefully. Oceans cover 71 percent of the Earth’s surface, with ocean floors typically at depths of about 16,000 feet (4,877 m) below sea level, and as much as about 36,000 feet (10,973 m) where continental and oceanic tectonic plates collide at the Mariana Trench in the Pacific Ocean. By volume, the oceans provide an astonishing 99 percent of the planet’s living space. And we have a lot to learn about these environments. Knowledge about our oceans lags far behind that of other parts of our world (and some say, even our knowledge of the moon!)—but now, that is changing.

By late 2017, researchers had mapped about 6 percent of the global seabed, mainly from ships that were recording with sonar instruments as they crisscrossed the ocean in straight lines. Just five years later, this number rose to roughly 21 percent mapped as of June 2022. Efforts are underway to map the entire seafloor by 2030. Compiling the patchwork of data collected by research institutions, governments, and industries is proceeding rapidly, organized in part by the Nippon Foundation based in Tokyo, Japan.

Recent seafloor mapping has revealed many unusual and fascinating findings. These include a reef tower 1,640 feet (500 m) tall just beyond the northern end of the Great Barrier Reef in Australia, with the tip only 130 feet (40 m) below the surface of the sea. Another fascinating find is thousands of white coral mounds that cover thousands of square miles in the Atlantic Ocean, east of the US state of Georgia. These corals are at a depth of 2,000 to 2,600 feet (610 to 793 m). Sunlight can’t reach this deep below the surface, and so the algae that gives shallow reefs their color can’t survive, and the corals are white. Scientists estimate the mounds have been growing for thousands of years, and some are as high as 300 feet (92 m).

The deep oceans contain tremendous biodiversity. Researchers are only beginning to understand the diverse lifeforms that flourish there. Thousands of new species are being discovered each year. Scientists estimate that perhaps as much as 90 percent of the species that dwell at the bottom of the Pacific Ocean are unclassified.

The creatures that grow slowly on seafloors hold mystery and promise. Many marine invertebrates that live in these deep environments attach themselves to hard objects and cannot move. To survive, they have evolved sophisticated chemical defenses to ward off fish and other predators, and these qualities make them a promising target for biomedical research. Hundreds of compounds derived from marine organisms have shown the ability to attack human pathogens, including cancer cells and viruses. The US Food and Drug Administration has approved more than a dozen drugs derived from marine organisms, including ones for chronic pain and high cholesterol. A few dozen marine-derived compounds are currently in clinical trials. How many more valuable compounds are awaiting discovery? 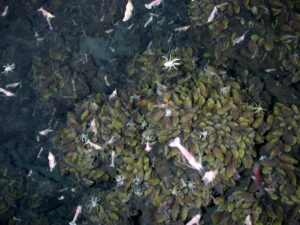 Deep-sea fauna, including shrimp, lobsters, and mussels, on a hydrothermal vent (Wikipedia)

Between the Devil and the Deep Blue Sea

We know metals exist in abundance on seafloors. In deposits around the vents or fissures where geothermally heated water is discharged (“black smokers”), there are massive sulfide deposits that can be rich in gold, cobalt, and rare earth elements—plus a unique set of lifeforms (photo above). Sea mounts, the undersea mountains caused by plate movement over hotspots, can contain deposits of cobalt-rich iron and manganese crusts. Many of these metals could play an important role in strategies to decrease our reliance on fossil fuels. Significantly, they include some metals that are at risk of shortage or supply chain disruption.

There are also certain areas of the deep ocean floors that are covered with billions of mineral concretions known as polymetallic nodules. A remote stretch of the Pacific Ocean between Mexico and Hawaii, called the Clarion-Clipperton Zone, is attracting attention because of the abundance of these nodules. Many researchers refer to them as “a battery in a rock”. Somewhat similar in appearance to a charcoal briquette, they are egg or potato-sized lumps of rock that are rich in manganese, nickel, cobalt, copper, and other metals. The nodules formed over millions of years by absorbing the metals suspended in seawater.

Many believe these nodules are critical for supplying vitally needed storage battery components. There is a rapidly expanding demand for batteries to smooth out supply and demand from renewable power sources like solar and wind, to run electric vehicles, and to support other technologies to help us move more quickly toward limiting use of fossil fuels. Sounds great—except there are significant environmental concerns. These nodules are on the bottom of the deep ocean. In the Clarion-Clipperton Zone, explorers find them at depths of 13,000 to 20,000 feet (3,962 to 6,096 m) — a dark and cold environment that is under extremely high pressure. 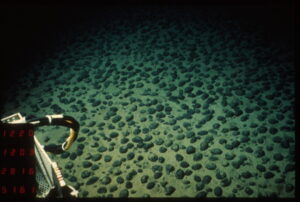 Polymetallic nodules, taken from the Nautile submarine in the northern equatorial Pacific (Wikipedia)

Worldwide, companies and countries are enthusiastic about harvesting polymetallic nodules. The International Seabed Authority has granted around two dozen licenses to explore for these nodules, and the technology to harvest them is well underway. Robotic bulldozers, built to withstand the extreme pressures of the deep water, would suck up the nodules. Then the nodules would move through long pipes to be separated and deposited on a ship, and operators would pump the excess sediment back into the ocean. Companies are gearing up for commercial operations that could start as early as 2024, with at least one nodule processing plant planned in Texas.

What could go wrong? 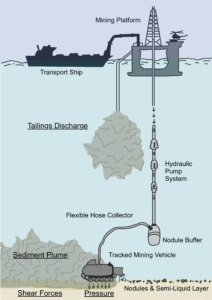 Mining will destroy the seafloor habitats where dredging occurs. Many marine lifeforms rely on the nodules as a solid surface to attach to in the vast expanses of fine sedimentary ooze covering the seafloor. The large machines trundling across this floor will kick up dense clouds of sediment that will smother or choke the many creatures unfortunate enough to be in the region. Also, no one really knows what enormous amounts of sediment dumped back into the ocean will do. Since there are no strong currents deep underwater to disperse these plumes, it is likely they will hang in muddy clouds that slowly disperse over a wide area. The bioluminescent light used by many deep-sea animals to attract prey and find mates could be obscured. Toxic metals in the sediment plumes could poison food-chains, possibly disrupting important fisheries and livelihoods. How much of the ocean the deep-sea mining might disrupt is unknown—after all, we have only minimal understanding of these complex and fragile ecosystems.

The deadly and more frequent heatwaves, floods, and wildfires on our planet are evidence of the urgent need to decrease fossil-fuel consumption drastically. And yet laying waste to the last of the pristine environments on our planet would be tragic.

Mining companies argue that we vitally need polymetallic nodules to acquire the large quantities of metals needed for batteries. Industry representatives stress that mining these metals on land has a significant negative environmental impact, and the ocean is the only alternative source. (Given the promise of riches that these nodules hold, economic considerations have something to do with this too—you think?)

Unfortunately, we don’t have to look too far on our planet to find landscapes devastated by actions taken by our societies—from the moonscapes of strip mines and clear-cut forests, to coastal towns leveled by hurricanes when people destroy protective marshlands and mangroves.

There are alternative power storage technologies that hold promise—and could avoid using cobalt, manganese, nickel and copper. (See my recent posts: On Beyond Lithium ) Metal recycling could also decrease the need to mine more metals. If engineers and entrepreneurs can develop these technologies so that we could employ them on a significantly large scale, then the demand for metals would be reduced. The need to make investments in these technologies an urgent priority is obvious—as is the need to assess and carefully consider the environmental costs associated with deep-sea mining.

“We have no clue what is going to happen [with deep-sea mining] … It’s like driving on the wrong side of the road at night and turning off your headlights.”  Stefan Brager, former International Seabed Authority marine biologist, now serving as an adviser to the German government (Lipton, 2022)

Photo of polymetallic nodules taken from the Nautile submarine in the northern equatorial Pacific, 2004 by Philweb. https://commons.wikimedia.org/wiki/File:Champ_de_nodules_dans_le_Pacifique_%C3%A9quatorial_nord.jpg