Silver – Tears of the Moon

Silver – Tears of the Moon

Gold and silver metals provided an essential symbolic link between the Incas and the cosmos. Gold was associated with the Sun in the Inca world, and sometimes known as the “sweat of the sun.”  The wife of the Sun was “Mother Moon” and her essence was silver — “tears of the moon.”  An important temple in Inca Cusco was dedicated to the Moon goddess and attended by priestesses. Since I have been fascinated by the waxing and waning of the moon throughout my life, perhaps I was a Moon priestess in another lifetime? (Scary thought…..)

Silver ore occurs in areas of rock that have been altered to distinctive zones of red to yellow color. These colors form when water reacts with the sulfides associated with the exposed veins of silver minerals. Silver in the Andes is usually found in natural combinations with other metals, called alloys, that include copper, gold, lead and zinc. The ancient Andeans learned to add silver to gold, creating an alloy with a lower melting point and increased hardness, allowing the gold to be worked more easily. Silver and gold paired together had an important symbolic relationship of dualism in some ancient Andean cultures.  Pairs of objects, one gold and another silver, were often crafted. Composite gold and silver were used within single ornaments. 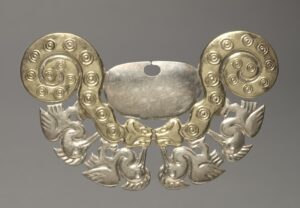 The ancient Andeans were using silver by at least 2,000 years ago. Archaeological sites on the north site of Lake Titicaca, near the modern city of Puno, contain thick sequences of rubble associated with metal working, along with household debris, tools and other refuse. The region is known for rich silver deposits within volcanic rocks. Evidence of numerous ancient mines, in the form of large piles of mine tailings and dozens of quarry pits, some more than 20 feet deep and 30 feet across, are found near Puno. 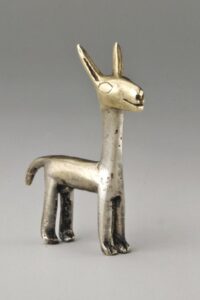 Separating silver from impurities is accomplished by high-temperature smelting. Andean metalworkers used large ceramic vessels with vent holes along the sides as furnaces to smelt metallic ores. The furnaces were placed on hillslopes with reliably high night winds. The winds fanned the flames and increased the temperature of the fires, which were fueled with charcoal, llama dung, and coarse grasses. A Spanish visitor to the silver-rich Potosi region in 1549 noted that during dark nights, the glowing furnaces around the mines numbered in the thousands and looked like decorative lights (luminarias). It must have been a remarkable sight. 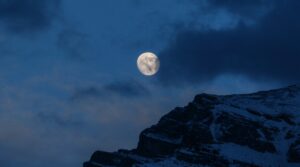 Moon and Mountain photo by Kym MacKinnon on Unsplash