The Dark Side of Gold

The Dark Side of Gold

The ancient Andeans revered shiny gold, with a fascination that reached a pinnacle during the time of the Inca Empire (1438 to 1533) when gold was believed to represent Inti, the Sun god.  In my post: Gold – Essence of the Sun – I wrote about some aspects of this glittering metal and concluded by mentioning that there are dark sides to gold. 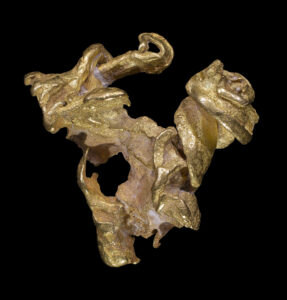 My first trip to Peru showed me one of those dark sides. During several days of travel by boat through the Tambopota National Reserve in the Madre de Dios region of southeastern Peru, I was chagrined to see numerous illegal gold mining operations. From barges in the middle of the Tambopota River, pumps are used to suck gravel and water from the riverbed. The dense gold is gravity-separated on a washing table and later mixed with mercury to further separate the gold; the excess gravel is dumped off the barge back into the river. In the surrounding rainforest, high pressure jets of water are aimed at the soft soil, excavating huge trenches that can expose former riverbeds where gold settled after washing down from the Andes Mountains (see photos, taken one year apart, below). The diesel fumes in the air and muddy, sediment-filled water surrounding these operations provide just a hint of the environmental destruction, social disruption and health hazards that are created by this illegal mining.

Curious to learn more, I came across a website with blog posts written by Barbara Fraser (http://barbara-fraser.com/ ). Barbara is a journalist based in Lima, Peru who writes about environmental and public health issues in Latin America. Her articles are published in numerous prestigious journals, including Nature, Science, Scientific American, and Discover, and she covers many topics of interest, including the mercury contamination and deforestation associated with illegal gold mining.

Check out some of her excellent articles at the links below – and find more on her website:

You can also read my original post here:  https://roseannechambers.com/gold-essence-of-the-sun/

As long as the free-market price of gold continues to rise – as it has for decades – miners around the planet will continue to seek this glittering metal. Mitigating the adverse impacts of this mining will be an ongoing challenge.

Below, aerial photos taken in 2016 (top) and then one year later in 2017 (bottom) that show the devastation from illegal gold mining in the Madre de Dios region of Peru. 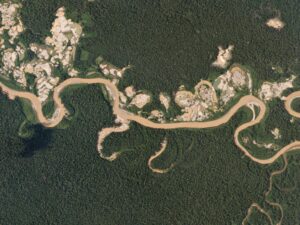 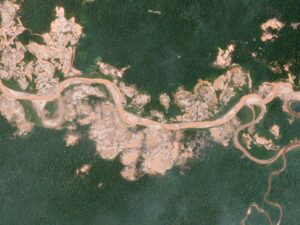 Aerial photos of devastation from illegal gold mining in Peru January 29, 2016 and January 20, 2017 by Planet Labs, Inc. – https://www.planet.com/gallery/mining-peru/ (direct link), CC BY-SA 4.0, https://commons.wikimedia.org/w/index.php?curid=57171611  (Explanation accompanying photos: The sprawling “La Pampa” gold mine has grown quickly over the years. In 2016, however, the mine spilled south of the Malinowski River, illegally entering the Tambopata National Reserve—a protected forest. The Amazon Conservation Association used Planet data to publish a series of alerts which tracked hundreds of hectares of illegal expansion and mapped alterations to the course of the Malinowski River. The Peruvian government has intervened and is now actively targeting illegally cited mining equipment inside the reserve.)