If you have bought a “healing crystal” have you thought about where it came from, who dug it out, and how much that worker earned from their labor? The grim truth might shock you. Many crystal mining operations are steeped in conflict and associated with appalling worker conditions and serious environmental degradation. Many collectors concerned with environmental impact and fair trade are seemingly unaware of this dark side–or perhaps they just don’t want to acknowledge it.

Crystals are a multi-billion-dollar business. They have become a part of the enormous wellness industry, and practitioners praise crystals for their perceived “powers”. Between 2017 and 2019, the demand for these minerals reportedly doubled in the United States. Demand soared even higher in 2020, and this trend is most likely continuing in 2021. Retailers in the industry report that sales increase during times when consumers are anxious about the news or experiencing increased stress. Certainly, lots of that has been happening recently. But better for consumers to understand the unseen costs of crystal collecting–and to find something to calm nerves that isn’t inhumane and destructive to the Earth. 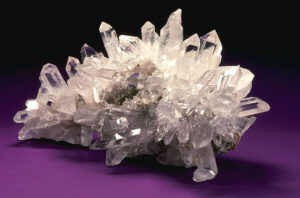 Crystals Around the Earth

Crystals eagerly sought by collectors are found around our planet. Unfortunately, some dreadful players are involved in providing them. Warlords and their allies in many countries fight to control mines and profits. Black markets, corruption, and blood mark the export of Myanamar jade. The Taliban collects millions from Afghanistan’s lapis lazuli mines. And in many parts of Africa and the island country of Madagascar, tens of thousands of children work in mines collecting rose, smoky and clear quartz; amethyst; tourmaline, and many others. An appalling reality: the small sizes of children are useful where narrow shafts and tunnels are scratched out of the rock in the search for crystals.

Small scale “artisanal” crystal mining is common. Many of these excavations are extremely unsafe, involving deep open pits or unsupported networks of tunnels, all of which are subject to catastrophic collapses. Workers dislodge rough mineral masses with picks and shovels and drag them up out of the depths in buckets. Extreme poverty drivers miners in many developing countries to work in such dangerous conditions, and even involve their children in this work. Sadly, the earnings that the locals receive for their efforts and their resources are miserably small. 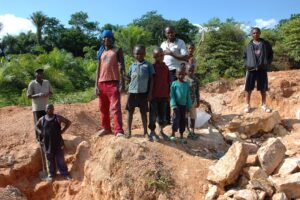 Children working at an artisan mine in Kailo, Congo in Africa

Large-scale mining operations for gold, copper, cobalt, and other valuable metallic ores may also produce crystals as shiny byproducts. In many countries with lax or non-existent environmental and labor regulations, contamination of water and wildlife resources and human-rights abuses are associated with crystal extraction. The crystal industry is unregulated, and often mining supply chains that produce crystals are enveloped in mystery. Exploitation is unseen and unchecked.

Many have documented these unpleasant realities, including international organizations such as Global Witness and UNICEF. The titles of recently published articles tell the story: Dark crystals: the brutal reality behind a booming wellness craze (McClure, 2019) and Are crystals the new blood diamonds? (Wiseman, 2019). Information is available, but many consumers simply don’t know these realities–those who do know, stay silent.

Minerals are the essential solid materials that make up the Earth. Each mineral has a distinctive chemical composition and structure–a crystal structure–in which atoms are arranged in a regular and repeating lattice network. We recognize crystals when minerals have the faces, edges, and corners that display their internal structure. All minerals exhibit their specific crystal form in even the tiniest amounts, but most mineral grains in rocks don’t show crystal faces because of the conditions under which the mineral developed. More accurately, indistinct mineral masses in rocks are crystalline substances, and we can see the micro-crystalline forms only with a microscope. 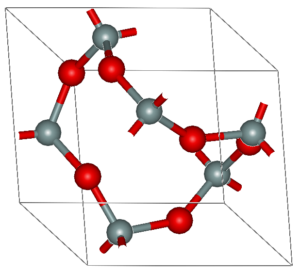 The rate of growth controls external crystal forms. Pressure, temperature, chemical environment, and presence of impurities all influence this process. When a mineral such as quartz can grow into an open space, such as inside a volcanic rock geode or undisturbed in a void such as a cavity or cave, then the characteristic crystal shape will develop–sometimes growing to extremely large sizes.

The Power of Suggestion

For thousands of years, many cultures have attributed healing properties to crystals. These include powers to balance emotions, boost low energy, and release blocked energy. In recent years, celebrities and many other “spiritual influencers” have extolled these virtues. Public appetites for alternative medicine and wellness practices have created a crystal fixation that extends from beauty treatments with crushed crystals to interior decoration with crystals installed underneath flooring.

The medical and science communities have not found evidence to support claims of healing powers. The power of suggestion–- the placebo effect — is likely responsible for the benefits attributed to crystals. If you believe something will help you feel better, there is a high probability that you will feel this effect. Crystals are beautiful and it is appealing to think they reconnect us with the Earth. Sadly, the unpleasant reality is that most crystal mining practices are causing great harm.

Companies selling crystals typically are vague or remain silent on where their wares originate. Some crystal sellers strive to source only ethically obtained crystals, but their knowledge of supply chains may be incomplete. They also may be unwilling to share specific information, as they are reluctant to give away trade secrets that give them a competitive edge.

In the United States, an independent or government body could theoretically regulate the industry using a certification process. This would be quite costly in terms of money and effort, and difficult to enforce. An international effort to prevent the sale of “blood diamonds” mined in war zones and sold to finance rebel movements was implemented in 2003, after the United Nations approved the Kimberley Process Certification Scheme. Pockets full of rough or uncut diamonds are simple to smuggle, however, and bribery and forgery can give goods a new identity, so this process has had limited success.

It is truly puzzling – a crystal conundrum–whereby crystal purveyors tout the health and spiritual benefits of owning crystals and yet stay silent about human rights violations and environmental harm. Ultimately, IF consumers question the origins of the wares they want to purchase, IF they demand ethically sourced crystals, AND they are willing to pay higher prices to compensate miners fairly, then the picture may change. Consumers have power!

There are also ways to acquire crystals with lower adverse affects. Some entrepreneurs are collecting at noncommercial sites in the United States and selling at mineral shows or on the internet. Small-scale miners can capture their finds with photos or on video, hype them on social media, and sell as many as they collect. These crystals extend from double-terminated quartz crystals (so-called “Herkimer diamonds”) in New York to the chrysocolla, turquoise, garnet, malachite, and many others found Arizona, Nevada, and other western states. The downside–crystals are not a renewable resource; they are one of a kind and the supply is dwindling.

The lowest impact activity? Simply appreciate rocks, minerals, and crystals in their natural state. They are a part of so many amazing and powerful landscapes on our planet Earth.

Atkin, E., 2018, Do you know where your healing crystals come from? The New Republic, May 11. https://newrepublic.com/article/148190/know-healing-crystals-come-from

Photo of children at an artisan mine in Kailo, Congo in Africa, 2007, by Julien Harneis https://commons.wikimedia.org/wiki/File:Child_labor,_Artisan_Mining_in_Kailo_Congo.jpg

Diagram of quartz lattice- silver atoms are silica and gray are oxygen, 2009, by Materialscientist  https://commons.wikimedia.org/wiki/File:A-quartz.png