Forests of bull kelp, with thick floating masses of brownish-green fronds, have been swaying in ocean waves along the Pacific coasts of the Americas for eons. This marine ecosystem runs intermittently for thousands of miles down the two continents and made it feasible for the earliest people migrating southward from Eurasia to reach South America. By providing a linear corridor entirely at sea level that was filled with enormous quantities of edible fish, shellfish, marine mammals, birds and seaweed, the richness of these environments allowed a rapid dispersal for ancient people in boats. We know their route as the Kelp Highway.

Who were the first Americans? Multiple lines of evidence show that people migrated from Asia into the Americas at least 15,000 and possibly as early as 20,000 or more years ago. Based on genetic and archaeological data, human settlement of both the North and South American continents happened relatively quickly, probably within 2,000 to 3,000 years.

In recent decades, archaeologists have uncovered strong evidence that the earliest migrations from Siberia took place when Asian explorers in small boats skirted the Pacific Coast as they moved south. Glaciers and ice fields that developed during from the Pleistocene era still blocked overland routes through the center of the North American continent. Beginning roughly 17,000 years ago, however, melting glaciers along the Pacific Coast opened a marine route for migration. 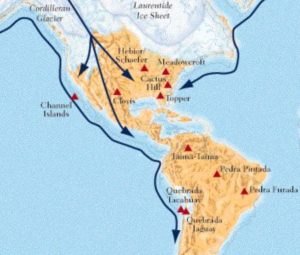 Migration routes from Eurasia into the Americas

The Kelp Highway was named in recognition of the vast and productive kelp forests that extended from what is now Alaska to Baja California, and then sporadically through Central America and along the coast of South America. The cold ocean currents flowing along these coasts were home to hundreds of species of edible plants and animals that could provide ample and dependable resources for the people traveling south. These earliest explorers would have relied primarily on the bounty of the sea, essentially making a living as marine hunter-gatherers, while also foraging for food on land. The similarity of the ecosystems they encountered over thousands of miles surely made their explorations easier as they moved southward. 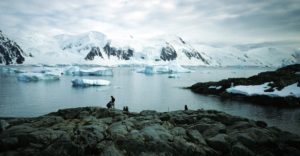 Thousands of years ago travelers on the Kelp Highway may have seen scenes similar to this one (Antarctica in 2004; Wikipedia)

The Collapse of the “Clovis-First” Model

Until a few decades ago, a widely accepted migration theory held that northeastern Siberian people traveling on foot were the first to reach the Americas. They used the Beringia land bridge, which existed when sea levels fell across the Bering Strait between Asia and North America when water was captured in glacial ice. Moving southward and following herds of animals as they traveled overland through the center of North America, they fanned out into the vast woodlands, grasslands, and forests of the continent. Distinctive stone tools known as Clovis points, and numerous Clovis-age archaeological sites have been discovered throughout North America, with a few found along the Pacific Coast into South America. These sites are dated to roughly 13,000 years ago, and possibly a few centuries earlier.

As scientists examined more archaeological sites and as they developed better dating methods, the puzzle pieces of this “Clovis-First” model gradually fell apart. Foremost among the new findings are accurately dated occupation sites that have ages several thousand years older than the Clovis sites. And some of these extremely old settlement sites are near the southern tip of South America.

Evidence for the earlier migrations is found most convincingly at the Monte Verde archaeological site in southern Chile, which contains a treasure trove of remarkably well-preserved ancient artifacts. Wooden corner posts that supported huts, scraps of animal hides used for clothing and bedding, wood and stone tools, and hearths with scattered edible foods nearby are among the artifacts recovered. Fortuitously, a swampy bog developed over this ancient settlement site shortly after it was abandoned by the inhabitants, and the anaerobic conditions inhibited organic matter decay, creating optimal preservation conditions. Multiple lines of evidence show occupation by hunter-gatherer people at least 14,500 years ago, and possibly to 18,500 or even earlier.

The first archaeological excavations at Monte Verde began in 1977 under the direction of Tom Dillehay of Vanderbilt University. When radiocarbon age dating indicated the great antiquity of the site, many archaeologists and anthropologists reacted with disbelief and outrage. Surely, they argued, the Clovis culture that is securely and consistently dated at numerous sites represented the earliest migrations into the Americans. And surely, the early dates from Monte Verde must be erroneous. Forty years, and multiple age-dating analyses later, the great antiquity of the Monte Verde site is confirmed. Clovis culture people appeared on the scene relatively late in the migration story. In a supporting line of evidence, studies of genetic data from ancient skeletons suggest that the ancestors of Native Americans diverged from Siberian populations roughly 25,000 to 18,000 years ago.

The lifestyles of the hunter-gatherers who inhabited the Monte Verde site have been pieced together from the artifacts they left behind. There is solid evidence indicating that these hunter-gatherers roamed across a wide variety of environments, collecting food from the coast into the mountains and trading with other people living in the region. Most notably, there is ample evidence of their extensive knowledge of marine resources, including the remains of nine species of seaweed found at the archaeological site.

Along the Pacific coast of North and South America, archaeologists continue to search for more evidence of early migrations on the Kelp Highway. They have found pre-Clovis occupation sites from Vancouver Island in Canada to northern California, offshore from southern California in the Channel Islands, in Baja California, and coastal Peru and Chile. Many more coastal lowland occupation sites surely disappeared when sea level rose as glaciers and ice fields melted at the end of the Pleistocene. Landscape changes from tsunamis, earthquakes, and coastal erosion have also obscured ancient habitation sites.

Fast forward about 17,000 years. Before you contemplate building a boat and cruising the Kelp Highway, foraging for your meals along the way, consider how times have changed. In Northern California, especially, giant bull kelp forests have had a tough time in recent years. A shocking estimated 90 percent of these kelp forests collapsed between 2013 and 2015, a devastating blow to the many marine creatures that rely on this ecosystem for food and protection. Warm ocean water, combined with the loss of predators, has led to an exploding population of sea urchins. These voracious urchins gnaw away at the lower stalks of the kelp, detaching the fronds from the root-like structures that anchor them to rocks, and the kelp then drifts away and dies.

In a healthy marine ecosystem, sea otters, sea stars, and fish keep the sea urchins in check. Along the North American coast, the near-extinction of otters that were hunted for their luxurious thick fur set the stage for an invasion of sea urchins. After restrictions were placed on commercial hunting of sea otter numbers in the past century, their numbers eventually rebounded, but across only a small stretch of their historic range–and many of these populations are fluctuating or in decline. Overfishing, and a virus in Northern California that decimated the predatory sunflower sea stars, have led to a vast increase in sea urchins and extensive damage to kelp forests.

Other reasons that kelp forests have been dying in many regions? Count in the usual suspects of climate change, and pollution ranging from fertilizers used in agricultural areas to sewage and stormwater discharge. Kelp requires cold water, so our warming climate, plus the El Niño weather pattern that periodically brings warm currents across the Pacific Ocean, play important roles in the demise of kelp forests in North America.

Kelp ecosystems are variable and complex, and once these systems destabilize and convert into dreary urchin barrens, then recovery and the return of kelp forests become highly uncertain. In the Aleutian Islands in offshore Alaska, urchin barrens have persisted for more than a century. 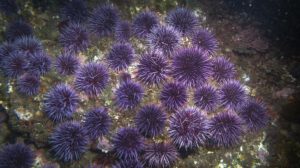 Our understanding of this ecosystem’s demise and recovery is incomplete. In 2020, kelp began returning to some areas of the Northern California coast, surprising and mystifying researchers. Colder water associated with the La Niña may be responsible, and that weather pattern has a high probability of returning in the 2021-2022 winter. Perhaps fluctuating water temperatures can be more destructive to kelp than the density of sea urchins? Time will tell. (And—La Niña may be good for kelp growth, but it will also probably extend the multi-year drought in California–not good. Read more about these weather patterns in my blog posts here: Encounters With the ENSO – Part 1 and Part 2.)

For now, there is some good news about the Kelp Highway; how the future will unfold, however, remains to be seen. Times have definitely changed since the first Americans arrived.

Bland, A., 2021, Kelp Forests Surge Back on Parts of the North Coast, with a Lesson About Environmental Stability; Bay Nature, Sept 13.

Photo of otter in kelp field in Alaska by Doug Knuth, 2004. https://commons.wikimedia.org/wiki/File:Otter_in_kelp_field.jpg