Three Ways To Survive a Tsunami

Three Ways To Survive a Tsunami

The tsunami associated with the volcanic eruption at Hunga Tonga has sparked renewed interest in hazards associated with earthquakes, volcanoes, and tsunamis. Public awareness is a good thing! I’ve seen several articles recently about geologic hazards and preparedness. One that especially caught my attention is “A Tsunami Could Kill Thousands. Is Escape Possible?” in the New York Times (Baker, 2022). The focus is on the Pacific Northwest–specifically coastal communities along the states of Washington, Oregon, and northernmost California. Based on data found in the geologic record, when – not if – a major earthquake occurs on the Cascadia subduction zone, tsunami waves as high as 100 feet (30.5 m) could inundate many low-lying coastal areas. And the waves could arrive at the shoreline within 10 to 15 minutes following the earthquake. Not good.

Around the Pacific Rim of Fire, as well as any other regions, millions of people are exposed to tsunami flooding risks. Scientists have thoroughly documented the hazards, based on many events in the historical record. There is little chance of survival if engulfed by a tsunami wave, with most deaths attributed to drowning, being hit by floating objects like trees and cars, hypothermia, swallowing contaminated water with toxic fluids and sediments, and suffocation from sand and silt in the lungs. Ugh. Whether you live near the coast, or only visit on occasional trips, awareness and preparation are important. (Ditto for recognized volcanic hazards–see my post: Something Important We Know About Volcanoes) 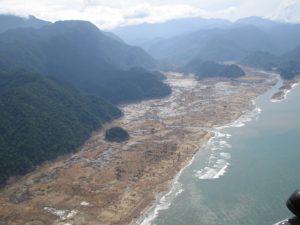 The aftermath of the 2004 tsunami associated with the Sumatra-Andaman earthquake, Aceh, Indonesia (Wikipedia)

In the Pacific Northwest, the probability that a major earthquake and tsunami could strike anytime has been recognized for decades–and slowly but surely, some communities are working on strategies to minimize the potential devastation. I’ve learned there are three ways that people might survive a tsunami. Here’s how it could happen.

If a tsunami is likely, evacuating to higher ground is the most important strategy. Retreating to a higher elevation area that will be above the possible inundation depth, knowing evacuation routes, and having sufficient time (hours, or only minutes?) to make the escape are key. Moving by foot, bicycle or a vehicle are options. Climbing a tree or onto the roof of a building are other possibilities.

In many areas, however, development along sandy coastal peninsulas or strips means that higher ground can’t be reached without several miles of travel. Driving out will be problematic in many areas. After a major earthquake, roads can be damaged by liquefaction (loss of soil strength resulting in sinking or buckling) and/or could be blocked by downed power lines, trees, and stalled vehicles. If there will be only minutes before the ocean waves hit, most people won’t have a chance.

Many won’t be able to evacuate to higher ground. Access to vertical evacuation structures that can shelter people from a surge of water will be helpful for some. Engineering designs have been around for many years, but began to be considered more seriously after the devastating 2011 Tohoku earthquake and tsunami in Japan. Vertical evacuation structures in the form of platforms and towers were used successfully in Japan during the 2011 earthquake (although some were overtopped by waves–better mapping and planning needed!). Also, observations of tsunami damage in 2011 indicated that concrete buildings sustained the least amount of damage — important data for engineers.

The first vertical evacuation structure in the US was built in 2015-2016 for the Ocosta Elementary School in Westport, Washington, a city on the central coast of the state with a large marina. The new facility is above the school gym and elevated 53 feet (16 m) above sea level. It is designed to accommodate the students and staff of the public elementary school and an adjoining junior-senior high school, plus others in the community; total capacity is estimated to be between 1,000 and 2,000 people. The structure is accessible from four wide staircases, including one on the outside of the tower. The building and shelter, constructed with 14-inch thick (360 mm) concrete and steel rebar, are rated to withstand a Cascadia earthquake of 9.2 magnitude. To secure the facility, there are 169 foundation pilings driven 50 feet (15 m) into the ground.

Washington state officials have proposed building 58 more vertical evacuation structures along the state’s coast, according to the Baker (2022) article. The estimated cost is $3 million for each structure, with a total capacity that could accommodate about 22,000 people.

One community that is especially at risk–Ocean Shores in Washington–can have as many as 12,000 people on a sandy spit during peak vacation seasons. In a major tsunami, the peninsula will be completely inundated–and at least one study has estimated that less than 10% of the population could evacuate to higher ground within 15 minutes. The City Council has apparently approved construction of a vertical evacuation structure–but it could only accommodate about 800 people (Bernard, 2022). So, what about the other thousands? How will officials resolve this potential (probable!) overcapacity issue?

Some people will be incapable of climbing steep hills, or the 5 or more flights of steps required to gain entry to a vertical evacuation structure, or for other reasons be unwilling to evacuate. There is a third option: shelter-in-place with a personal “Survival Capsule”. Yes–these really are a thing! Designed and built by an aerospace company in Seattle, Washington, the watertight and sturdy aluminum balls are available in different sizes to fit 2 and up to 10 people. Standard features include air ventilation vents and air supply tanks; amenities, such as a surround sound music system and dry powder seat toilet (really! could be useful….) are available as optional features.

I just learned about these capsules, and they have been available for several years. Check out photos and more info on this website: http://www.survival-capsule.com/Home.html — and YouTube videos here: https://www.youtube.com/watch?v=NDuacKQks0g . One drawback from my perspective: they can outfit a Survival Capsule with GPS-–so occupants will know where they are—but if the capsule washes out to sea, then what? How long might it take for a rescue to occur? Important questions!

Tsunamis are deadly–and they are certain to affect many in the global population in the not-too-distant future. In the Pacific Northwest, especially, it would be helpful if natural hazards were the major criteria for land use zoning decisions, instead of what frequently seems to be only economic considerations, but that type of change probably won’t happen soon. Sadly, once a few thousand people are left homeless, injured, or die from an event that we know will happen, then more communities may be better prepared. In the US, a comprehensive Federal solution accompanied by funding would be ideal–but also unlikely anytime soon, given the bridges that are collapsing regularly, plus other infrastructure failures. In many other countries, there are many more compelling and competing needs. Tsunami tragedies are ahead.

And now, my opportunity to climb onto a soapbox and say: pay attention to your surroundings–and trust science! If an action that could save your life is highly recommended (e.g., evacuation, vaccination) then follow instructions. Unless you have the educational background and experience of a specialist, your odds of making it successfully through some sort of danger will be greatly improved IF you follow directions. Of course, scientists don’t always have all the information and accurate answers–but they are far more informed and reliable than someone who doesn’t have a similar level of expertise. Just saying.

If you liked this post, please share it and/or leave a comment below – thanks! And if you’d like to recieve a message when I publish a new post, scroll down to the bottom of this page and leave your email address on my website. Join now to learn more about geology, geography, culture, and history.